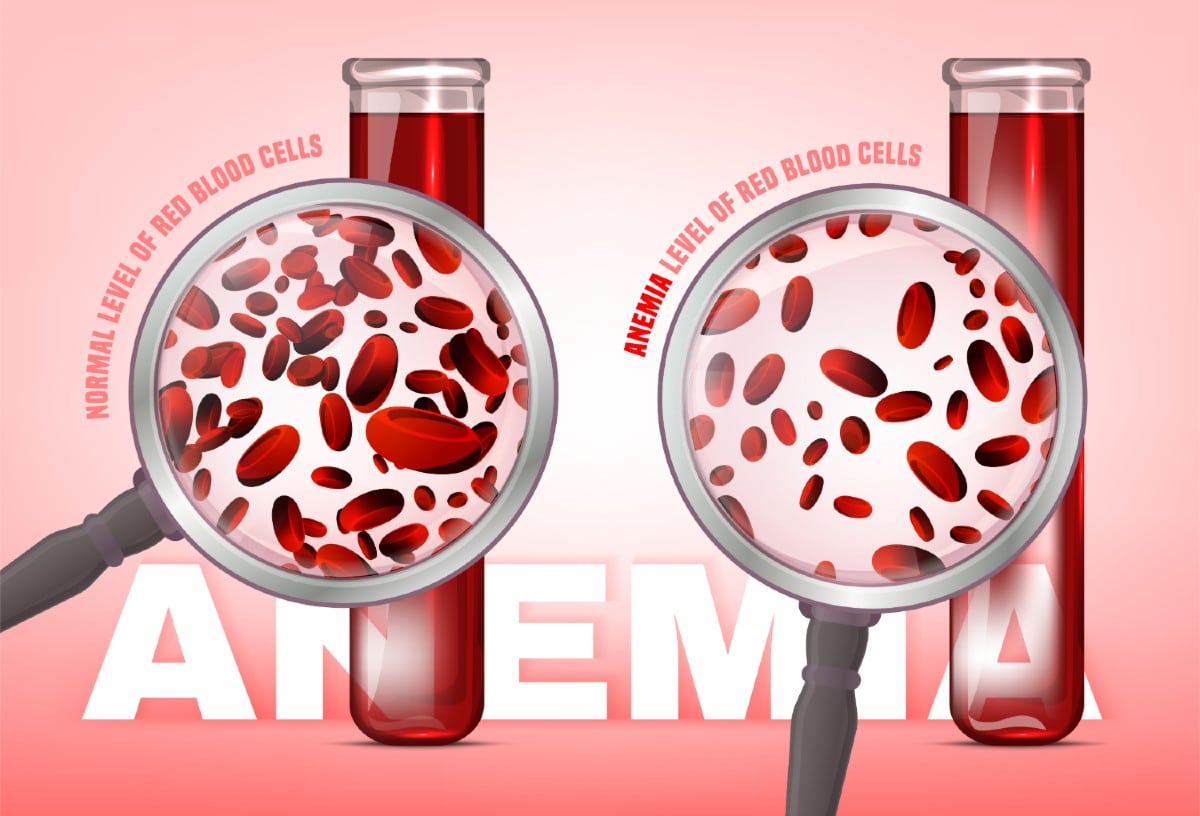 According to the CDC, a whopping 2.8 million primary care office visits annually result in a primary anemia diagnosis. As high as this number is, not much is commonly known about the condition or why certain individuals are diagnosed with it.

As with any other condition, having pre-existing conditions or participating in certain activities can make you more likely to develop iron-deficiency anemia. Here are a few…

A healthy diet should consist of balanced portions of dairy, meats, vegetables, and limited saturated and trans fat. This diet gives your body the necessary nutrients to carry out all bodily functions and sustain itself.

How Having a Poor Diet Can Cause This Condition

Having an unbalanced diet with low amounts of iron could increase your risk for anemia, particularly iron deficiency anemia.

Here are some foods that include iron:

Your small intestine is primarily responsible for the absorption of nutrients into your body. However, having an intestinal disorder can cause the intestines to malfunction. One such example is Crohn’s disease.

How Having an Intestinal Disorder Can Cause This Condition

In more extreme cases of such disorders, inflammation in the intestines can cause bleeding into the digestive tract. This scenario can potentially lead to an iron deficiency as you are losing iron-rich blood.

About twice as many cisgender females have been diagnosed with anemia than cisgender males. One reason? Most women undergo menstruation. Menstruation (“having a period”) is the process in which a woman sheds the uterine wall lining when fertilization does not occur each month.

Consequently, menopausal women are less at risk of having anemia.

How Menstruation Can Cause This Condition

When a woman menstruates every month, she is also shedding iron along with her red blood cells. Women with heavy menstrual bleeding are more likely to develop iron deficiency anemia due to losing large amounts of iron.

What is Considered a Heavy Flow?

A heavy menstrual period is typically a woman sheds over 5 ml of blood.

Like menstruation, the following risk factor for anemia can also only affect about half of the population…

A typical pregnancy lasts three trimesters (nine months) after conceiving. Women may be more at risk of anemia during this time.

How Pregnancy Can Cause This Condition

During pregnancy, the body produces blood to sustain not only itself but the unborn child as well. Without the intake of necessary nutrients such as prenatal supplements, the body may not be able to produce the desired amount of red blood cells. Thus, it is very common to develop iron deficiency anemia during pregnancy.

Other Symptoms of Pregnancy

In addition to pre-menstrual conditions, many symptoms of early pregnancy can occur. Women may typically begin to notice these signs up to four weeks after conception:

The following cause of iron deficiency anemia can affect anyone, regardless of sex…

A family’s medical history is a list of all the conditions members of the family have. It is important to know this list because some conditions are genetic, which means it may be passed on to offspring.

How a Family History Can Cause This Condition

Iron deficiency can be a genetic condition. Specifically, certain types of hereditary anemia, such as sickle cell anemia, can create abnormal hemoglobin.

This abnormality, in turn, can shorten the lifespan of a red blood cell and eventually cause iron deficiency anemia. The genetic abnormality is a large factor in diagnosing a patient with this condition because it could range from mild to severe anemia.

How You Can Determine Your Family’s Medical History

The simplest and most straightforward way to find your family’s medical history? Ask your relatives about any conditions they have or may have had in the past. It is important to know their lifestyle habits, disease history, and medications they take.

Like genetics, the following risk factor for anemia is unavoidable…

As we grow older, our bodily systems weaken and become more susceptible to malfunctions. Older people are more likely to develop chronic conditions.

How Age Can Cause This Condition

People over the age of 65 are more likely to develop an iron deficiency. This fact is due to other underlying problems they may have, such as gastrointestinal tract cancer or bleeding disorders, and an inadequate daily intake of iron.

Multiple factors can lead to this deficient intake, such as the weakening of gums and teeth that makes eating difficult, dementia that may cause one to forget to eat, or having fragile skin which allows excessive blood loss when cut.

Sometimes other conditions can trigger anemia, too…

Some examples of chronic conditions include:

How Chronic Conditions Can Cause This Condition

Chronic conditions related to the circulatory system have the potential to negatively impact the body’s production of red blood cells, leading to a shortage. Furthermore, chronic blood loss can deplete the amount of iron in the body.

8. Being a Blood Donor

Donating blood is one of the most common risk factors for iron deficiency anemia. Donating blood can be done several times a year, after all.

How Donating Blood Can Cause This Condition

By donating blood, you are frequently losing red blood cells and vital nutrients. Blood donors are at a significantly higher risk of becoming iron deficient than the general population. For this reason, it is recommended to begin a daily intake of iron supplements if you plan on frequently donating blood.

Of course, chronic conditions and donations aren’t the only ways the body loses precious blood…

Bleeding resulting from surgery is another common cause of iron deficiency anemia. For this reason, doctors monitor hemoglobin levels shortly after a patient has undergone surgery.

How Surgery-Related Bleeding Can Cause This Condition

Depending on the type of surgery, the hemoglobin levels in your bloodstream can drop significantly. This fact does not impact your ability to produce red blood cells. Rather, it is more caused by direct blood loss.

Symptoms of Bleeding After Surgery

Post-surgery bleeding is a very common concern for most patients. Here are a few symptoms that your bleeding has lasted beyond the surgery:

The final potential cause of anemia on this list? It’s coming right up…

10. Type of Milk Consumed During Infancy

An uncommon risk factor, cow milk has been linked to children being diagnosed with this condition. Although a child receives most of his/her iron stores from the mother during gestation, it is important to breastfeed after conceiving.

How Cow Milk Can Cause This Condition

By feeding a child cow’s milk during infancy, the child will not receive the necessary iron it needs. Cow’s milk is low in iron and may prevent iron from being absorbed into the bloodstream. In addition, it is possible for intestinal bleeding to occur from a heavy intake of cow’s milk.

Excessive intake of cow’s milk is defined as consuming more than 24 ounces per day. The introduction to cow’s milk should not be done before one year of age.

However, it’s always important to discuss options for feeding your child first with a pediatrician.

What’s most important for someone who has this condition to know?…

If you believe that you may have this condition based on the list of symptoms and risk factors provided above, it is best to meet with your primary care physician and schedule an appointment for a blood test. A blood test will indicate whether the iron levels in your body are low.

If you are unavailable to meet with your physician, there is an at-home test available for purchase that diagnoses iron deficiency anemia within sixty seconds. This disposable device uses a single drop of blood to monitor your iron levels, changing color to indicate different levels of anemia.

Other Less-common Methods for Treatment

In some cases, the physician may prescribe intravenous iron therapy or blood transfusions. These treatments are usually common for patients who had been diagnosed with severe iron deficiency anemia that cannot be treated by diet changes or supplements. Patients who have undergone these procedures have commented that they experienced weight gain.

Iron deficiency is one of the most common conditions in the United States. It is best not to worry if you have been diagnosed with mild anemia because it is easily treated. More severe cases would require lifestyle changes as well as frequent doctor visits.