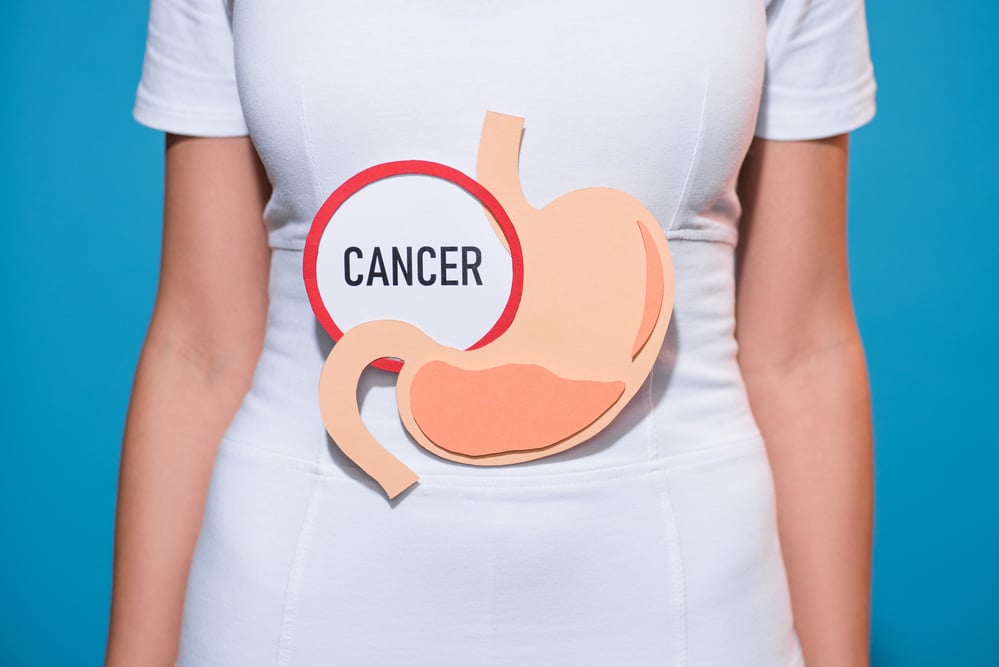 Stomach cancer, also referred to as gastric cancer, affects over one million people each year around the world. While stomach cancer typically targets people older than 55, stomach cancer can occur in people at any age.

The symptoms of stomach cancer typically start off slow and worsen with time, making it important to catch it early. Signs and symptoms of this disease can include…

As you may have guessed, stomach cancer and stomach pain often go hand-in-hand. When a build-up of cancerous cells takes over your stomach lining, a tumour is eventually formed. This tumour often causes a full, swollen feeling, or in rarer cases, a sharp and stabbing pain.

While this symptom isn’t an early sign of stomach cancer, it’s certainly one that shouldn’t be ignored. That being said, make an appointment with your doctor if you experience noticeable stomach pain that doesn’t seem to go away.

While stomach cancer typically goes undetected for years before warranting diagnostic testing, bloating is one of the earliest symptoms associated with the disease. Patients usually bloat with this type of cancer because of the amount of fluid that builds up in the abdomen over time.

More often than not, stomach cancer patients experience difficulty swallowing, also called dysphagia. This can happen before, during, or after treatment, and is caused by the location of the tumor in the stomach.

With stomach cancer, it can take longer to chew and swallow, coughing or choking can occur while eating or drinking, and food may stick in your mouth or throat like a ball.

Since eating is often a less enjoyable process with stomach cancer, this can lead to unintentional weight loss…

No matter the type of cancer, patients typically experience unintentional weight loss due to anxiety, depression, difficulty swallowing, or a loss of appetite. If you notice a drastic change in your diet or your weight, visit your doctor, as this is a sign of an underlying illness.

This next symptom is common among all types of cancer patients…

Nausea can be linked to numerous causes, one of them being stomach cancer. Nausea is typically linked to the side effects of cancer treatment, but it can be an early sign that links to cancer. A tumor in some part of the bowel, for instance, could lead to nausea.

The next symptom is typically a result of nausea…

Nausea can often cause vomiting due to the lining of the stomach being inflamed and irritated. When there is a build-up of cancerous cells within the stomach, it’s likely for stomach cancer patients to experience vomiting regularly. Especially after treatment like chemotherapy, vomiting is bound to happen.

After vomiting, this next side effect often develops…

Along with indigestion, heartburn is often a side effect of stomach cancer. While this symptom isn’t extremely common among patients, it is something to look out for. Especially if your heartburn has become more frequent and severe, see your doctor.

Some symptoms of stomach cancer are more visually noticeable than others…

Jaundice can be marked by the yellowing o the skin as well as the whites of the eyes. This condition is typically caused by too much bilirubin in your blood, which is a yellow-orange substance. Jaundice usually only appears when cancer spreads to the liver of bile ducts, which causes the bilirubin level in the blood to increase.

Stomach cancer can use up a lot of your energy, as shown by this next symptom…

If you’ve recently been fatigued for more than a few days or weeks, it’s often something to be concerned about. While fatigue can be caused by numerous factors, fatigue related to stomach cancer is due to blood loss. This blood loss, typically in stool, causes anemia.

Anemia causes an iron deficiency, leaving patients tired and short of breath. If you’ve noticed a dramatic change in your energy levels for an extended period of time, seek medical help, as this is a sign of stomach cancer.