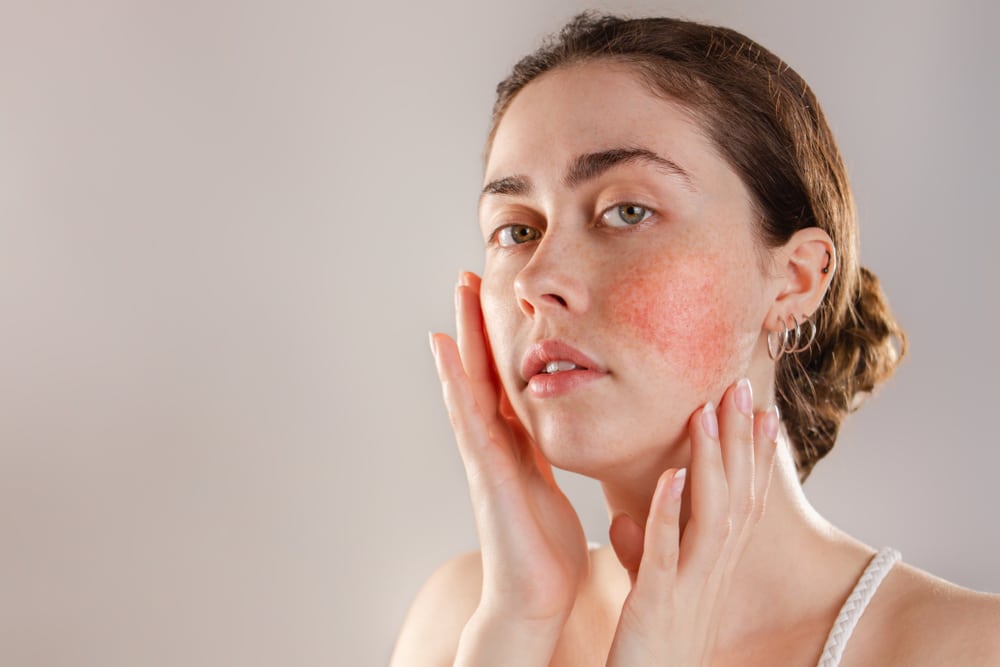 Rosacea is a skin condition that causes redness and blood vessels to appear in the face. It can happen to anyone in their 30s-50s, especially women, and those who are light-skinned.

Because rosacea can be an uncomfortable medical condition to live with, it pays to know common symptoms, like the following…

People who suffer from rosacea appear to have frequent facial redness or blushing in the middle part of the face. This is considered the earliest sign of this condition, and when left untreated, could become permanent.

Rosacea makes small blood vessels swell and become more visible on the skin. This adds to the redness of the face, especially for Caucasians and other fair-skinned people.

The following symptom of rosacea can be pretty noticeable…

Rosacea-induced edema can make the face look visibly swollen and puffy at times. This could be a result of the increased blood flow to the face which causes the aforementioned blushing.

Another unmistakable rosacea symptom is the skin negatively reacting to things like sunlight, hot or cold temperatures, certain skin products, and stress, which can all cause burning, itching, stinging, and painful sensations.

If that wasn’t bad enough, rosacea can leave your skin feeling like a desert..

Many rosacea patients might also notice their skin getting considerably drier and rougher during the course of this condition. However, other cases report having oilier skin, or both.

The following is usually a result of dry skin…

6. Patches On The Skin

Apart from swelling, raised, red, scaly patches or plaques also start to appear on the skin. Additionally, the areas surrounding these plaques can sometimes feel itchy and tender.

Another common symptom of rosacea is…

People suffering from rosacea also develop clusters of bumps that can be mistaken for acne breakouts. Sometimes, these bumps contain pus and are usually painful to touch.

Your sniffer might become more noticeable than ever with rosacea…

While more women suffer from rosacea, men do, too. Over time, rosacea tends to make the skin thicken after a while, causing the nose to look larger than normal.

But that’s not the only thing that could swell…

Many people with rosacea also experience what is known as ocular rosacea. This is when the eyes become dry, irritated, and swollen. In some cases, ocular rosacea manifests itself first before skin problems.

Some things become more noticeable than ever, like the following…

All the bumps, plaques, and other symptoms caused by rosacea eventually take a toll on the skin and cause pores to enlarge and become more noticeable. Another factor behind this could be excess tissue growth.