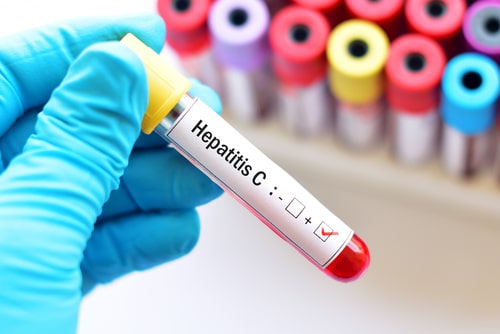 Hepatitis C is a serious liver infection caused by Hepacivirus C (or HCV, the hepatitis C virus). The World Health Organization estimates that about 71 million people worldwide suffer from it, but the tricky part about it is that it rarely shows any symptoms, which leaves many cases undiagnosed.

When hepatitis C does display symptoms, the following might appear…

One of the first symptoms of hepatitis C, jaundice is the condition where the sclera (the white outer layer of your eyes) and the skin start to yellow. This skin discoloration is caused by a buildup of a yellowish substance called bilirubin. This buildup happens if the liver doesn’t function properly.

Aside from having yellowish eyes and skin, the following can also change color…

Dark urine is another telltale sign of hep C. With this condition, the kidneys cannot properly process nutrients and fluids, leading to darker urine.

Urine won’t be the only thing that’s strangely colored, as our next symptom clearly shows…

The normal brown stool color is caused by the bile salts released by the liver. With an infected liver, fewer bile salts are produced. As a result, the stool will come out looking a bit pale or clay-colored, which might mean you have hepatitis C.

As the liver fails to function well, the effects slowly start to take its toll on the rest of your body…

Studies have attributed hep C’s frequent spells of fatigue to the fact that the body exhausts itself fighting against the virus. However, Dr. Nancy Reau, a member of the American Liver Foundation, claims that fatigue is a common problem and can’t always be directly linked to the virus. Still, it’s a symptom to look out for.

Regardless of its origin, fatigue can exacerbate hep C problems, and sometimes it can lead to…

Fever is one of the more common symptoms of having hepatitis C. Like fatigue, fever is an effect of the body’s immune system trying to kill the virus. Specifically, the body raises its temperature in an attempt to kill the virus with heat.

Our next symptom accompanies almost all kinds of infections, and hepatitis C is no exception…

Appetite loss, although a common hepatitis C symptom, baffles medical experts as to how the virus triggers it. Some researchers have attributed it to changes in taste. Further research is needed to fully determine why hepatitis causes this change in taste, though.

Like loss of appetite, expect the following symptom to appear as well..

Being nauseous is another common side effect of many viral infections, including hepatitis C. But it can also be because of treatment or medication, as some drugs like ribavirin are known to cause such effects. So, nausea alone cannot definitively indicate a hep C infection. When paired with other hep C symptoms, though, it could be a cause for concern.

Oftentimes, nausea can lead to the following…

Nausea almost always leads to vomiting. In advanced cases of hepatitis C, occurrences of vomiting blood have been reported due to bleeding in the lower esophagus. Patients vomiting blood should seek emergency medical attention right away.

A patient suffering from hepatitis C may experience bouts of sharp, stabbing pain in the abdomen. Specifically, it may occur on the right side just below the ribs, right where the liver is located. Based on what patients usually experience, the pain does not last very long.

Hep C also makes us susceptible to our last symptom…

Ascites is the abnormal buildup of fluid in the abdomen. Due to its effects to the liver, people who have or have had hepatitis C are considered susceptible to this condition. Patients may suffer an increase in abdominal size, weight gain, shortness of breath, and abdominal pain when suffering from ascites.

Hepatitis C, even with its many forms and symptoms, is relatively curable. You are considered clear for the virus if your blood tests negative three months after receiving treatment.