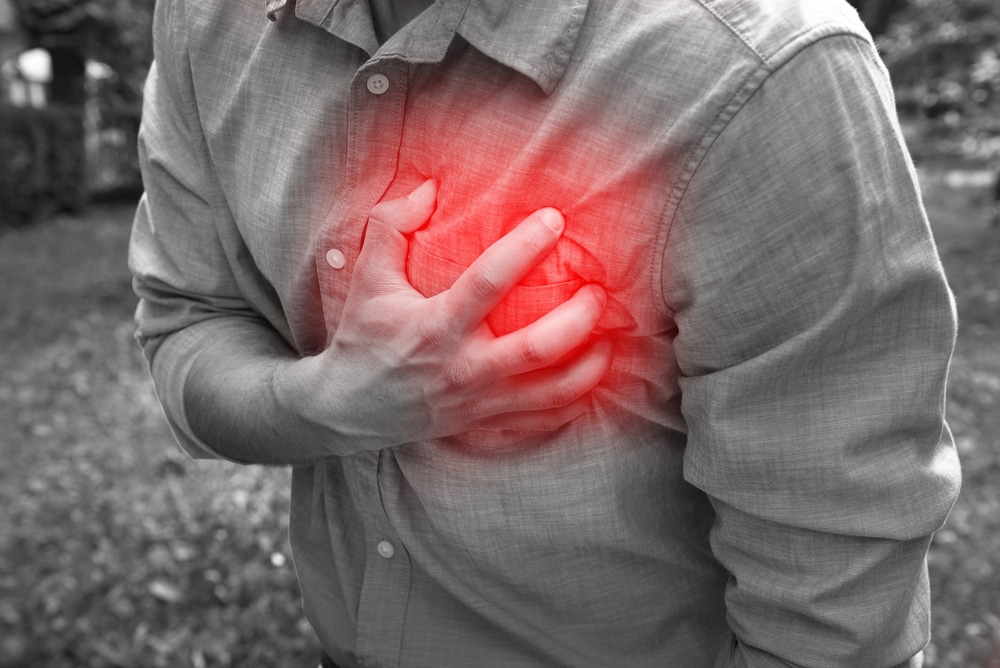 Mitral valve prolapse (MVP) happens when blood leaks backward through the mitral valve in the heart, instead of closing properly. About 2% of people in the United States suffer from MVP, either inheriting the risk or through other health problems, according to the American Heart Association.

People with MVP often complain about having heart palpitations, arrhythmia (irregular heartbeats), fluttering, or their heart beating too hard or too fast (tachycardia). According to research published in the American Family Physician, problems such as palpitations can be attributed to premature ventricular beats.

As a result, patients are likely to suffer from the following…

Unlike chest pains caused by coronary artery disease, MVP chest pains are different. These chest pains might be caused by the valve closing when the heart rhythm is normal. Or, the might occur as a result of irregular heartbeats and palpitations and may also occur more often.

The next symptom can leave you feeling breathless…

Mitral valve regurgitation occurs in some cases of MVP. This is when the blood leaks backward into the atrium from the ventricle, and the resulting backflow of blood affects the muscles of both the atrium and the ventricle, causing shortness of breath. You may feel winded or like you can’t breathe, two severe symptoms that call for immediate medical care.

MVP affects the lungs in other ways that’ll leave you catching your breath, too, just like the next symptom…

Aside from dyspnea, people with MVP tend to experience coughing every now and then. This cough is usually a dry one, and it might also be caused by the aforementioned symptoms. If you’re worried about irregular coughing, talk to your doctor about potential reasons why you are coughing more than usual.

And, MVP can take a toll on your whole body as the next symptom shows…

Fatigue, like dyspnea, also happens as a result of mitral valve regurgitation. When the oxygen and nutrient-bearing blood goes back to the heart, it causes you to feel weak and lightheaded, even if you’ve been active or have been resting.

The next symptom will make your head hurt…

Along with fatigue, nauseating migraines have also been noted to be prevalent with MVP sufferers. Although the connection between migraine and mitral valve prolapse is still unclear, Dr. Daniel Lee Kulick believes that it might have something to do with the tension in the blood vessels in the brain.

MVP-induced arrhythmias, palpitations, fatigue, and dizzying spells can be so severe at times that they can take their toll on the heart, causing the person to pass out unexpectedly.

This next symptom leaves you tingling, and not in a good way…

In some cases, patients with MVP experience occasional numbness and tingling in parts of their face, arms, hands, and feet, especially in the fingers and toes.

But it doesn’t stop there…

9. Swelling In The Legs And Feet

Mitral valve regurgitations can sometimes result in edema, which brings about swelling in the legs and the feet. This, along with the numbing, makes the daily grind especially difficult.

Not all symptoms manifest themselves physically, just as the final symptom on our list shows…

Anxiety, panic attacks, and depression are often seen in people with mitral valve prolapse. Like fatigue, Some physicians link these mental health problems to the imbalances of the autonomic nervous system.