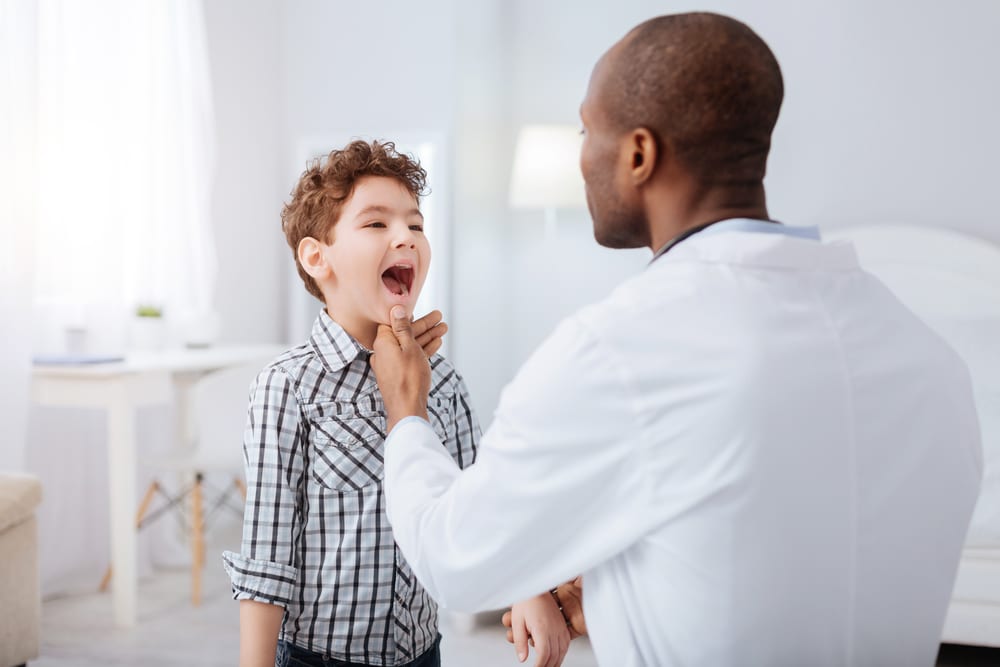 Strep throat is a condition where the throat and tonsils become infected. It’s an infection caused by group A streptococcus bacteria and constitutes about one-third of sore throat cases in children and adults.

But how do you know when you have one?

One of the primary symptoms of step throat is, of course, throat pain that comes on quickly early on. It’s more painful than an ordinary sore throat and is generally described as having a “burning” sensation that lasts throughout the day.

Of course, it’s bound to cause some problems…

The pain that strep throat infection brings tends to flare up now and then. As a result, eating and drinking become pretty challenging for people who have it since they can barely swallow or gulp anything comfortably without flinching.

The following also contributes to that problem…

With strep throat, the tonsils become red and swollen, usually accompanied by white spots or patches. In some untreated strep throat infections, “pockets” of pus called peritonsillar abscesses begin to form around the tonsil area.

But that won’t be the only part getting “spotted”…

A common symptom of various viral or bacterial infections like strep throat is the appearance of clustered, tiny red spots or bumps called petechiae that appear on the palate (the roof of the mouth). Sometimes they also vary in color.

Some things tend to “swell” out of proportion…

The lymph nodes often swell near an infected area of the body, so in this case, the lymph nodes in your neck tend to swell and are also quite painful to the touch. They remain swollen for a couple of days and or even weeks at a time.

These could very well be “red flags” for something else…

You might notice some rashes appearing on different parts of the body, especially in the neck, underarm, elbow, or groin areas. These rashes often evolve from their usual red marks into tiny bumps that are rough to the touch.

People suffering from strep throat infections are likely to develop scarlet fever (scarlatina) in the process, with the rashes mentioned above being its primary symptom. This condition mainly afflicts kids aged 5 to 15.

The whole experience can be pretty nerve-racking indeed…

If you don’t have a fever during a strep throat infection, you’re still likely to experience some headaches since they are a typical body response to bacterial infections. Typically, these go away on their own after a few days.

The cold can really bother you at times…

Strep throat can likewise cause some bodily chills, which usually accompany and worsen other symptoms like headaches and fevers. Most of the time, the chills precede the onset of scarlet fevers before they occur.

Sometimes it cooks up quite a storm in your insides…

Frequent nausea and vomiting are relatively common among strep throat patients, but it’s seen more among younger children than adults. In some rare instances, however, it’s also known to cause diarrhea.

Travel Facts - Amazing Things to Do In Calgary