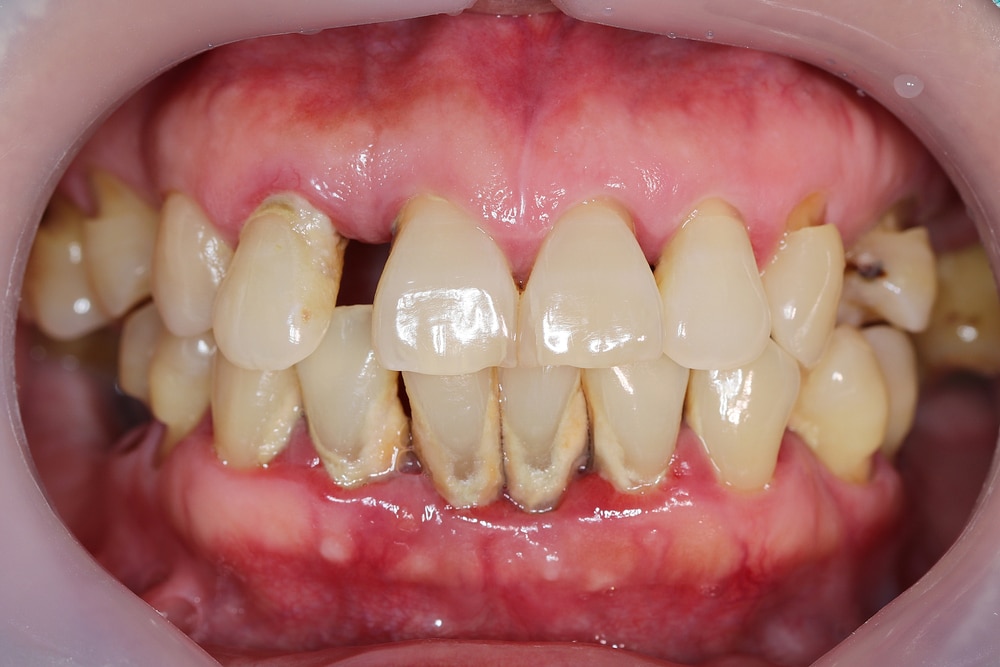 Periodontitis, otherwise known as gum disease, occurs due to untreated gingivitis, which is the inflammation of the gums. This condition can damage the soft tissue around the teeth and cause plaque buildup beyond the gum line, which can also lead to infections.

Thankfully, though, gum disease symptoms are fairly noticeable and treatable.

Healthy gums are generally pink and firm, so it doesn’t come as a shock that one of the first, more obvious signs of gum disease is the gums being redder than usual. Some patients even report dark red gums, which is just another sign of gym disease.

This next periodontitis symptom is hard to miss.

Swollen gums that last beyond a week are another symptom of gum disease. Apart from that, the gums also become painful and tender to the touch, which can make eating and brushing uncomfortable.

Aside from gum inflammation and tenderness, periodontitis can easily cause the gums to bleed during brushing and/or flossing. Though sometimes, gum bleeding may be the result of ill-fitting dentures or vigorous brushing.

Hairlines aren’t the only thing that can recede, as the following symptom of gum disease explains.

Gum recession is when gum tissue starts to pull away from the teeth, which then destroys and exposes its roots. Spaces called “pockets” form between gums and teeth, which can lodge oral bacteria.

Speaking of bacteria, it can be the cause of the following primary gum disease symptom.

Having bad breath with periodontitis can be a lot worse than on an average day. It has a distinct “rotting” odor, possibly due to the bacteria in the pockets that cause the gum tissue to waste away.

And, bad breath can quite literally leave a bad taste in your mouth.

6. Foul Taste In The Mouth

You might also notice a foul, metallic taste in your mouth even if you haven’t eaten anything. This condition also occurs with other dental problems such as infections, abscesses, and growing wisdom teeth.

The pockets that form between the teeth and gums can harbor food particles and bacteria. This can lead to infections, which cause pus to develop and even ooze.

Having crooked teeth is a lot more inconvenient than you think, like the next gum disease symptom shows.

Malocclusion is when the teeth become crooked or misaligned. It can affect speech, biting, and chewing. Because severe plaque formations usually occur with this condition, it can sometimes lead to periodontitis.

Gum disease can wreak pain in other areas of the mouth, like the following.

Because gum tissue recession exposes a tooth’s roots and nerves, the teeth can become increasingly sensitive, especially when eating or drinking something extremely hot or cold.

In severe cases, gum disease can cause severe and irreparable damage.

In cases of rapidly progressing periodontitis, once the bone tissue wears away, teeth become looser and sometimes move about from their original positions. Some teeth can even fall out completely.