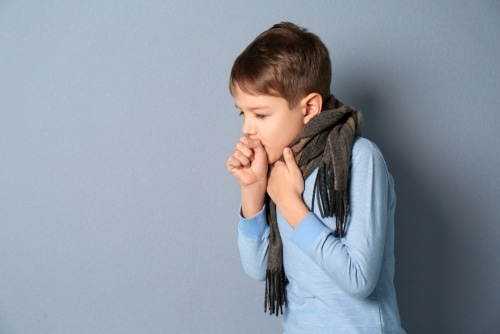 Whooping cough (also known as pertussis) is an infectious, life-threatening respiratory disorder that causes violent, hacking coughing that makes breathing difficult. Annually, there are an estimated 24.1 million cases and about 160,700 deaths worldwide, according to the CDC.

Children, especially non-immunized babies who are 6 months old and below and 11-18-year-olds with diminished immunities experience the following symptoms…

Starting with the primary symptom, these strong coughing fits usually last for up to 10 weeks or more, which is why some refer to it as the “100-day cough.”

But what makes whooping cough different from ordinary coughs?

After the hacking coughs, it’s usually followed by squeaky-sounding breathing that sounds like “whoop”. This is what gives the condition its name.

And, it causes the following dangerous symptom…

3. Pauses In Between Breathing

For babies with whooping cough, they might experience apnea, which creates a pause in the breathing pattern. In other words, it causes breathing problems and even stops breathing temporarily.

You’ve heard of feeling blue, but what about looking blue?

The stress of the severe coughs can cause slight bleeding under the skin, which then turns the face red. Breathing problems, on the other hand, can cause cyanosis, which is when the skin turns blue due to low oxygen levels in the red blood cells.

In most cases of whooping cough, children usually experience the symptoms of a cold. Having a runny nose, for example, affects a certain number of patients and it heightens discomfort.

But what’s worse than having a runny nose?

Nasal congestion in itself makes breathing through the nose strained and difficult, and even more so for those with whooping cough. It increases breathlessness during severe coughing fits, but it usually clears out in a matter of days.

Talking and eating are also much more difficult with pertussis…

As whooping cough is a bacterial infection, having a viral sore throat is likewise seen as one of its first symptoms along with colds. The throat can also get irritated by the severe coughing spells.

And that’s not the only thing the coughs can trigger…

Sometimes, the severity of the coughing can cause children to regurgitate and vomit food during or after such fits. As such, they have a tendency to either stop eating or have small meals instead to avoid this.

All this coughing can tucker you out after some time…

Fatigues are a result of the body fighting off viral infections, though whooping cough’s bouts of coughing in itself can leave a patient exhausted.

And oftentimes, the cold and fatigue both bring in…

Fevers that come with whooping cough are usually low-grade and normally don’t last longer than two weeks. Otherwise, it could mean something more serious.