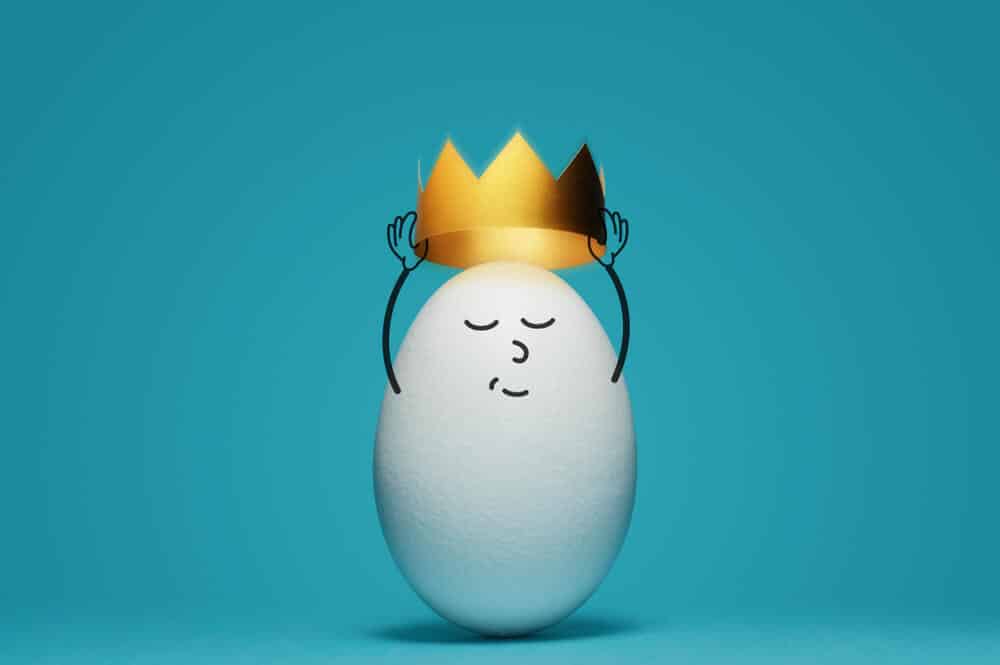 While the term “narcissist” is tossed around a lot, it technically refers to narcissistic personality disorder, or NPD. Experts estimate that about 1% of the US population has diagnosable NPD.

What are the signs of narcissism?

The Diagnostic and Statistical Manual of Mental Disorders (DSM) lists nine criteria for NPD, although many people do not meet all of these nine characteristics. To be diagnosed with narcissism, someone must meet just five criteria.

However, narcissists often show many other symptoms aside from what’s listed in the DSM. Coming up are some of the hallmark signs of NPD, starting with the following volatile trait…

10a. Extremely Reactive to Perceived Criticism

A classic hallmark of narcissism is a strong, negative reaction to any perceived criticisms.

No one really enjoys criticism, and many people naturally feel defensive when criticized. A narcissist, though, takes it to a different level. Narcissists do not handle any type of criticism well at all.

This mishandling leads to:

Specifically, when faced with even minor criticism, narcissists show an incredible lack of receptivity (as in, they do not accept the criticism). Despite their rejection of outside criticism, they are also quick to criticize others.

10b. How this Symptom Manifests

Someone with narcissistic personality disorder may react to even minor perceived criticisms or negative comments in a variety of ways. When faced with questions, comments, or feedback that may force them to admit failing, fault, or vulnerability, they may:

All in all, narcissists don’t always show when criticism threatens them, but reactions tend to be over the top, highly defensive, and explosive. It’s all to defend the following classic trait of NPD…

9a. Grandiose Sense of Self-Importance

The defining characteristic of NPD? A sense of superiority that is unrealistic and goes beyond typical vanity.

A narcissist’s sense of superiority is unrealistic.

Grandiosity (pretentious self-importance) develops in people with narcissism to cope with very strong insecurity and (somewhat ironically) low self-esteem. Specifically, an inflated sense of self helps them avoid these deeply rooted negative and painful feelings.

9b. How this Symptom Manifests

There are several ways this symptom will manifest in narcissists.

A narcissist’s grandiose sense of self-importance directly leads to another hallmark of NPD: an incredible sense of entitlement.

This sign is so strong that narcissists are known to view other people as extensions of themselves and only existing to serve them in some way.

Narcissists view themselves as special and different than others. This notion means they believe they deserve what they want, when they want it.

A narcissist’s needs will always come first over everyone else’s, even their own children. This sign can therefore manifest in many ways, such as expecting special favors and expecting others to comply with their expectations without question.

What happens when someone refuses to comply with a narcissist’s demands? Nothing good. When others don’t comply with their wishes or expect something in return, a narcissist may react with anger, aggression, or a cold shoulder.

A narcissist’s sense of entitlement typically leads them to exploit others without guilt. In other words, they don’t feel guilty about taking advantage of friends, family members, and acquaintances to get what they want.

Narcissists can’t identify with others. So, they view others as existing solely to serve their needs. This tainted view directly leads to exploitation.

Importantly, this exploitation can be either malicious or, more commonly, because they simply do not consider how their behavior affects anyone else. When it’s pointed out, they cannot empathize.

There are many ways in which a narcissist may exploit others. For instance, they may use intimidation, bullying, or demeaning behavior. They additionally may use deception and emotional manipulation to get others to do what they want.

Narcissists can operate in different ways to get what they want, which means narcissistic manipulation can be either positive or negative, depending on the situation.

One of the trademarks of narcissistic personality disorder listed in the DSM is a constant need for admiration.

It all ties in to the narcissist’s overblown ego.

This trait is directly related to the narcissist’s over-sized ego and sense of entitlement. When a narcissist isn’t receiving praise, they are waiting for or planning the next moment of praise.

The narcissist’s ego may be very large, but it’s also very fragile. That means narcissists require frequent admiration and praise. In other words, narcissists are typically hiding a great deal of shame and low self-esteem that they can’t recognize in themselves. So, they need external praise to support their grandiosity and keep negativity at bay.

Narcissists often surround themselves with people who will cater to their needs with praise and recognition. They may talk frequently about themselves and their perceived talents and accomplishments in a bid for praise.

When they don’t receive what they want? They react with anger or a cold shoulder.

Of course, a narcissist is not only preoccupied with praise from others, but also with fantasies and bizarre takes on reality…

Reality doesn’t support a narcissist’s inflated view of themselves. Therefore, many live in a fantasy using self-deception and distortion of fact. For example, a narcissist may spin a tale for themselves of unlimited or unsurpassed power, intelligence, beauty, or love.

A narcissist believes they are the best and deserve the best. Now, they expect to be recognized for this without any accomplishments that warrant the recognition. They also preoccupy themselves with fantasies of achieving what they believe they truly deserve.

You may hear a narcissist telling stories of selflessness, great sacrifice, supreme beauty, or a great love… that’s really just rewritten history and based on self-delusion.

Making relationships is strategic for narcissists.

Narcissists tend to actively seek out relationships, including romantic partners and friends, with positive or valuable qualities because they consider themselves superior. They are therefore attracted to those they feel are similar.

Of course, even as they seek these relationships out, they are not without problems…

Envy and narcissism are strongly linked. In fact, it’s often said that narcissists are envious of what others have while simultaneously believing that everyone else is envious of them.

There are several reasons this envy may blossom in narcisstists.

Narcissists often dismiss others’ feelings as envy, whether true or imagined. Their envy may also drive them to sabotage the success of loved ones, undermine their happiness, and belittle accomplishments that aren’t their own.

How could someone do that to a loved one? It’s all because of the following trademark of narcissistic personality disorder…

One of the hallmarks signs of narcissism is a lack of empathy. Essentially, narcissists have a very grand sense of self and entitlement with little thought or understanding about how others are feeling.

Narcissists cannot deeply connect with the emotional needs of others.

Now, a narcissist can recognize the basic needs of others. However, this recognition is only rudimentary; it lacks understanding about the nature of feelings and why they feel the way they do.

The result? Narcissists often feel that others’ emotions are caused by something or someone outside of themselves, rather than their own thoughts and interpretations.

Narcissists are driven by entitlement, exhibitionism, and self-delusion. Their grandiose sense of self and fantasy world cause them to view others as extensions of themselves without “real” emotions or needs.

Does that mean narcissists can’t feel empathy ever?

No. Unlike someone with psychopathy, a narcissist doesn’t lack the ability to feel empathy. In fact, under the right conditions—such as when they’re prompted to imagine how someone else feels in a movie or book—they can empathize. However, this empathy is rarely on display in real interpersonal relationships.

If they can empathize, why don’t they?

In most cases, narcissists don’t empathize with others because they simply don’t pay attention to how others feel and don’t give their emotions any priority. When a narcissist does empathize, it’s usually in a self-interested manner, as a tool for manipulation or otherwise for their benefit.

A narcissist will ignore the concerns of others, no matter how valid, and continue behavior that they believe will give them what they want. People in a relationship with a narcissist can lose their feelings of intimacy and experience self-doubt.

2. Projects Negative Qualities Onto Others

It is important to note that this sign isn’t a trait on the DSM to diagnose narcissistic personality disorder. That being said, a common hallmark of the disorder is a tendency to focus on the perceived negative qualities of others and/or project one’s own insecurities and weaknesses onto others.

Narcissists are strongly compelled to reject any admissions of weakness, deficit, or failings in themselves. This compulsion often leads them to redirect negative appraisals onto others to avoid seeing themselves in the appraisal.

In other words, narcissists lack self-insight. So, they feel good about themselves when they put down others and focus on the flaws of others—even if they don’t exist.

Narcissists often project their negative feelings onto others to avoid feeling them themselves. They may accuse friends and family members of not putting them first, being selfish, being unsupportive, or being mentally ill.

While narcissists project themselves as important and superior, their behavior all stems from one core trait…

A narcissist will try not to show it—and might not even believe it about themselves thanks to a superficial sense of superiority—but a core hallmark of narcissistic personality disorder is low self-esteem.

Narcissists create false personas with grandiosity, a sense of entitlement, and a strong reaction to criticism.

To protect their fragile inner selves and deep feelings of shame. In reality, most narcissists have a great deal of insecurity under the surface. This insecurity causes them to push themselves to prove they are superior.

The low self-esteem of a narcissist becomes apparent with constant fishing for compliments and exaggerated boasting about real or imaginary achievements.

What’s the number one thing to know about narcissists?…

Many people with narcissistic personality disorder (NPD) do not realize anything is wrong. That means it’s uncommon for people with NPD to seek treatment.

What happens when someone doesn’t treat NPD?

Without treatment, particularly behavioral therapy, NPD can lead to:

People who are close to someone with NPD can also suffer. After all, narcissists can be very charming and skilled at creating a positive self-image and navigating social situations. It can therefore be easy to get drawn into another’s confidence, especially for people who have self-esteem issues.

What should someone in a relationship with a narcissist do?

In any type of relationship with a narcissist, it’s important to find emotional support elsewhere, avoid taking things personally, and set healthy boundaries.

While narcissistic personality disorder can’t be cured, it is very treatable. With therapy, people with narcissism can learn to develop a healthier sense of self, accept responsibility for their behavior, and set realistic goals in life.