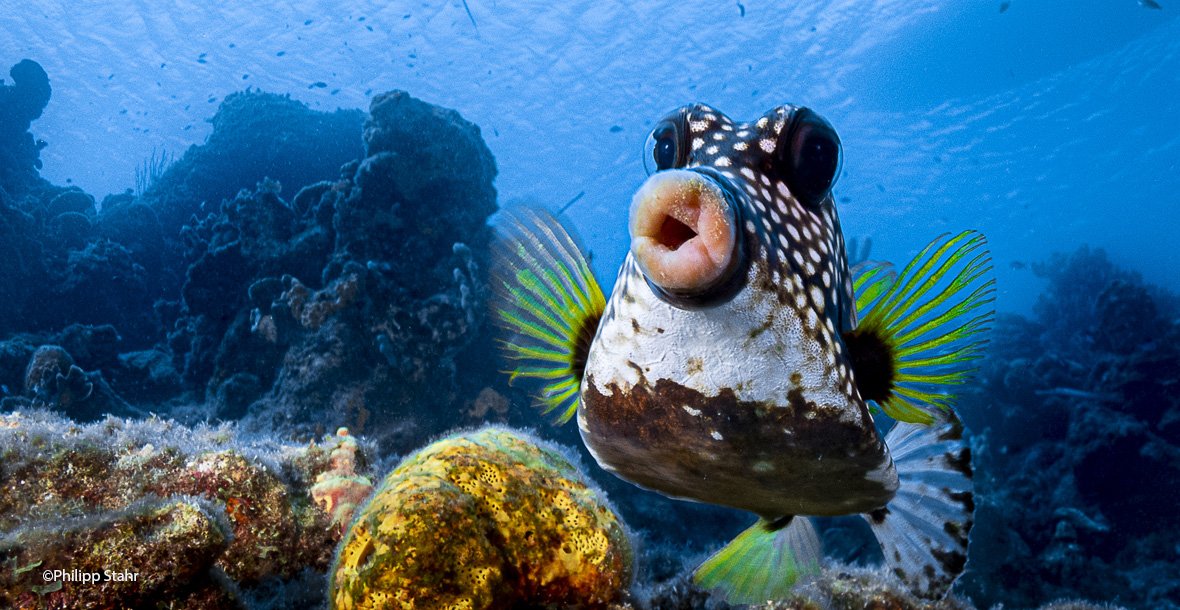 We can all agree animals are the best. Our collective agreement is made evident by the number of photos we post of our pets, as well as the percentage of the Internet’s content that’s been officially taken over by how cute our dogs look when they sleep and how hilarious our cats are when we dangle shoelaces in front of them.

That being said, THESE animal photos are in a league of their own! I’m sure if we had access to the wild like these photographers do we would have captured these moments, created a dedicated Insta account, and Snapchatted them to our friends and coworkers.

Since we don’t have time to roam about the wild, we’re glad other people do. These hilarious moments are proof that animals are people, too!

Click next to see these phenomenal photographs and let us know your personal picks!

“Sweet-Lips Are For Kissing” by Philipp Stahr

According to Stahr, boxfish are difficult to photograph. While they do not mind a diver coming close, if they sense you show interest in them, their tendency is to shy away and leave. Having that in mind, he successfully captured this rare image of a boxfish, seemingly protruding its lips from the seas of Curaçao, Dutch Caribbean.

Featured in this picture is a young lion in the Serengeti National Park, Tanzania. Querzani, who took the photo, believes that “apparently [young lion] is laughing at my photography skills.”

These penguins were surfing the waves back to the shore on the Falkland Islands. Svensson, the photographer who captured this moment, added that the adorable aquatic birds looked happy each time they leaped through the water.

This young springbok is snapped in midair while leaping at the Kgalagadi Transfrontier Park, South Africa. With all ears and legs stretched outward, studies suggest it is their way of showing strength to ward off predators and attracting mates. Their unique jump is also attributed to their feelings of excitement.

Raccoons move home frequently, so locating to an area with many potential dens is the key to tracing them. Biskaborn says, “I stumbled across this family and immediately worked on leveling the camera with the hole to prevent an upward angle. When the camera and tripod were ready, the baby raccoons were extremely curious, sticking their heads out for a closer look.”

“A Yellow Bittern was trying very hard to get into a comfortable hunting position,” said Wong. “I got this shot when it was between two stalks of lotus flowers.”

“Terry the Turtle flipping the bird” by Mark Fitzpatrick

Bringing home the bacon that year was this underwater shot featuring a turtle on the Great Barrier Reef, Australia. Fitzpatrick, who captured the photo, said that he was swimming with the creature when it suddenly flipped the bird on him.

“Almost time to get up” by Charlie Davidson

Pictured in this Land Award winning photo is a raccoon seemingly just woken up and doing some stretching. Davidson shared that the tree is a usual hangout place for raccoons, which stays for a night or even a month long.

Mayes said he captured this shot while taking photos of a group of Pied starlings perched in a tree at the Rietvlei Nature Reserve, South Africa. He thought this picture perfectly summed up his mood on most Monday mornings.

Captured in Vwaza Game Reserve, Malawi, this image depicts a seemingly ill-tempered baby hippo trying to get his mother’s attention. Sadly, it appears though that he wasn’t getting any.

“Houston – we’ve got a problem!” by Txema Garcia

Taken in Pantanal, Brazil, this image shows an astonished fish being trapped in the beak of an Amazon Kingfisher bird. It’s quite the capture of a true nature moment!

Pictured in this photo are two Western Grey Kangaroos in Perth, Australia. Scaddan captions, “One missed the other one in kicking the stomach.”

“Bald Eagle Gets A Surprise” by Arthur Trevino

Calling it a real David and Goliath story, Trevino showcases how the prairie dog bravely escaped the hunting bald eagle. He wrote that it jumped towards the predatory bird and startled it long enough to escape to a nearby burrow.

“Hide and Seek” by Tim Hearn

Photographer Hearn shares, “I was lined up to take a profile picture of his wings and body, but quite sensibly the damsel reacted to the human with the camera by putting the Marsh grass stem between me and it.” He took the shot anyway, and what came after is an unexpectedly hilarious Air Award winning picture of the damselfly looking like one of the muppets.

Winning the People’s Choice Awards that year was this image of an adorable squirrel taken in Hungary. Kranitz writes, “It’s like he was just singing to me!”

“I’ve got you this time!” by Olin Rogers

Captured in Hwange National Park, Zimbabwe, these African lion cubs looked like brothers that were inseparable. In fact, the other one went as far as stalking in this Junior Category Winning photo.

Gilardini took home the Amazing Internet Portfolio Award in this series of pictures of a bear she titled, Deadly Fart. She captions, “A brown bear is lifting its leg to smell after a fart.. then collapses.”

Thiemenn spotted this oddly-looking parrot fish in El Hierro, Canary Islands. He saw that it had a crooked mouth, looking like it was smiling. After minutes of several attempts, he successfully captured this fish’s silly shot.

Reminiscent of a scene from The Gruffalo story, a little shrew appeared to be negotiating with a fox cub. Fishaimer writes “it seemed as if they were having a conversation, and he is asking the fox “Please don’t kill me.””

According to Scheeff, Atlantic Puffins are amazing flyers and they have superb fishing skills. Evidently, she captured it too well, only with a bit of a humor when the second Puffin looked like asking some of the catch.

“I had to stay late at work” by Luis Burgueño

Sochman caught this moment in 2020 where the birds used a foot to clean each other’s beak. In the luckiest of timing though, he photographed this relevant reminder for us to social distance.

Lloyd-Jones was only hoping that a Kingfisher would land on the No Fishing sign. Thus, when it landed there with a catch, you could only imagine her ultimate delight. She thought, “it appeared to be mocking the person who erected the sign!”

Taken in Galapagos Islands, Hollis wrote, “We were surprised to see that Sea Lions actively practice Yoga.” She added, “Guess they need to get their Zen as well,” and we couldn’t agree more.

“Fun For All Ages” by Thomas Vijayan

“In 2014, I had made 15 trips to India in search of a perfect frame out of these trips,” said Vijayan. We knew his travels finally paid off as he was able to capture this heartwarming image of a playful monkey with its family.

“The Race” by Yevhen Samuchenko

Taken from a town in Hampi, India, a bicycle parking was suddenly flocked by langurs. Scared to frighten them away, Samuchenko first took their photos from afar. Later, when he attempted to get closer to the langurs, he was surprised they only continued playing with bicycles.

“Grab life by the…” by Sarah Skinner

This little lion cub is most definitely feistier than Simba from The Lion King. After all, how can you not laugh at this action shot?

Talk about how a picture can tell a thousand words, this photograph by Vlado-Pirsa sure is telling a story, but it’s hard to tell what might have started the argument these two birds are currently in.

“Oh My!” by Harry Walker

Gasp! This photograph is just too cute. It won the Affinity Photo People’s Choice Award, likely for just how adorable it is.

What would this portfolio compilation be with just one or two standalone photos? Likely, the storyline wouldn’t hit the same. Our personal favorite is “The Wedding Ceremony” because who can resist animal marriage?

“Warning! Territory Marking, follow at your own risk.” by Tilakraj Nagaraj

We can’t tell if the little bird is happy to cool off or utterly disgusted by this rhino’s spray. Either way, we can definitely see how this photograph caught the attention of the Comedy Wildlife Photography Awards.

Answering the question, of “Who would like a peanut?”, this squirrel is shouting, “Me!” We think this photograph is quite the capture of a hilarious nature moment in the forest.

Squirrels must be pretty funny because here we have yet another capture of a squirrel caught in action. What could he be wishing for? Perhaps to remember where he buried that acorn?

Captured in action here is quite the chest bump! Though most of the time only football players chest bump to celebrate a game victory, it turns out, animals can do the same.

Plot twist: the deer in this photo is actually camouflaged. Maybe he’s run into too many hunters throughout his life. Regardless, he might want to try to hide his antlers better!

“Laid Back” by Tom Mangelsen

If you look closely, you can see this little monkey flexing his arms to hold his head while he rests. We can’t decide if his calm demeanor or his big ears are cuter.

Photographer Lorenz said she had many opportunities to watch monkeys interacting with each other during her Borneo trip. You can tell they were ample enough to capture these Pig-Tailed Macaques doing some “monkey business.”

Is it a waltz or is it a fight? We can’t tell whether these two foxes are fighting or dancing, but either way, it’s a pretty funny photo, and we’re glad photographer Alastair Marsh captured it for us to enjoy.

Outside of cartoons, it’s highly unlikely anyone has ever seen an animal dance. Well, it turns out, it’s possible, as this photo shows. We wonder what made this little guy so happy he had to break out in dance!

This penguin probably thought he was hiding from all the penguins around him, which might be true. He could not, however, quite hide from photographer Eric Keller, who captured him in this most embarrassing moment.

This penguin clearly could not resist the waves, as he slides into shore. We think it’s particularly cute how he has his arms spread out for balance, just like a human surfer would do!