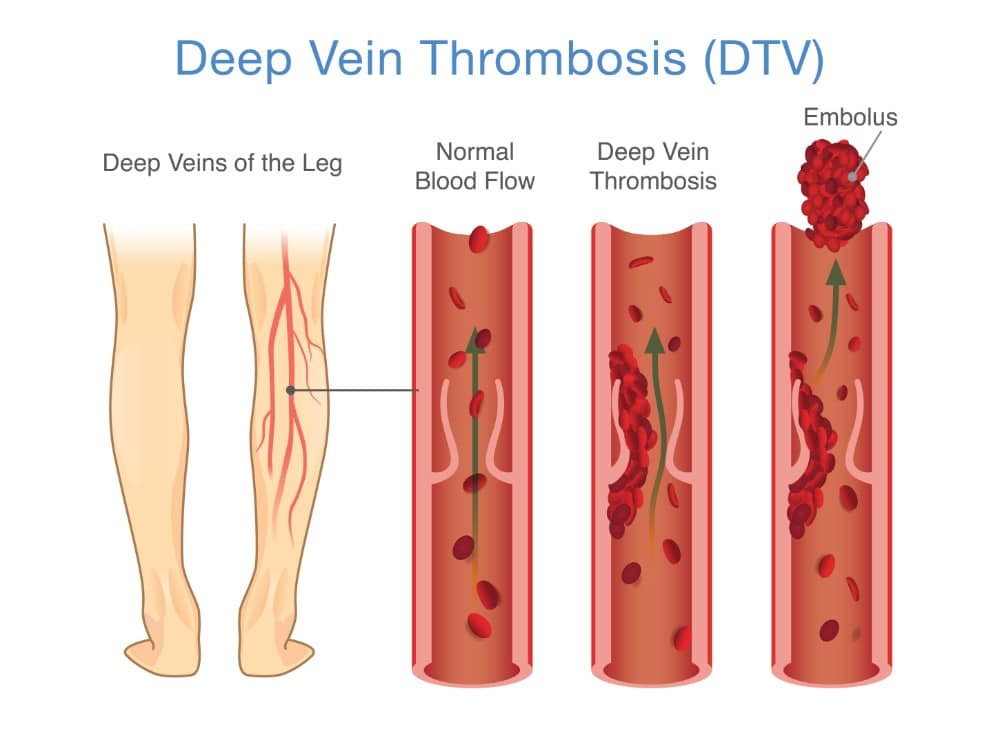 Did you know that approximately 900,000 people in the US are affected by DVT every year? The death toll of deep vein thrombosis patients ranges from 60,000 to 100,100 yearly in the US. Besides, statistics show that 10-30% of affected people die within a month after getting diagnosed with DVT.

Considering how serious DVT is, it’s absolutely essential to know the causes and risk factors for this condition.

Complications of this condition include the following.

The condition is caused by clots from deep veins that travel to the lungs. Pulmonary embolism could permanently damage the lungs or other vital organs. In some cases, PE can be fatal.

Deep vein thrombosis is a serious condition. However, DVT is treatable as well as preventable. When discovered early, the condition is cured with lifestyle changes and blood thinners.

Causes and risk factors for this condition include…

Inherited disorders are passed through genes. When someone under the age of forty develops DVT, the cause could be found in their genetic composition. Nearly 50% of young DVT patients have close family members who have suffered the same condition.

Specific genes and inherited abnormalities that may increase the risk of DVT include the following.

Lacking sufficient protein C is a gene abnormality that affects nearly 0.2% of all DVT patients. This deficiency increases risk of blood clotting.

This insufficiency leads to abnormal interactions of blood molecules and may lead to blood clotting. A deficiency of protein S is present in 1-5 % of DVT conditions.

Since antithrombin III proteins control coagulation, insufficiency of these proteins can result in coagulation problems, which increases risk of blood clotting. 4% of Patients suffering from DVT have developed the problem from lack of antithrombin.

Fortunately, this condition may be controlled by anticoagulation medication.

Approximately 3% of the global population has this gene mutation. Factor V leiden impedes the anticoagulation systems of the body, causing blood clotting.

Of course, sometimes trauma—not genetics—can increase the odds of DVT…

Vein injuries can arise from any number of activities, including medical and surgical procedures.

When veins are injured, they may end up forming clots.

However, in some cases, clots could occur even without physical vein injuries…

It’s important to remember that blood clot risks from birth control pills are low. Out of 100, only one person is likely to develop the condition. However, for women with DVT history, the likelihood of developing this condition increases.

Transdermal contraceptives, or patches, have higher risks of DVT. Why? Because the estrogen rate in the patches is 60% more than the pills.

The following risk factor for DVT can’t be avoided…

Age increases not just the likelihood of DVT developing, but also increases the odds that DVT will be more severe.

Immobilization is the main DVT risk in older people. Namely, there are various reasons people become more sedentary as the age, like chronic conditions. This sedentary lifestyle increases risk of DVT.

People who have a body mass index of 30 and above have higher chances of developing DVT compared to others with lower weights.

There are a few reasons why obesity may increase DVT risk.

Obesity also puts one at a high risk of diabetes, which also increases the chances of getting DVT.

Pregnancy alters many metabolic processes, which can increase risk of blood clotting.

Hormonal changes during pregnancy can decrease levels of anticlotting proteins. With fewer of these proteins, the odds of clotting increase. But that’s not all. The enlarging uterus also increases the risk of DVT since it increases pressure on the lower body.

Symptoms of DVT During Pregnancy

The most common symptoms of DVT are swelling, heavy pains, and extreme tenderness in leg. Nearly 90% of the pregnancy DVT cases occur on the left leg.

Other DVT symptoms include:

Yearly, 300 million people take long-distance flights (five hours or more). Blood clots, which cause DVT, are serious risks for long-distance travelers. Note that those who travel by air are not the only ones at risk. Traveling long distances in any way can increase DVT risk.

Blood clots may form in deep veins of the legs when traveling. Why? Because you will be sit still for an extended period of time. The longer you stay immobile, the greater your risks of developing blood clots.

Other serious conditions can also increase the likelihood of DVT…

Several medical conditions can cause DVT, including the following.

Hardening of arteries and increased plaque buildup both greatly increase the risk of DVT (and several other serious complications).

These conditions are obviously quite serious. However, sometimes seemingly minor medical conditions can raise the risk of DVT as well…

IBDs increase DVT risk factors. Inflammatory bowel diseases include conditions like Crohn’s disease or ulcerative colitis, which are characterized by inflammation of the gastrointestinal (GI) tract.

Bed rest escalates the risks of various complications, like:

Bed rest means not to be involved in any activity or exercise. While this immobility is key to reducing aggravating an injury, it also increases risk of blood clotting.

Fortunately, the next cause of DVT is much easier to avoid…

Nearly 7% of DVT patients develop the condition through smoking.

The links between DVT with smoking are undeniable.