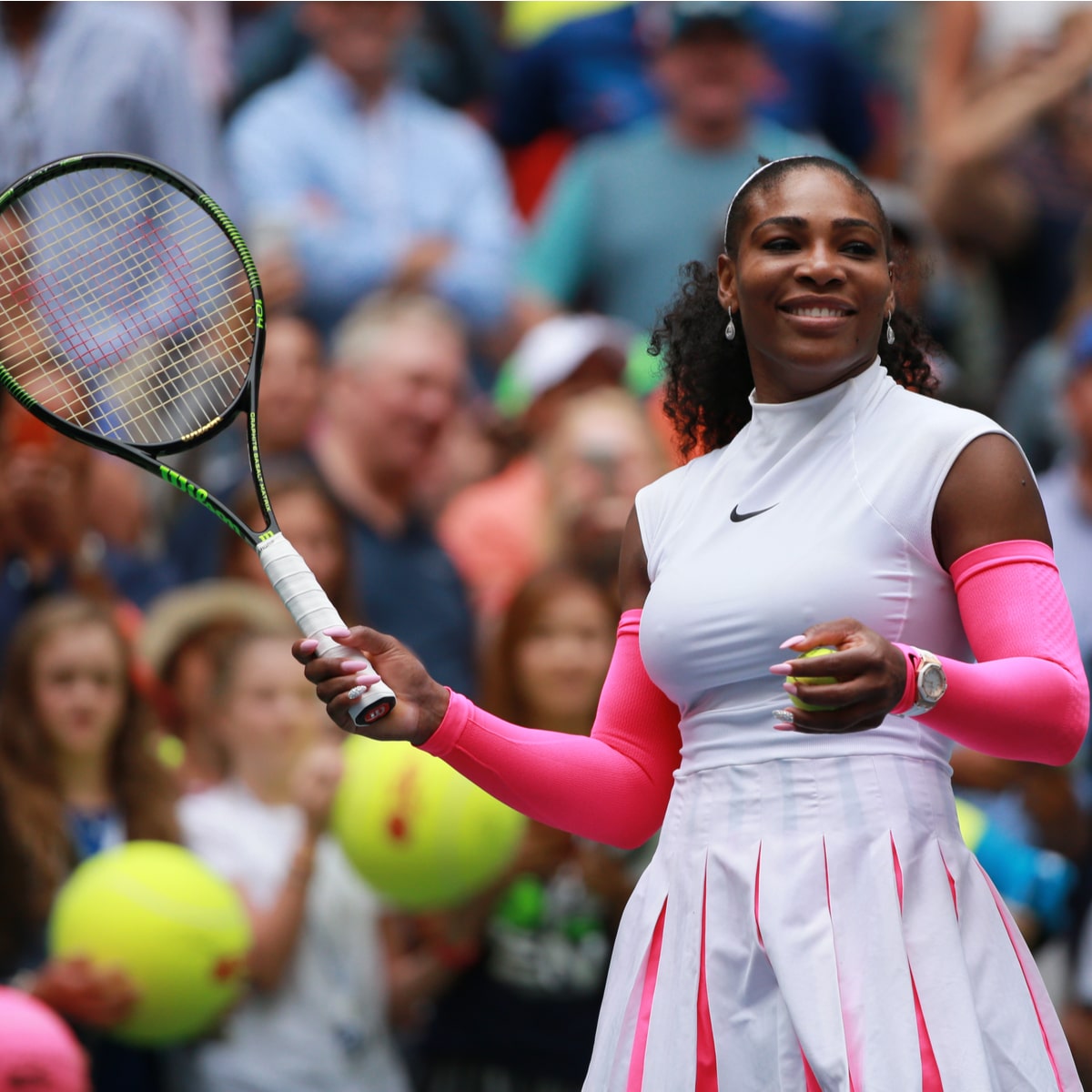 Serena Jameka Williams is a tennis legend. Born on September 26, 1981, she has five full brothers and sisters and seven half-siblings. But besides the basics, there are many fascinating things about this athlete that many of her fans don’t know. Read on to discover 18 facts about Serena Williams that you probably didn’t know.

1. She Is A Native of Saginaw, Michigan

Serena was born and lived the first few years of her life in Michigan. Her parents, Oracene Price and Richard Williams, already had a full brood when she came along. She was the baby or the youngest of all the children. Though she moved to California at around three years old, she still claims to be a native of “The Great Lake State.”

The family left Michigan for the hope and possibility of their youngest daughter having a career in tennis. Though she no longer resides in this state, she is still eligible for awards for athletes from this region because she was born there.

2. She Grew Up in A Violent Neighborhood

Serena was dedicated to tennis and became obsessed with the sport at only four years old. The family relocated from Michigan to California so that the young daughter could get the proper training to be a star. She lived in the Los Angeles suburb of Compton, which is known for being the “bad” side of town.

She recalls dodging gunfire to practice tennis near her home. The neighborhood was rough, and the neighbors weren’t welcoming of their African American family. In many interviews, she recalls her humble upbringings and the poverty that she endured during those times. Her mother was a nurse, and her father ran a private security firm, which did little to pay for such a large family.

3. Tennis Was Her Father’s Dream

Her father, Richard Williams, is the one that had the dream of his daughters being tennis celebrities. He was an avid watcher of television tennis and was determined that at least one of his children would make it big. He thought his two youngest daughters showed real promise.

Williams told his wife he wanted to have children to make them tennis stars. He put tennis rackets in their hands as soon as they could hold them. Thankfully, both Serena and Venus took to the sport and made their dad proud. However, his demanding ways weren’t always easy for the girls to handle, especially since he was living his dreams through them.

4. Her First Tennis Competitions Was Entered at Age 4

While most little girls are playing with Barbie dolls and other toys, Serena was in tennis tournaments. At four and a half, she was the youngest person ever to enter a competition. Her father stated that from 4-9 nine years of age, she won 46 of the 49 tournaments she entered. She became number one in California’s under 12 ranking, which is not an easy feat. By this time, Serena and her sister both had attracted much attention from the world.

Not only did the neighborhood she lived in hold prejudice among African Americans, but she had problems entering the tennis world because it was a Caucasian and European-dominated sport. People weren’t originally receptive to her or her sister. They had to use their skills to prove their rightful place on the court.

Their hard work paid off. Before they were teenagers, they had product endorsement deals, numerous newspaper articles written about them, and even invitations to attend some prestigious tennis camps. They showed the world that their color didn’t matter; it was all about their talent, which was exceptional.

6. Her Father Caused Great Upheaval in Her Career

Entering junior competitions is the typical path to fame for young tennis players. However, Serena’s growth took place by being separated from her colleagues. Her father said that he wanted to avoid exposing his daughter to cutthroat demands, as well as the undercurrent of racial resentment.

His tactics were considered vicious by some. Many experts criticized his coaching style, and it brought a great deal of attention to both Serena and Venus. He pushed the girls to do things “his” way, and it didn’t matter what the media or anyone in the association thought.

7. She Lost Her First Tournament in The Professional League

The first professional match that Serena played in was held in Moscow, Russia in 1997. Playing against a highly ranked player was hard, and she was eliminated in the first round. Venus was slowly climbing in the ranks, but critics didn’t believe that Serena had the same skill level.

Her second tournament fared better. She played in Chicago against Mary Pierce, who was the seventh top-rated tennis player in the world. Serena won. She moved from 304 in the rankings up to 102. Newspaper articles showed her as the WTA rising star. She finished as number 99 in the 1997 season.

8. She Trained at An Elite School In Florida

When Serena and her sister made the big leagues, her father knew they needed more help than what he could give. They had many endorsements coming in that gave them extra money to work with, so he sent them to the Florida Tennis Academy. Their coach was Ric Macci, who was known for helping tennis greats like Jennifer Capriati and Mary Pierce. It was a bold move sending them across the country, but he also wanted to remove them from the racial tension near their home.

Because Serena and Venus’s tennis career took precedence over everything in their life, their parents decided to have them home schooled. By doing their studies at home, they could meet the rigorous demands of their schedule and complete their academics. Their mother was the one that primarily did the teaching, but her father also helped from time to time.

10. Her Sister Was Shot Near Her Childhood Home in Compton

To say that the Williams family lived in a rough neighborhood was an understatement. In September of 2003, her half-sister Yetunde Price was driving down the road in Compton, when she got caught in the crossfire of two gangs and was shot and killed. A police investigation only turned up one suspect, but no one was ever arrested for her murder. Her sister was a registered nurse and served as a personal assistant to Serena when she was on the road for tennis competitions. She left behind three children, who were co-raised by Serena and Venus Williams.

11. She is a Devout Jehovah’s Witness

Serena was raised as a Jehovah’s Witness. She is often seen praying or reading her Bible before or after a competition. Though there were 12 siblings in all, only Serena and her mother are still practicing the faith. There are no celebrations of birthdays, no Christmas holiday, no Easter Bunny, and no anniversaries. Her religion gives no credence to any holidays or monumental dates in a person’s life. Some say that religion was one of the aspects that led to her parent’s divorce, though there were many other factors.

12. Serena is an Avid Animal Lover

Who doesn’t love animals? Serena has stated that her two favorite types are tigers and dogs. She has vocalized how her dream is to own and raise tiger cubs. While that may not be possible for her now, she does love her two dogs. Her youngest, a Yorkshire Terrier named Chip, seems to be her favorite. He often travels with her and is glued to her side most of the day. She’s so in love with her dog that her Instagram page is loaded with his pictures.

13. She Met Her Husband in Rome, Italy

The famous athlete has traveled all around the world and back again. However, she states that her favorite place to visit is Rome, Italy. It was in this very city that she met her husband in 2015, Alex Ohanian. They were engaged in December of 2016, and then they married in November of 2017. The couple has one child that was born on September 1, 2019. Her name is Alexis Olympia Ohanian Jr, which they shorten to Alexis.

14. She Runs the Serena Williams Foundation

In 2008, Serena decided to help other children who are affected by poverty and racial discrimination. She opened her wallet and her heart to children across this country, specifically those touched by violent crimes. The fund was created to encourage fairness; via schooling, gender, ethnicity, disability, or whatever inhibits a child from reaching their goals and dreams. Serena wants every kid to live their best possible life.

15. Holds Record for Being #1 The Longest

During her career, Serena certainly has received a great deal of publicity. Part of the reason is that she was no. 1 for 253 weeks, which is an astounding feat. She held this spot for a consecutive 186 weeks, as does competitor Stephanie Graf. She made more than $84 million in prize money during her tennis career, which ended in 2003 due to medical problems. She was active from 1995-2003, which is eight years. She loves tennis, but she has never seen herself as just a tennis player. She has many interests, including acting and being a the best wife and mother she could be.

It’s kind of hard not to let notoriety go to your head, but Serena remains humble. She was only 20 years old when she received the ranking of number 1 in the world of tennis. She’s won four gold medals, which is no small feat. Though she has certainly made a name for herself in the tennis circuit, she also loves gymnastics. If she didn’t become a tennis pro, her next choice was to be a gymnast. She has certainly demonstrated that she is limber and agile enough to do gymnastics too.

17. Acting Is Her Other Passion

These days, you might catch Serena on a music video, movie, or television show. She’s worked with Alicia Keys and Kanye West, as well as started in many hit shows. Some of her performances include Law & Order: Special Victims Unit, America’s Next Top Model, Punked, Keeping Up with the Kardashians, Ocean’s 8, My Wife and Kids, Street Time, E.R., and many more. She’s also done the movie Hair Show and one about her life called Serena.

18. She Lives in Jupiter, Florida Close to Venus Williams

The sisters have nearly been inseparable for most of their lives. They even lived near each other in Palm Beach for more than ten years. However, after Serena got married, she moved into a mansion in a gated Jupiter community. The move occurred in December of 2013. Though still close, the sisters now reside 16 miles apart.

Did you learn any new or interesting facts about the famous tennis star? She is a fascinating individual that never ceases to amaze. Her humanitarian efforts and desire to give back does not go unnoticed. This year, she started the incredible journey of her life, being a mom.