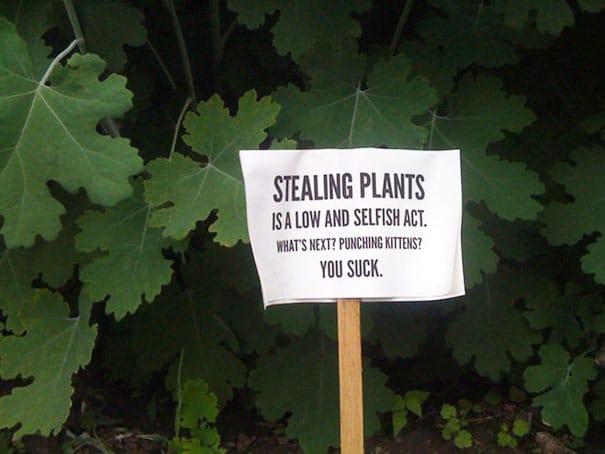 The problem with neighbors is that you don’t get to choose them. They’re kind of like family that way. Except with family, you’re encouraged to talk through your problems and love one another. Neighbors can simply leave passive-aggressive notes on one another’s property and then run away, opening the door for epic stories of revenge. Like these!

If you live next door to Edward Scissorbutt, karaoke stars who sing long into the night, or gardeners who grow pink flamingos like weeds, you’ll enjoy the stories of these terrible neighbors and the passive-aggressive notes they’ve inspired!

No Butts About It

Sometimes it’s just easier to blame things on the cat. Stolen food? Cat. Missing sock? Cat. The smell of someone smoking out back when everyone in the house has supposedly already quit? Cat.

But also, who throws their cigarette butts into their neighbors’ yard? That’s just gross!

What a sweet neighbor. She went out and bought poop bags, and then gathered all the poop she could find and left it on her neighbors’ front porch. She even ended her note with an exclamation point made with a heart. Who could possibly be sweeter?

This neighbor skipped right past passive-aggressive and jumped into aggressive with both feet. We wouldn’t want to be there when someone finds this note and knocks on the door at #301!

These annoyed neighbors could have simply called the cops. Instead, they pulled out their paper and markers and really went to town making their point. We applaud their attention to detail and the two-toned text which adds clarity to their note. Well done!

Leaving a sign is passive-aggressive. Accusing someone of being the kind of person who could resort to punching kittens is just plain aggressive. Also, this sign lacks the creative flair some of the previous signs in this list present. We think these neighbors could do better next time.

Who Let the Cats Out?

It’s so upsetting to hear people fighting! Especially at 2 am. We think this community did the right thing by addressing the issue and doing so in a note that ended with a heart. The crudely rendered hearts make everything okay . . . and they definitely ratchet up the passive in passive-aggressive.

A Flock of Revenge

While we don’t understand what caused the owner of this yard to call the cops on the owner of the other yard, we do understand a good ol’ fashion show of passive aggression when we see it. While we can’t condone pink yard flamingos for any reason, if you’re going to buy one–or 20–you might as well use them to be over-dramatic like this guy. (We have to admit, this is pretty funny)!

This sign sounds so ominous. It leaves the pigeons’ actions to the imagination. “They do things.” What things? WHAT THINGS? Are we in danger?

We had to give this one a 10 for passive aggression because it took a lot of time AND it was done with artistry. Quiet aggression. Whoever sculpted this gem played the long game of neighborly anger and while we can’t condone rudeness we do believe in the power of art to communicate what is in the soul. Well done, Edward Scissorbutt. Well done.