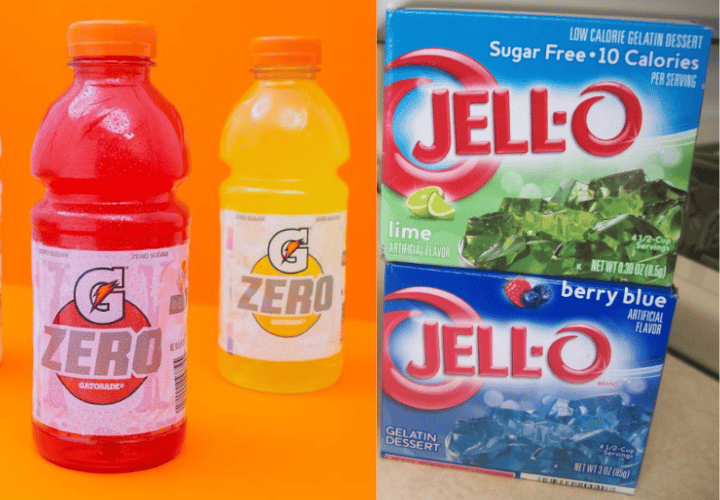 It’s no secret that the US has its fair share of packaged and preserved foods. While some things are fine as long as they’re in moderation, several US snacks aren’t eaten overseas. In fact, there are a number of tasty American treats that are actually banned in various countries due to their controversial ingredients.

From snacks colored with artificial dyes to potentially toxic preservatives in your chicken, here are just a few foods we eat in the United States that are outlawed elsewhere.

Sodas are not healthy, to begin with, and adding brominated vegetable oil to the mix makes them even worse. It doesn’t help when you realize that most American sodas contain this toxic ingredient which causes memory loss, and skin and nerve problems in some people.

Our beloved Mountain Dew soda contains brominated vegetable oil, earning them a ban in Japan and most European countries.

Little Debbie Swiss Rolls are a delight to our taste buds but they may not be so healthy after all. They contain food dyes that cause adverse effects in infants and children.

Food products containing these food additives are banned in Norway and Austria. While they are considered safe for adults in Europe, they are not to be used in food products for kids.

While consumers happily munch on this candy, they don’t know they are eating the yellow 5, yellow 6 and red 40 food dyes.

These food dyes are bad news for infants and children, therefore they are banned in Norway and Austria.

Generally, food products containing food dyes are considered safe to be consumed in the United States. But most countries including European countries, Norway, and Austria don’t think so.

Coffee-mate looks like the best option for coffee lovers especially those who are lactose intolerant.

Trans fats are linked to heart diseases and products containing trans fats (including Coffee-mate) were recently banned in the United States. But few remain in the food supply chain.

They are also banned in Switzerland, Austria, Denmark, Iceland, Norway, and many other countries.

Ractopamine is commonly used by farmers in the United States to increase lean muscle growth in their livestock. But this practice is illegal in the European Union, Russia, and China.

You might not feel so lucky next time you are having Lucky Charms cereals for breakfast.

These cereals contain yellow 5,6 and red 40 food dyes. And as we mentioned earlier, these food dyes are restricted in Europe and are illegal in Norway and Austria.

This fruit drink gets its flavor and color from food dyes.

Products containing these food dyes are restricted in Europe and must include warning labels. They are completely illegal in Norway and Austria.

Trans fats are currently banned in America and are restricted in several other countries like Switzerland, Austria, Hungary, Norway, and Denmark.

Chickens in the US are rinsed with antimicrobial chlorine to reduce their risk of spreading food-borne diseases to consumers.

However, this practice is frowned upon in the United Kingdom and European Union because it is an indication of unsanitary farming practices.

The freshness of Wheat Thins crackers is preserved with butylated hydroxytoluene (BHT). BHT is a food preservative when taken in large amounts becomes toxic to the human body.

This food additive is consequently banned in several countries like the United Kingdom and Japan.

Tostitos Salsa Con Queso Dip gets its bright colors from the food dyes yellow 5 and yellow 6.

These food dyes are harmful to children hence their ban in Norway and Austria.

With Kraft Stove Top Stuffing, you won’t spend all day preparing stuffing. However, this food mix contains BHT and BHA preservatives which are linked to cancer and can impair blood clotting.

These food preservatives are banned in the United Kingdom, Japan and several European countries, for that reason.

This breakfast sausage includes BHT as a preservative and flavor enhancer.

BHT is presumed to be a carcinogen hence its ban in the European Union and Japan.

Doritos Light was introduced as a healthier choice for Doritos chip lovers since it contains fewer calories than the rest of the Doritos flavors. While olestra the fat substitute used in Doritos Light is not toxic to humans, it causes occasional abdominal cramping and loose stool in some.  It is however banned in Canada and most countries in Europe.

You can never go wrong making pies with Pillsbury Pie Crust Mix. Alas, even our beloved pie mix is banned in Japan, the United Kingdom, and some European countries. Because it contains BHA and BHT, two suspected carcinogens.

Unfortunately, most baked pastries in the US, including bread, contain this harmful ingredient. Potassium bromate is banned in several countries including Peru, Canada, and the United Kingdom.

On the surface, Raspberry Jell-O looks like a healthy dessert owing to the fact it is low in calories and is free from artificial sweeteners. But on a closer look, it is not so. This dessert gets its characteristic colors from food dyes that are harmful to children.

This is a popular sports drink that helps replenish an athlete’s energy after intense physical activity. But this energy-replenishing drink contains an insane amount of sugar and food dyes which may lead to unhealthy weight gain and health conditions like type 2 diabetes.

The yellow 5 and yellow 6 food dyes used in Gatorade are banned in foods for children in Europe. They are completely banned in Norway and Austria.