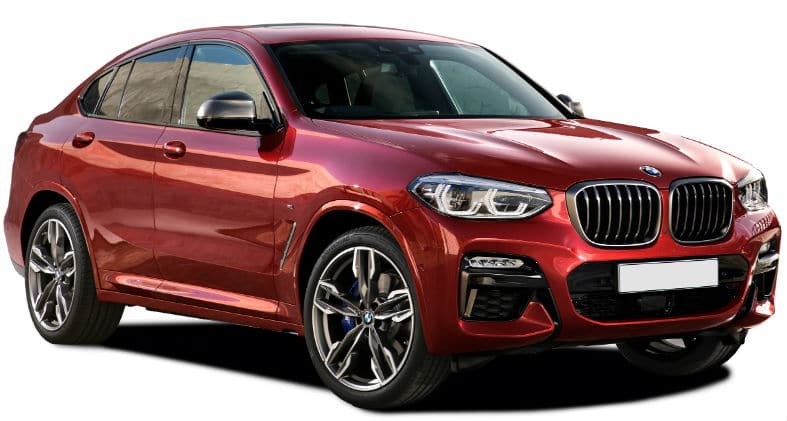 With a top speed of over 155 mph and the ability to go from 0-60 in less than 5 seconds, the 2019 BMW X4 rivals the world’s best for performance. This year, it’s apparent that BMW used its 40 years of experience building quality engines and vehicles to create a masterpiece. While the X4 is busy tearing up the roads and handling corners at lighting speeds, passengers ride in comfort and luxury in its comfortable, spacious, and well-equipped cabin. A longer wheelbase lowers the sedan’s center of gravity and frees up more space inside. The exterior of the X4 is sculpted and perfected for a sleeker, more aerodynamic, and more head-turning design. Inside and out, this car is a work of art.

The new X4 boosts positive upgrades, including style and design changes inside and out. This year’s model sports a sloped roof line and a narrower, more aerodynamic rear when compared to previous versions. With this change, the X4 appears more like a coupe than a crossover SUV. The longer wheelbase improves the vehicle’s steering and handling, and it also frees up extra cargo storage space.

Looking at the 2019 X4 from the front, it’s hard to take eyes off the chrome double-kidney front grille, which is framed by elegant, softly curved LED lights. Additional exterior features distinguish the higher trim levels. With the M40i, for instance, customers will get a sportier exhaust system, sporty brakes, and 19-inch wheels.

The interior of this model boasts the most sophisticated, tech-savvy, and luxurious cabin yet. BMW’s latest industry-leading technology makes its way into the X4 too, which sports an intuitive 10.25-inch touchscreen with navigation and Apple CarPlay. For safety, drivers can choose to get the head-up display version instead. This technology projects information from the infotainment system into the driver’s line of sight so that there’s no need to take eyes off the road.

For even safer and easier device control, a feature called Gesture Control is available. It lets drivers manage the audio system and devices with the wave of a handle. Other optional features in the X4 include a wireless charging station and a Wi-Fi hotspot that supports three devices at once. Ventilated front seats, premium leather seating surfaces, and a top-notch Harmon Kardon audio system are other optional features. In addition to the high-end features throughout, chrome accents around the interior add to its luxurious image.

Power and performance go hand-in-hand with the 2019 X4. Even the base engine has a power output of 248 hp. This four-cylinder engine can generate up to 258 lb-ft of torque at 1,450 rpm. A quick, responsive drive is accomplished with the turbo-charged power behind the engine. The engine powering the M40i, which is the higher trim level, gets even better. This six-cylinder engine generates a maximum of 355 hp. This means that it features a performance improvement of nearly 20 percent over the base engine! This engine’s torque production is roughly 365 lb-ft. Both engines are connected to an eight-speed automatic transmission that shifts gears smoothly and seamlessly.

While its luxury and performance amenities are impressive, the 2019 X4 also has a lot to offer in the safety department. The latest X4’s safety technology starts from the ground up. Engineers redesigned the all-wheel drive system this year to help it monitor, and instantly respond to, changing road conditions. If the intuitive system detects the wheels slipping, it sends power to them to improve traction and control. In the cabin, the 2019 X4 is equipped with current safety technology. This includes lane-keep assist, forward collision detection and avoidance, and adaptive LED headlights. A series of additional safety features, available in the Driving Assistance package, include more sophisticated forward collision warning, rear cross-traffic alert, and adaptive cruise control with a stop-go function.

So, how much does this incredible 2019 model cost? At a base price, the xDrive30i, which is the entry-level model, starts at $50,450. The X4 M40i starts at a base price of $60,450. This could roughly break down to $599 per month for the base trim and $729 per month for the M40i. Either model can be upgraded for an additional price. Adding the Executive Tier package to the base model, for example, ups its asking price to $56,300. This package adds ambient interior lighting, automatic high beams, active parking-distance control, a dynamic digital display, and a camera with surround view. Adding the top-level Executive Package to the higher trim level adds on $2,850 to the base price. The package includes a dynamic instrument cluster that’s fully digital, active parking distance control, and parking assist plus.

No matter which trim level of the 2019 X4, it’s impossible to make a poor choice. Redesigned inside and out, and more tech-savvy and powerful than before, this is one BMW car-enthusiasts won’t want to miss. With plenty of add-on features and packages, the freedom for a custom finish is fully in the hands of the consumer.