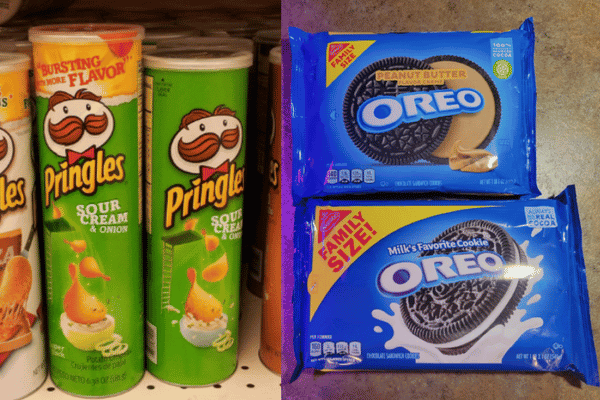 It’s not just you — that cereal box was bigger last month. In times like these, a phenomenon known as shrinkflation is common. Shrinkflation occurs when companies make their products smaller while keeping prices the same (or even raising them). Though meant to offset increasing costs of labor and materials without directly raising prices, shrinkflation hurts the consumer. You’re paying more for less, and quality often suffers just as much as quantity. Portions shrink, packaging gets smaller and less durable, and quality ingredients are replaced with cheap fillers.

From diapers and detergent to your favorite candy bar, here are just a few examples of shrinkflation happening all around us.

The people at Frito-Lay could just raise the price of a bag of Doritos by say, 50 cents or so. But no, instead they decided to give their customers 25 fewer grams of Doritos. That’s basically taking away an entire serving’s worth of chips, yet still charging the same amount. What a rip-off!

Pop-Tarts icing is spread thinner than ever before…

This Wild Berry Pop-Tart looks like it’s seen some better days. In fact, Pop-Tart icing is spread so thin anymore that you can actually see the holes! While cutting back on the amount of icing per Pop-Tart saves the company at least a few cents on each pastry, it’d be nice if they could at least update the artwork on their boxes to reflect this. Thicker icing that almost coats the pastry edges is now a sad story from the past.

Chunky, 32 oz Gatorade bottles are being phased out everywhere and replaced with the slimmer 28 oz version. While the people at Gatorade (owned by PepsiCo) claim that the slimmer bottle is better for gripping (and while it really is) we all know the truth. The design change was less about ergonomics and more about giving customers 4 fewer ounces of Gatorade while charging the same price.

Don’t have as much soap? Don’t get dirty as often!

Shrinkflation strikes again! On the left is a bar of Dove soap purchased in 2020. On the right is the exact same bar of Dove soap, except it was purchased in 2021 and it weighs 0.25 fewer ounces. Regular users of the soap also claim that the soap’s Dove logo is now cut deeper into the bar than ever before, another way to subtly shave away at the total product weight.

A serving on your average box of pasta is usually around 55-60 grams. This means that 1 pound of pasta (454 grams) can usually be divided into 8 equal servings. With Barilla Spaghetti decreasing the weight of their classic blue box from 454 grams to 410 grams, people will either be getting 7 servings instead of 8, or a bit less noodles on each bowl/plate.

Shrinkflation tip #63: buy items based on the ounces, not on the box size

While this big box of Valentine’s Day chocolates probably looked impressive on the outside, the inner contents leave quite a bit to be desired (like 3-5 more pieces of chocolate!). The gaping, awkward spacing of the chocolate box is far from efficient, meaning you get less chocolate and more plastic. Yuck!

Someone isn’t very good at math over at the WD-40 headquarters. They say that the can on the right has 25 mL of extra product, but that’s 25 mL extra compared to what? A smaller can? The can on the left, while appearing to be the same size, clearly has more product, so we’ve learned our shrinkflation lesson: never trust a bright red banner!

On the left is a box of Rice Krispies bought in December of 2020, while on the right is a box bought in June of 2022. We know that statistically, American families have been getting slightly smaller in recent years, but that doesn’t mean companies should automatically take away 6 oz of product from the family-sized versions of their products.

Also notice that while the newer box has 25% more cleaning power (probably due to a formula change) in this case, it isn’t possible to stretch the product further with less, as the detergent comes in individual packs or pods.

Didn’t Reese’s use to cover the palm of your hand?

We might be exaggerating a little bit, but there’s no way that this is the size of a regular Reese’s Peanut Butter Cup! Give it a few more years, and the mini, stackable size is going to become the standard size, with the standard size becoming a “big” cup.

Maybe one day, Reese’s with return to being more than barely an inch and a half across. Until then, we’ll be crying in a corner over our disappointment and broken dreams.

One is a half gallon. The other is an imposter.

At first glance, these two cartons of milk both appear to be standard, half-gallon containers. However, when you look a little closer, you can clearly see that the red carton on the left isn’t even labeled as a half gallon, because it just doesn’t weigh enough. Even though the difference only comes out to being a couple of ounces, it still seems like some pretty deceptive packaging.

Here we have a product just as it’s being phased out from its old packing to its new one. As these boxes of old cotton swabs are replaced with the new ones in stock, you can clearly see the manufacturers have decreased the package count from 225 swabs to 200. That’s a little over 10% decrease, yet the pricing remained the same.

Is this pudding cup half empty or half full?

Oh come on now, that’s just a waste of plastic! This Cadbury pudding cup looks like it’s only 2/3’s or 3/4’s full. Of course, pudding usually isn’t filled to the brim, because opening it would always result in a little bit of pudding flying out. However, there is definitely a happy medium between a pudding cup filled this low and one bursting at the lid. A whole spoonful was probably lost due to this skimpiness.

The new shareable Twix bag is 15 grams short of being perfectly balanced, and the only way to fix it is to put a Twix back in the bag. Knowing how companies view profits, however, they’ll probably just take out another Twix and make the bag an even 10 pieces instead.

This CeraVe PM face moisturizer went from a 89 mL bottle to 59 mL one. The lotions cost the same price and are the exact same formula, and yet you’d be getting a few days, possibly weeks less lotion than what you’d normally pay for.

Either get ready to update your skincare budget, or start practicing making your own! (Honestly though, it’s probably best to just update your budget. Otherwise you could wreck your face’s ph balance and end up at the dermatologist.)

Hats off to Nature Valley, as this change is barely noticeable.

At first, you might only notice the change in packaging of Nature Valley’s sweet & salty nut, dark chocolate, peanut & almond bar. However, once you get past the logo and color changes, you’ll note that this particular bar went from 35 oz to 34 oz, and is now 10 fewer calories. While having less calories makes the granola bars appear slightly healthier, they’re really not. That bars are just fewer calories because the makers are feeding you slightly less food in each one.

These two bottles of Cutter Skinsations bug spray were bought just eight months apart: one in October of 2021, and the other in June of 2022. While sure, new bottle shapes can lead to better grip and storage options on the go, unfortunately, it seems that 98% of the time, a bottle redesign means you’re getting less product, and the company is trying to trick you into thinking you’re getting the same amount or more.

It’s not technically false advertising, but it sure is shady!

Remember when gum came in a 10-pack?

This. This is just stupid. The plastic packaging on this pack of gum now features a small empty tab that’s meant to “make it easier” to pull the pack out of the box. Yeah right. The gum company just wanted to serve one less piece of gum per pack. Plain and simple.

And sadly, once again, because they went from an even number to an odd one (from 10 down to 9), sharing gum just got a lot less fun.

No mac n’ cheese box should be this small…

While yes, we’re all getting older and our bodies are far bigger than our eyes and imaginations were as children, mac n’ cheese boxes have gotten tiny. No, you aren’t a giant in the pasta aisle, you’re just another observant victim of shrinkflation ruining a childhood staple.

It used to be an adult could eat an entire box of mac n’ cheese by themselves and then regret it over the next few days. Now after eating a full box, you’ll probably have room for ice cream in an hour.