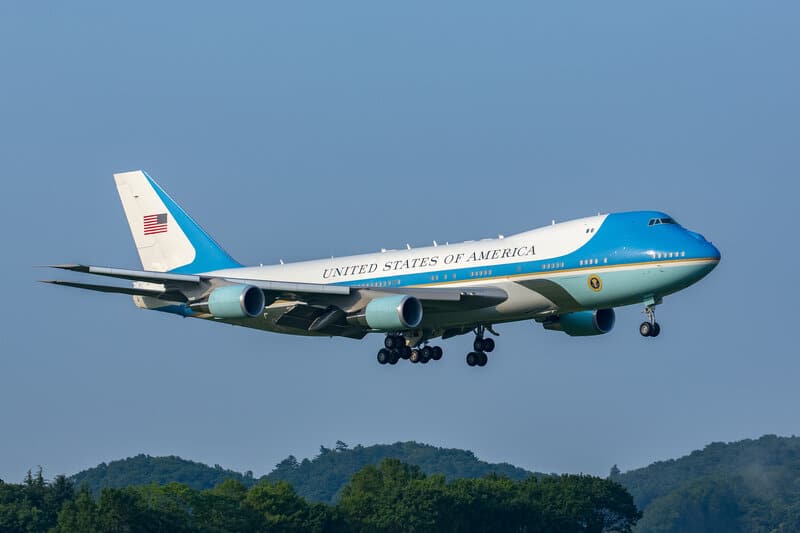 No matter what day or time it is, the President of the United States must always be ready to travel. Fortunately, the modern age has allowed a variety of reliable transportations, including aerial vehicles. This plane, specifically designated to fly the president around the country and the world, is called Air Force One.

Despite its popularity as the official Commander-in-Chief aircraft, Air Force One is a mystery to many people. To learn some of the most fascinating facts about Air Force One, read on!

Air Force One is actually a radio call sign used to refer to the plane transporting the president. Nowadays, the standard practice is to generally use the term for planes specifically flying the president.

A “Name” To Prevent Future Mishaps

Did you know that before becoming the president’s official aircraft call sign, another plane had a similar name? Back in 1953, a commercial plane, Eastern Air Lines Flight 8610 mistakenly entered President Eisenhower’s airspace when he was on board his plane, Air Force 8610. After the incident, the term ‘Air Force One’ was solely used to refer to the aircraft the commander-in-chief travels. This is to avoid similar confusion and prevent future air travel mishaps.

Air Force One Plane Has A Reliever

Ironically, Air Force One is not the only “one.” The military has designated two aircrafts under the call sign, Air Force One. They also serve as the official planes for presidential travel. These two planes have been in service since 1990, and one of them is always ready to fly.

Boeing Made the Current Planes

While several types of planes were previously used as Air Force One, the current operating planes are both highly customized Boeing 747-200 aircraft. Each has four engines and carries the tail codes 28000 and 29000, respectively. The Air Force designation for the aircraft is VC-25A.

Air Force One is a huge, spacious airplane. The fleet boasts 4,000 square feet of floor space and has three floors for diverse activities the president can enjoy. It contains an extensive suite that includes a large office, gym, bathroom (with shower), and conference room.

Air Force One Has 85 Telephones

The president may be flying thousands of feet high above the ground, but is never disconnected. Why? Well, the Air Force One is equipped with 85 phones on board. Not only does it have lines for both classified and unclassified use, but it also has multi-frequency radios and Wi-Fi.

Air Force One Has Two Kitchens

Most of the foods in the plane are prepared in a special, safe kitchen at Joint Base Andrews. They are vacuum-sealed and frozen to maintain freshness, and the cooks or crew just reheats the meals on board.

Ever imagined a medical emergency happening on board? Well, worry not because Air Force One planes have a medical suite that can even function as an operating room. The president and White House staff are also accompanied by a doctor throughout their travel.

Air Force One Can Seat 70 People

Talk about spacious, as Air Force One can seat up to 70 people. It can accommodate the president and his or her team.

A Mobile Command Center Rests Inside

Air Force One has a mobile command center instated inside the aircraft. It contains secured communications technology and advanced electronic equipment, reinforced to repel electromagnetic pulse. In the event that United States is under an attack, the president would be able to respond, even if he’s mid-air.

Whenever the president travels, his bulletproof motorcade is sent ahead of Air Force One through a C-141 Starlifter cargo plane. This way, the president is safely secured while travelling both in the air and on land.

The ‘Doomsday’ Plane Trails After Air Force One

Popularly known as the ‘Doomsday’ plane, the E-B4 Advanced Airborne Command Post always follows Air Force One. Designed at the height of the Cold War to resist a nuclear attack, the aircraft is a nuclear bunker that also serves as a mobile command center.

Air Force One, By Default, Is A Bunker

Though the president has the Doomsday following at all times, Air Force One is already built to withstand any nuclear attacks. As such, it also serves as a bunker in the event of an airborne attack. The body of the aircraft has armor plating, and its windows are also made up of armor-plated glasses.

The Plane Can Stay in The Air Indefinitely

In line with the dramatic refueling scene in Air Force One the movie, the same is true for the actual fleet. Air Force One planes can be refueled mid-air, though the maneuver is only allowed for emergency situations. To do so, a fuel plane would arrive and hover overhead to refuel through a refueling probe on the aircraft’s nose. This enables the president to be in the air indefinitely if there’s an unsafe situation on the ground.

It Can Almost Travel at The Speed Of Sound

Air Force One has a top speed of 600 miles per hour, a close second to the speed of sound, which is around 767 miles per hour. In addition, it can also fly higher than the average plane, with a maximum altitude of 45,100 feet.

Air Force One Never Stays At A Terminal

Ever wondered why every picture of the president coming out of an airplane takes place on a set of stairs? It’s simple. The plane never parks at a terminal in the airport. It stays wherever it has landed so that it can take off immediately as needed.

Air Force One isn’t the only official fleet flying VIPs in the government. There is also Air Force Two, the radio call sign for the plane the vice president uses. Typically, the second chief-of-command flies on a C-32A, a military plane similar to a Boeing 757.

There Is A Helicopter Alternative

Airplanes are not the only aerial fleet the president rides; there are also helicopters. Marine One is used as the radio call sign for the helicopter transporting the president. These Marine One helicopters are equipped with ballistic armor and anti-missile defenses. Moreover, the pilots who fly them are from Marine Helicopter Squadron One and are known as the Nighthawks.

There Will Be New Air Force One Planes

The two Air Force One aircrafts have been in operation since 1990 and are set to be replaced in the next few years. In 2018, Boeing won a $3.9 billion contract to create replacements for the current fleet. The new Air Force One planes should be ready to fly the president by 2024.

In 1933, the Navy purchased a Douglas Dolphin seaplane for the president’s personal use. However, it wasn’t until 1943 when President Franklin Roosevelt traveled through the aircraft to handle an official state business. He flew to meet Winston Churchill and discuss a war strategy in Casablanca, Morocco. His journey took a total of four days, departing from Florida to Carribean, going to Brazil until arriving in Gambia. From there, the plane flew him north toward Morocco.

After his historic flight in 1933, Roosevelt pioneered the Presidential Pilot Office. Also known as the Presidential Airlift Group, it is an official part of the White House Military office and is responsible for maintaining and operating Air Force One.

President John F. Kennedy was the first president to use a jet built specifically for presidents’ travel.

Did you know that the Air Force One we know today is actually Jackie Kennedy’s brainchild? The First Lady had commissioned designer Raymond Loewy to create a new interior for the presidential fleet. Moreover, she oversaw the redesigning of the plane’s blue exterior, Air Force One’s most recognizable feature.

Lyndon Johnson Took The Oath Of Office On Board

Former President Trump’s personal plane reportedly has fancy decorations such as gold-plated seat belts, customized family crests tailored on leather seats, and even a movie theater. However, the official aerial fleet is larger, faster and can fly for longer without refueling.