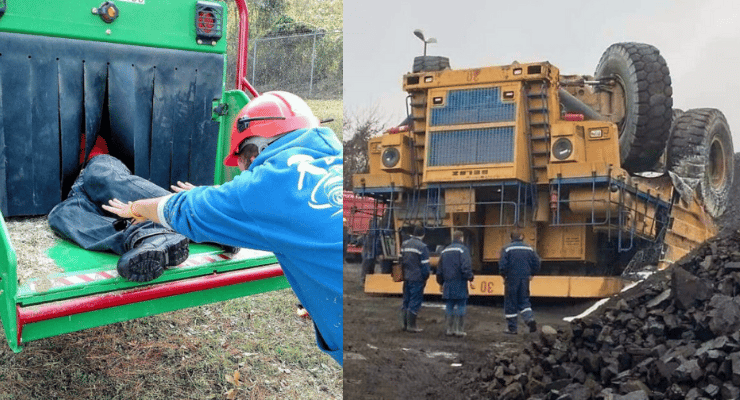 Work can be dangerous, which is why the US Department of Labor created OSHA, the Occupational Safety and Health Administration, to help people stay safe on the job. Unfortunately, sometimes people take shortcuts to get the job done, and these can have dangerous yet comical consequences.

Warning: Dangerous and reckless behavior to follow. Do not attempt.

Looking at things from a new angle

Either this guy’s spatial awareness is on point or he’s a physics genius. That is indeed an interesting way to approach a task at work, though it leaves one important question up in the air: What if the glass breaks?

Well, it’s worth the risk in the name of science!

At work it’s important to know you can count on your co-workers, but these construction workers are taking trust to another level. There are a few work violations and perhaps the worst of them all is wearing slippers at a construction site while working. There are a million other safer ways they could’ve approached this situation, but when the synergy is good, it’s worth the risk.

The stairway to Heaven

This might literally be the stairway to heaven because that’s exactly where he might end up at if he falls. At least there might be a chance his fall will be cushioned by the truck. The fact that he did that and there’s also no one to supervise him, breaks all work safety rules.

This looks more like a Cirque de Soleil audition than a day at work. We can only hope his balance is on point. Another safety violation at work with no supervision. Perhaps the person taking the picture could’ve helped instead. To his benefit he probably go the attention of many circus scouts (if there’s such thing).

That is a quite respectable effort to say the least and that’s a highly skilled employee. But his skills could be used elsewhere like a circus for example. There are many element in this picture that are a perfect recipe for disaster and in this case, getting fired would be a blessing in disguise.

Anybody need some tires?

If you need new tires for your car, don’t worry. But be patient because sooner or later all these tires will fall off. Keep a safe distance (if that’s even possible) and you’ll get your tires. Also, is that a fishing net around the tires? Well, whoever this person is, maybe its time to retire (pun intended).

Why not the orange buckets?

Of all items you can stand on, why a gas tank? We only hope this electrical engineer knows what he’s doing because if there’s even spark of fire, the whole place can blow up. Even the orange buckets in the corner would’ve been a better call (though those aren’t considered that much safer!). He probably lost a lot of clients with this one picture.

This is another great example of how we can always trust our co-workers. They will do anything to complete the task. Luckily, in this situation the construction man in the bottom is wearing a hard hat. He must be hoping his co-worker on top didn’t have a heavy lunch. Next time better use some stairs.

Another day at the shop

Every element in this scenario spells out danger. The outcome of something good coming out of this situation is nil. Cutting this exhaust pipe comes with the surprise element of cutting through your leg too. With a cigarette in his mouth and electric wires right next to him. This men is either oblivious to all these dangers or extremely confident in his skills.

Starting from the bottom

This might be the creation of a new sport. Bathroom climbing. If you like rock climbing, this bathroom might be for you. If you don’t, then maybe it’s time to start practicing it. You could go for a pee and return with a broken arm or you could always ask Spider Man for a little help.

It’s all under control

This brings the game Jenga to a whole new level. You wouldn’t want to be driving behind this individual. If this person is still working as tow truck driver then maybe this company is testing Darwin’s natural selection premises. This also might explain why women live longer.

In case of emergency, don’t panic

If you ever get your “pushes” and “pulls ” mixed up, then you should pay more attention when doing it with an emergency knob. It would’ve been great if someone had fixed that knob, but it sure doesn’t look like it. This is a perfect example of how a picture can speak more than words.

It’s truly remarkable what humans can accomplish when trying to access hard to reach places. In this case, it required lack of self care but a ton of commitment. This guy deserves a thumbs up for dedication but a thumps down for violating OSHA.

This one takes the prize for the most brainless individual of the year. But in case the campground you are at is flooded and with electrical problems, don’t worry. You can always count on him to save the day. This scene looks more like a suicide attempt than a day at work.

Duct tape is one of the most handy tool ever. But who would’ve thought of using it as a repair tool for the wing of an airplane? These guys did. We can only hope they are the only ones that do that. Is this doesn’t look safe is because its not. Hopefully all went well during this flight.

In this case, the splinter-able wood saves day. More importantly, it saved the precious snacks. In case you are asking yourself, yes, there was probably a better and safer way to do that. But at least one employee took matters into his own hands and “solved” the falling grocery shelf problem.

If you are thinking this is minimalistic art, it’s not. It’s a potential work hazard with a blend of irresponsibility. Warning: Don’t forget to turn off the sink or else the bathroom might flood. Also, watch out. If you never slipped in the bathroom, this might be the first time. Another OSHA violation on the books.

This looks like a classic case of misreading directions. The stakes in this situation are pretty high. This driver is putting not only his life, but other driver’s life in danger. It looks like he probably got confused between parallel and vertical. Calling 911 would be valid in this situation, but at least he’s in the right lane.

Another engineering innovation. But then again improvisation didn’t work to anyone’s benefit. It poses a good question. What to do when the brick foundation of structure is in risk of collapsing? This man’s answer would be to wrap it in plastic, but it’s definitely not the right thing to do. It’s perhaps the most dangerous Redbox out here.

We all know that the combination between water and electricity is dangerous to say the least and to his benefit, this man is an innovative individual. It’s an ingenious way to change a light bulb and to his credit the problem is of whoever put the lights in that place. The toy giraffe saves the day. There’s light at end of the tunnel.

Dump trucks weigh thousands upon thousands of pounds, which is why this photo becomes more and more distressing the longer we look at it. Needless to say, anyone or anything in the way of this truck when it turned over would have come out flatter than a pancake.

Don’t worry, he has a spotter!

It pretty much goes without saying that wood chippers are dangerous. Crawling into one, regardless of whether it’s been turned off, is even more dangerous. While we appreciate this worker’s buddy keeping a watchful eye on him while he’s making repairs or clearing a jam in the machinery, there are plenty of safer ways to accomplish this task.