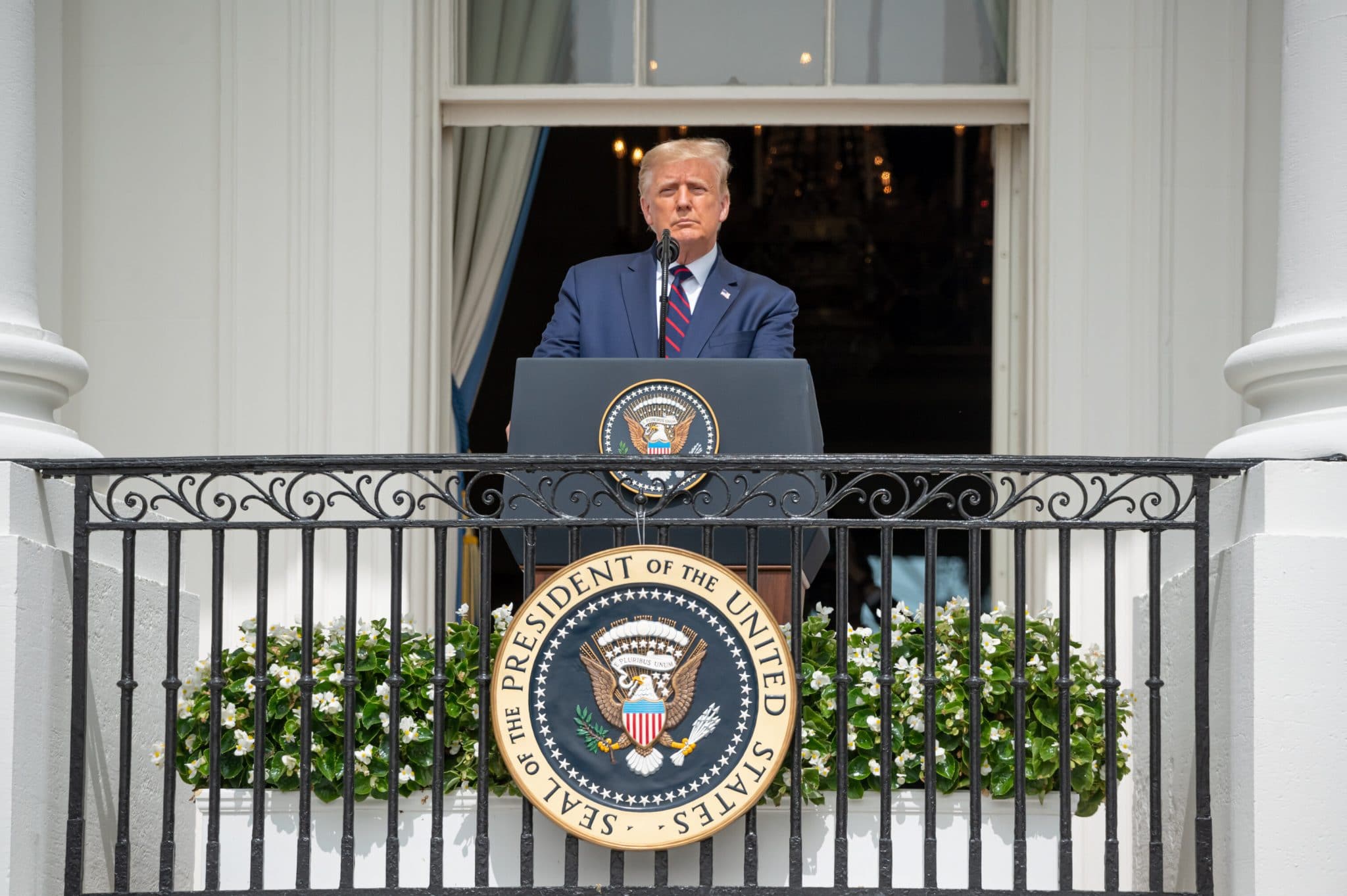 Ever wondered what specific jobs run the government? How about their corresponding salaries? While it is common knowledge that taxpayers cover the paychecks for their elected officials, many are oblivious that these salaries are all public record. Hence, we decided to look through the salary information for President Trump’s White House staff to see some of those jobs’ worth.

Check some of these pay information for people currently working in the White House. We also included some comparisons to the same positions paid during President Obama’s last year in the office. All salary information was accurate as of October 2020.

Becoming the nation’s highest officer comes with nice financial perks. The most obvious of which is the annual salary amounting to $400,000. Along with that, the president also gets a $50,000 expense allowance each year, a $100,000 travel account, and $19,000 allocation for entertainment, according to CNBC. Every president, starting from George W. Bush who assumed office in 2001, has earned this amount.

Vice President Mike Pence, like his predecessor Joe Biden, makes $230,700 every year. That paycheck has been the same since 2010. Pence was supposedly due for a slight raise in 2019 that amounts to $243,500 a year. However, it was put on hold in light of the government shutdown that was happening at the time.

Meadows took the position in March 2020, making him the fourth chief of staff for Trump’s office. Despite a generous salary, his annual earnings did not gross more than $200,000 unlike his predecessor Mick Mulvaney. Mulvaney was one of very few White House employees that made $203,500 in 2019. In comparison, Obama had five different people in the role during his eight years in the White House, with Denis McDonough earning $176,461 in 2016.

The spouse of the president also gets her own staff, and the person in-charge also receives a nice paycheck. Stephanie Grisham took over as Assistant to the President and Chief of Staff to the First Lady and Spokesperson in April 2020 after Lindsay Reynolds left the position. Previously, Grisham had held White House roles including the press secretary. During Obama’s term, first lady Michelle Obama’s chief of staff was Christina Tchen, and she made $176,461 per year.

Larry Kudlow may only be listed as an assistant to the president for economic policy, but he also serves as the director of the National Economic Council. He has previously worked in President Reagan’s administration and has hosted CNBC. Since assuming office in April 2018, Kudlow has averaged $183,000 yearly for his work directing the president’s economic policies. Under Obama, Jeff Zients received $176,461 for the same job.

Another White House employee with an average pay of $183,000 per year, Robert C. O’Brien is Trump’s national security advisor. He took over the position from John Bolton in September 2019. His role involves reporting matters of national security to the president, and serving the national security council, which produces sensitive intelligence information. During Obama’s tenure, Susan Rice made $176,461 in 2016 in  the same position.

Trump’s current media spokesperson, Kayleigh McEnany, is one of the highest-paid members of the White House staff. Regarded as one of the toughest duties in the office, it is no surprise that McEnany is already the fourth person to hold the position since Trump’s ascension in 2017. The first press secretary was Sean Spicer, who abruptly resigned in 2017. His replacement, Sarah Huckabee Sanders, also resigned in 2019 leading to Stephanie Grisham and then McEnany, to take over the role in April 2020. In 2016, Obama’s press secretary, Josh Earnest, made $176,461.

Assistant to the President for Trade and Manufacturing Policy (Peter Navarro) – $183,000

Under Trump’s term, Peter Navarro is one of the 22 White House employees that earn $183,000 per year. The Harvard alum is the president’s foreman in trade and manufacturing policy, and has been part of the cabinet since the beginning. Trump created the Office of Trade and Manufacturing Policy in 2017, which means Navarro has no predecessor to compare his salary to.

Assistant to the President and Director of Presidential Personnel (John D. McEntee II) – $183,000

When the president needs to fill a position, he will seek assistance from the Presidential Personnel Office. This office is responsible for vetting possible candidates and making recommendations to the president for potential appointments. John D. McEntee II (not in the picture) earns $183,000 a year as the director of PPO since assuming office in February 2020. During Obama’s term, Rodin Mehrbani held the position and made $172,200 in 2016.

Assistant to the President and Senior Counselor (Kellyanne Conway) – $183,000

Many White House staffers have the title of assistant to the president, but only Kellyanne Conway is regarded as a senior counselor. She has been with Trump since the early days of his campaign, and was graciously rewarded for her hard work. In fact, she is one of its highest-paid members of the staff, receiving a salary of $183,000 per year. However, Conway announced at the end of August 2020 that she was leaving the White House. Meanwhile, Obama didn’t have a staff position called senior counselor, so it’s difficult to compare her salary to previous advisors.

Pat Cipollone was an expert in commercial litigation. Cipollone became counsel to the president in 2018 and gained national attention as Trump’s lead attorney during his impeachment trial. Cipollone’s role earned him an annual salary of $183,000, a paycheck considered highest among the White House staff.

The National Economic Council was established in 1993 to provide the White House leadership in all areas of economic policy. Trump has several employees with the title of ‘special assistant to the president for economic policy,’ all of whom make at least $120,000 per year. However, as deputy director of the National Economic Council, Brooke earns $158,000 annually. Surprisingly, that’s slightly under Andrew Olmem’s $168,000 in the same role. On the other hand, Jason Miller made $149,654 in 2016 during Obama’s presidency.

Information technology is an integral department in every workplace, and White House is no exception to this. Obama recognized the importance of keeping the office’s tech in prime condition, leading to the creation of the position during his term. David Recordon was his director in 2016, who made $121,752 annually. Currently, the position has been held by Roger L. Stone since February 2019. He is being paid $168,000 per year.

The White House social secretary plans and executes all social events hosted by the White House. Since the position has less involvement with politics, the Washington Post named it the “least controversial” job in the building. First lady Melania Trump chose Anna “Rickie” Niceta as social secretary because of her two-decade experience as an event planner. Niceta was paid $168,000 a year in the role, compared to the $119,723 of Deesha Dyer in 2016 under Obama.

Molly Michael is designated as the official deputy assistant to the president and executive assistant to the president. She earns a salary amounting to $158,000 per year for essentially being Trump’s right-hand woman. Michael got a significant raise in 2020, as her 2019 paycheck was only $120,000. There are eleven other people in Trump’s administration with executive assistant titles, each of whom makes between $48,000 and $77,700 per year.

Julia Hahn previously worked at “The Laura Ingraham Show” and Breitbart News before joining the White House Communications Team under Steve Bannon. Currently, she earns $158,000 as a deputy assistant to the president and deputy director of communications. Meanwhile, Obama’s Director of Communications Jennifer Psaki received a salary of $174,714 in 2016.

The ethics counsel provides legal advice to the president on matters of ethics. Trump has two attorneys on payroll regarded as ethics counsel. The highest-earning of them was identified to be Monica Ashar, receiving a paycheck of $147,458. Obama had two ethics counsel attorneys as well, with the highest-paid earning $123,406 in 2016.

Trump has three speechwriters listed on staff, with Brittany Baldwin and Theodore Royer identified as highest-paid of this set of employees. They were both paid $135,000 for making sure the president has thoughtful remarks to deliver at his speaking engagements. On the other hand, Obama had nine speechwriters on staff. Their salary ranged from $42,613 to $176,461 per year as of 2016.

The director of the White House travel office is responsible for booking travel and accommodations for press corps members who accompany officials on trips. They are also in-charge of receiving payment in return from various media outlets. Bethany Pritchard currently holds the position after starting as a staff assistant in Trump’s administration in 2017. Pritchard’s 2019 salary was $92,400, which was a bit higher than Ashley Tate-Gilmore’s, who previously did the job for Obama and was paid $77,625 in 2016.

The White House is one of the most famous residences in the world and sees many tourists every year. Hence, the White House Visitors Office helps maintain the facilities and hosts tours to guests. Dana Hurtik made a salary of $106,000 in 2020 as the office’s director. On the other hand, Ellie Schafer held the same position under Obama, and earned $116,679 in 2016 for her work.

The White House has a lot of important affairs to document and video is one of the primary tools used for event coverage. Trump’s administration keeps two videographers on staff. Samuel Brown is the White House’s senior videographer and makes $80,000 a year, while the other one gets paid $72,700. Meanwhile, Hope Hall was the Obama White House’s sole videographer on staff. She earned $76,095 in 2016 for filming the president’s biggest moments.

Kathleen M. Porter was once a White House intern in 2019 before moving to her current role. The salary report reveals that she made $53,000 as the receptionist of the president’s offices. In 2016, Obama’s West Wing receptionist was Leah Katz-Hernandez. She received $48,000 pay for her work.

President Trump earned praises for keeping his White House payroll lean, which extended to two of his closest advisors. The president’s daughter, Ivanka Trump, and her husband, Jared Kushner, hold the official titles as advisor and senior advisor to the president, respectively. The White House salary report listed both their names but identified their pays as $0, as both have chosen to forgo a salary for their role.