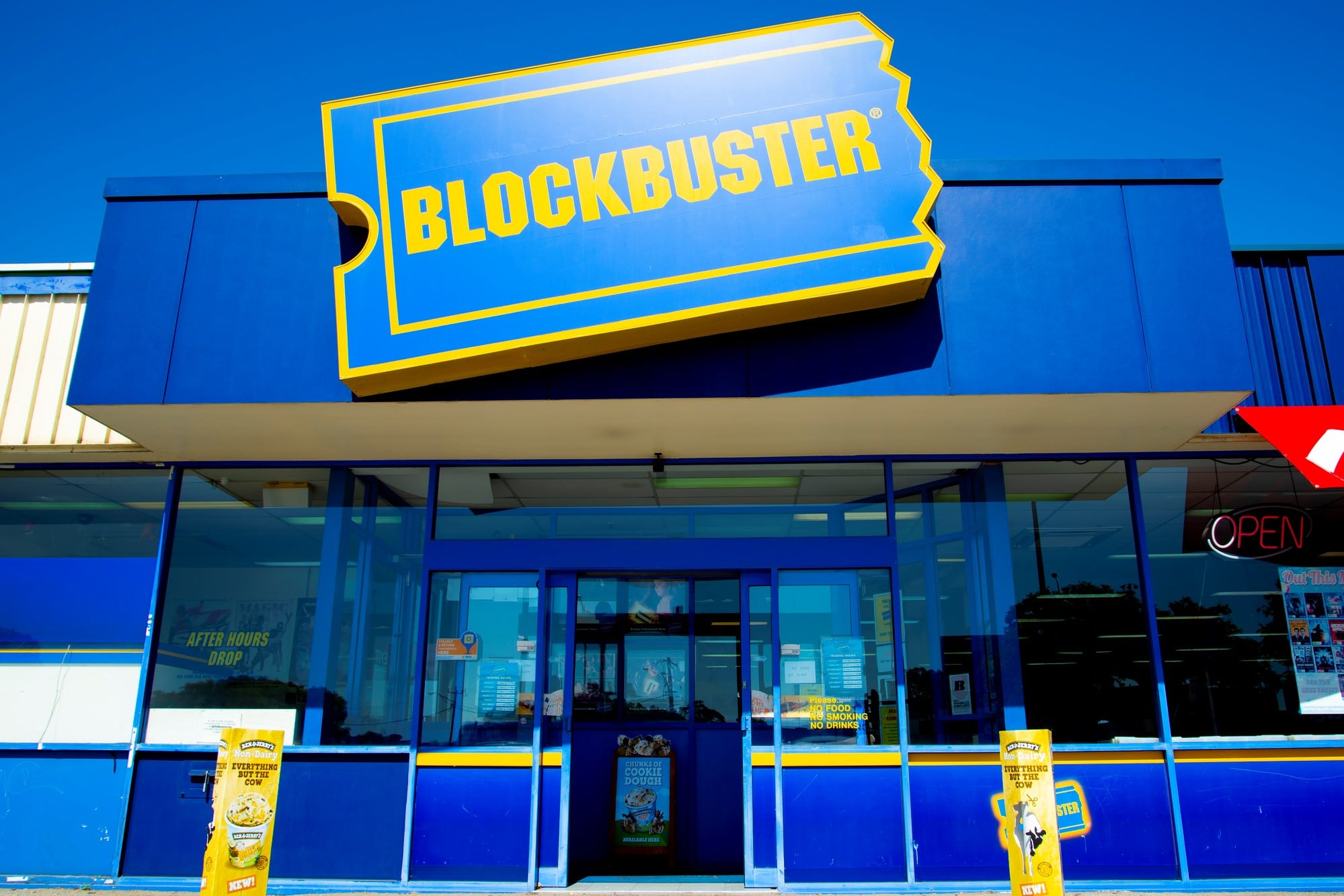 We love the convenience of online shopping as much as the next person. But those of us who were around during the heyday of malls, and some of the coolest stores known to this century, miss spending hours browsing and buying with friends. Or just browsing.

Here are some of the stores we loved in the 80s and miss the most today!

Picture it–America, 1982–a young child is dragged to the mall by her big sister who needs an outfit for the Bon Jovi concert. What is that child to do while her sister tries on tube tops and hot pink spandex pants? Suddenly, she spots a store that is filled completely with toys! An ethereal light shines over the store (the giant KB) and she spends hours rifling through Barbies, remote control cars, and board games. Toy stores in malls saved our little 9-year-old selves from the doldrums of clothing stores, and we would like to say thank you!

We’re still salty about this one. Tower Records was like Disneyland for music lovers. Imagine! We could walk into a store and instantly access all the music we ever wanted to listen to! Okay, sure. We just described our Smart Phones, too. Except for the “walk-in” part. Tower Records existed at a time when we didn’t have access to music unless we actually had the record, cassette tape, or CD. We could roam throughout the store, pick up records, and judge the record cover art with our friends. Some of these stores even had little booths where you could listen to music before you bought it. Buying music was an experience. It’s something we did with our friends after school or our parents on the weekend. It was an activity that brought music lovers together, and we do miss this very communal aspect of the music industry.

Before we had the Internet, we had to rely on magazines, TV, and stores like this to bring us the Hollywood gear we needed to be super cool in school. Not only did Suncoast Motion Picture Stores sell movies on VHS, as well as cassette tapes–and later CDs–but it also sold rad movie pictures, t-shirts, and even action figures. It wasn’t only about getting the movie you needed for your birthday slumber party, it was also about filling up your bedroom walls with contemporary culture swag so everyone who came over knew you were up-to-date and in the know. Now, we have Amazon for that.

Afterthoughts For All Your Cheap Jewelry Needs

There used to be two places to buy cheap jewelry that was definitely on-trend, Claires and Afterthoughts. Both stores had basically the same vibe and most of the same styles. They also had a rivalry as big as Sonic vs. Mario. We loved walking around both these stores looking for defining pieces of jewelry we hoped would make us more popular at school and more stylish while cruising the mall. If we were feeling particularly risky, we would go for a pair of fashion glasses that made us look studious yet casually alluring to our Chess Club crush. Eventually, Claires bought out Afterthoughts, and we only had one place to go. We made the most of it because we had reputations to uphold!

Waldenbooks, Where The Smart Kids Cruised

Today’s kids don’t know the difficulty of having to buy their books and their coffee in different places. Guys, we used to go to book stores to buy books, and coffee shops to buy coffee. We never dreamed the two would meet! Until, of course, we walked into our first Borders or Barnes & Noble. Before the bookstore cafe was a thing, the mall-based bookstore, Waldenbooks was bringing higher education to the masses in the form of easily accessible books. Sure, you could go to a library, but then you wouldn’t be able to head out the door, take a left and be at your favorite clothing store. Waldenbooks was a great place to shop for yourself, buy a few gifts, and then meet up with your friends to go cruising for guys. It didn’t suck you in and keep you four hours like the bookstore-cafe combo establishments!

Blockbuster Was More Than a Video Store

The NeverEnding Story (1984), Working Girl (1988), Beverly Hills Cop (1984), and Ferris Beuller’s Day Off (1986). What do all these films have in common? If you grew up with them, you probably rented them from Blockbuster at one time or another. Blockbuster was more than just a video store. It was a Friday night destination. If you had a date, it would usually begin with dinner, go through Blockbuster, and end up in your living room watching a movie. If you had a birthday party, you were in charge of entertainment, which meant a trip to Blockbuster. If you wanted a part-time job where you could see all your friends on the weekend and be the cool kid with the most up-to-date info on entertainment? Blockbuster was the place to be! Out of all the stores mentioned in this article, this is the one we miss the most!

Sharper Image Gave Us an Unrealistic Glimpse Into the Future

Sharper Image was a reflection of our love for the future and outer space. The idea that one day we would break the bonds of Earth and live like The Jetsons–flying around with jet packs, being served by robots, and talking to people through Holograms (which is basically Facetime). This mostly mall-based store was just pure fun. It was also purely expensive, which is why most of us never bought anything–we just played with all the cool stuff. For example, remember those life-like and life-sized mannequins they sold to make it look like you weren’t alone in your car or at home? Did anyone actually buy those? Or did we all just put our arms around them and pretend like we were on a date to make our friends’ laugh?

The Limited Finally Hit Its Limit

If you had an interview, a business casual event, or you just wanted to take things up a notch for picture day, The Limited had your back. One of the reasons we loved this clothing store in the 80s is it was created for young women. Older women had plenty of options when it came to shopping for business casual attire. We basically had one place, and this was it. Another reason we loved this store is that it was trendy but they changed their fashions up more quickly than other retailers so we weren’t all walking around with exactly the same shirts and pants. We miss you, The Limited. Incidentally, if you loved their clothes you can still look for them at Belk department stores under The Limited brand name, but there are no more brick and mortar locations to visit. Booo!

This store was actually a product of the early 90s, but we’re adding it here because it was similar in style to Disney Stores, which were a product of the 80s. These studio stores were just fun! Warner Bros. Studio Stores sold Looney Tunes, DC Comics, and other merchandise based on Warner Brothers films. They usually had a mixture of music and movies playing in the background, and/or on big screens throughout the store. They also sold t-shirts, games, action figures, stuffed animals, and other stuff you didn’t need but just had to have. We think this store found quick success as a result of the many popular cartoons Warner Bros. was producing in the early 90s. Shows like Animaniacs and Tiny Tunes had huge audiences! Eventually, these stores closed down. Probably because it was easier to find swag online than it was to visit a brick-and-mortar location.

There was a time–before cell phones, tablets, and Smart TVS–when we didn’t know what to stare at for hours at a time. We wandered around the outdoors playing games, listening to music, and watching the occasional movie at the movie theatre or on VHS. But our eyes were so bored we had to create things to entertain them. Then, like a beacon of mesmerizing illusion, came Magic Eye stores! Magic Eyes were computer-generated illustrations that looked like colorful TV static at first. Then, turned into a picture if you could make your eyes go lazy enough to summon the image. The technology allowed us to see 3D images while staring at 2D patterns. And no, this isn’t a joke. We spent hours staring at static in malls with our friends. We are truly the Greatest Generation.