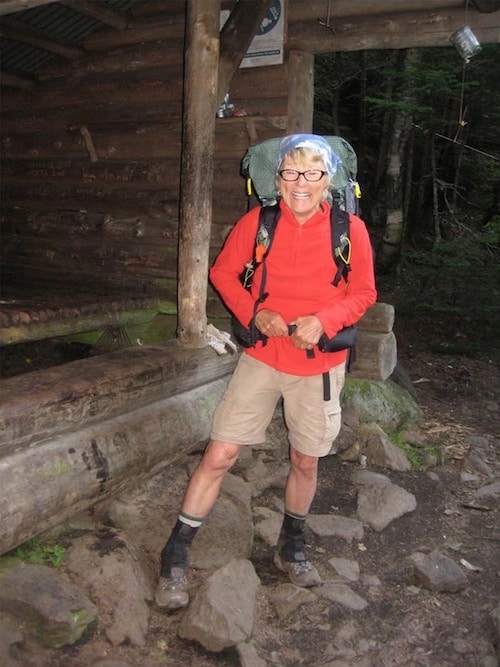 Even the most experienced hikers make mistakes. In the case of Geraldine Largay, one costly error would result in her vanishing overnight. What started out as a milestone hiking trip quickly turned dangerous. From her mysterious disappearance to the statewide search and rescue, this unfortunate hiker was lost but eventually found.

Gerry was a passionate hiker who loved the great outdoors. Married to her long time husband George, she was ready to embark and follow her dream, which was to hike across the 2,190-mile-long Appalachian Trail from Maine to Georgia. In her 60’s, Gerry was conscious about living a healthy lifestyle. She would spend hours exploring the woods with her daughter and grandchildren which makes the story behind her disappearance even more puzzling.

The Appalachian Trial is considered to be America’s longest trial and to Gerry, accomplishing this achievement was her obsession. The trek usually takes five to seven months to complete, and at the age of 66, Gerry felt ready for it. She was enthused to embark on the journey and prepared herself physically and mentally before starting the expedition. Little did she know that her preparations were not enough for what lied in front of her.

Ready to depart for the expedition of a lifetime, Gerry invited her good friend Jane Lee to come along. George, her longtime husband did not accompany them, however he set checkpoints along the route to stop and assist them with whatever was needed. Carrying her black journal, Gerry decided that she was also going to take notes along the hike, so they decided go slow and take their time. And right before the embarking, she wrote, “This has been a long time in the planning, and we are excited and a little nervous to begin…”

From the get go, George was worried. He was certainly felt uneasy about it, specially because Gerry had jut recently recovered from a back injury. Being such a strenuous hike, George also worried about his wife’s overall health and couldn’t help but think about the worst case scenarios. But all in all, George was very supportive of his wife’s dream and did everything he could to try to help her achieve it. However, the planned check points they set along the route did not work as they intended too.

While trekking, Jane and Gerry quickly realized they were perfect adventure buddies. Covering a lot of ground together, they would always watch each others back and support each other through the thick and thin. However, within two months into their hike, a family emergency came up and Jane had leave. That meant that Gerry would have to continue the adventure by herself and she was determined to do so. However, Jane felt extremely uneasy about leaving her friend. Without anyone watching her back, Gerry would now have to be even more careful and the more she hiked, the higher the stakes got.

Trekking solo, Gerry was 200 miles from reaching the end of the trail. She was the closest she had ever been from reaching her goal. But she had to stop to rest and fortunately found shelter. She stayed a night in this shelter and met another fellow hiker affectionally known as Dottie. Gerry woke up the next and was ready to continue her voyage. She was only 22 miles away from meeting her husband on a check point and her new friend, Dottie asked if she could snap a picture of her and this was the last picture ever taken of Gerry.

Lost in the woods

Before departing to the next check point, Gerry texted her husband letting him know she was heading his way. And according to the previous itinerary they both had planned, George would be waiting for her at the check point the following day. After several hours hiking she had to stop to empty her bladder. Finding a hidden place to do that, proved to be difficult, consequently, she went too deep into the forest and could not recognize her surroundings.

Directionless and lost in the woods, Gerry took numerous wrong turns and a feeling of distress started to settle in. As the sun started to set, Gerry started to panic. She then decided to text her husband to let him know she was officially lost. With no service in the desolate forest, Gerry began to desperately look for service. Admitting her defeat, she decided to pitch a tent and continue her search for cellphone service the next day. But sadly, she was never able to find service and George never got the message.

The following morning, Gerry woke up to a downpour, which alarmed her even more. That was the day she was suppose to meet her husband. Even without cellphone service she sent another text saying “lost since yesterday. Off trail 3 or 4 miles. Call police for what to do pls. Xox.” This text message also failed to send and being lost without anyone knowing made Gerry panic. A truly life threatening situation.

Awaiting at the meet up location that had previously agreed, George patiently waited for Gerry thinking that the rain had delayed her arrival. The moment the skies cleared up and the rain stopped, George was expecting to see Gerry at any given moment. But the moment never arrived, so he decided to report her missing. With a certain sense of urgency, the police organized a search party 22 miles away from the check point, around the area she had last taken shelter.

In the meantime, the clouds vanished, the sun came out and Gerry decided to take advantage of it, so she continued her trek. She eventually found a stream with access to drinking water and became confident that she could survive until someone came to rescue her. She also had a little bit of food in her backpack, which she tried to maximize by eating small amounts of it daily, but she quickly ran out of it. With no food left and only drinking water, Gerry was bound for the worst.

At that point, all the hikers and hotel managers in the area were aware of her disappearance. The rescue team kept looking for clues but none of the clues found belonged to Gerry. Her friend Dottie eventually got the news that she was missing and decided to help by posting images of Gerry and sending out fliers around the area. The days passed and the hope of finding Gerry diminished. False sense of hope arose after a group of hikers reported they had seen a tired elderly hiking by herself.

No clues and no progress

Kevin Adam, who was part of the search crew remained optimistic and believed that Gerry was still alive. However, besides not being able to find any clues, the search team was also searched the wrong area. Search teams were not having no luck. They thought the visibility might be better from above the trees, so they sent out of helicopters. Gerry could hear the helicopters fly over her and that made her a little more optimistic. She waved her hands and made as much noise as possible, but was never spotted.

It was difficult to see through the tall tress and thick brushes. Gerry soon realized that all of her efforts were worthless. Hungry and with low energy, she began dwindling with the fact that she was going to starve to death. She tried her best to survive, she attempted to send a text message one last time, but with no network, the harsh reality of it all hit her. Her chances of surviving were nil.

It had been nine days since she had last eaten, so she decided to give one last shoot at her chances of survival. Visibly weak, she used her last physical energy to light a fire to potentially be spotted by the rescue teams. But after numerous misattempts and being led by false evidence, the chances of being saved by the rescue team became bleak. On that same afternoon, Gerry accepted her tragic fate and wrote a goodbye letter in her journal. After two years missing, a forester working for the Navy stumbled across her dead body wrapped inside a sleeping bag. He had no idea of the magnitude of the situation. The news went out and Gerry’s family and friends were distraught to find out what had happened. Two years later this mysterious case was finally given closure.