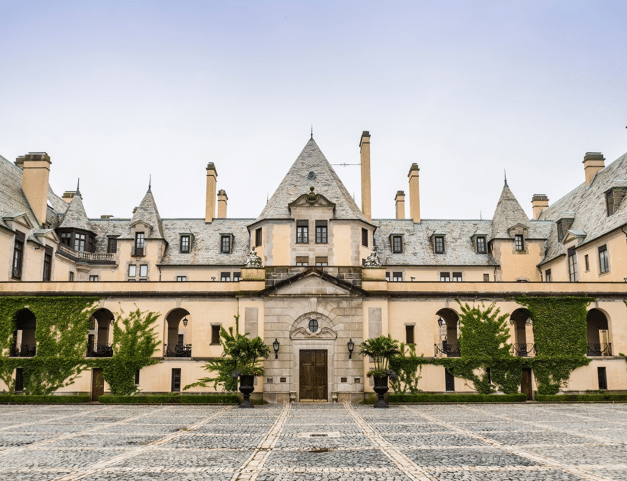 When it comes to castles, you probably think of ancient European fortresses far, far away – but did you know there are several magical, mystical estates you can visit right here in the US? Built by eccentric Americans instead of medieval royals, many USA-made castles serve as museums or grand event spaces, with their towers, turrets, and all. One castle is located on a tiny, isolated island, while another hosted a Jonas Brother’s wedding. Elegant and impressive, these are some of America’s greatest castles.

What’s more picturesque than a castle? A castle surrounded by vineyards, of course. Located in scenic California wine country, Castello di Amorosa (the Castle of Love) is a castle winery with 121,000 square feet and 107 rooms. Authentic medieval features include a moat, armory, stables, and torture chamber, as well as five towers and a drawbridge. Is it just us, or does wining and dining in Napa Valley sound even more delightful when a castle is involved?

Known as America’s Largest Home with 250 rooms and 65 fireplaces, the Vanderbilt Estate was the lavish country home of millionaire George Vanderbilt and his family. Now open to the public, the home (which is basically a palace, given its grandeur) features many of its original, ornate furnishings and over 8,000 acres of gardens and grounds, including a rose garden with over 250 varieties and a conservatory with 40-foot tall palm trees and over 1,000 orchids.

Originally called the Seventh Sister (named after the hills it sits on), Gillette Castle was built by actor, director, and playwright William Gillette. Known for his Sherlock Holmes portrayals, Gillette built the castle as his retirement home, and made several unique and oddball additions during construction. Furnishings include couches built into the walls and floors, carved wooden light switches, and a moveable table mounted onto a track. Each of the castle’s 47 doors has its own unique and intricately carved wooden puzzle lock, with some more difficult to open than others.

It’s hard to believe what’s now one of the largest museums in the world started out in one red-bricked castle. Completed in 1855, initially the Smithsonian Castle was the only building the Smithsonian Institute owned and operated out of, with a large exhibit hall on the main floor, various research rooms and laboratories, and living quarters for the museum secretary and his family. Since the Institute has expanded into 17 museums and galleries over the years, today the castle serves as the Smithsonian Visitor Center and houses several administrative offices.

Château Laroche, aka the Loveland Castle

Serving as a medic during World War I, Harry Andrews toured some of Europe’s greatest castles and came back to the United States determined to build one of his own. Andrews built Château Laroche (Rock Castle) all by himself, making some of the bricks using milk carton cement molds, and today guests can tour the castle or rent it out for events. They can also picnic on the grounds or look for ghosts, as the site is supposedly haunted.

Since one of a castle’s initial purposes was for defense, we’re impressed by the isolated island estate Boldt Castle. Built on Heart Island in the Thousand Islands area of New York, the castle was constructed by George Boldt, proprietor of the Waldorf Astoria Hotel. What makes the property unique other than it being on an island is that it boasts three distinct structures that all appear to be castles in their own right: the main castle at the island’s center, the northern Power House, which once held the island’s generators, and the southern Alster Tower or Playhouse, which had several recreational uses rooms Boldt family including a bowling alley and theater.

It may be called a mansion, but the building’s stonework and the towers beg to differ. Located in the Hudson Valley, Lyndhurst was originally built for politician and military man William Paulding Jr in the 1830s and 40s; however the mansion we now know today doubled in size during the 1860s after undergoing new ownership. The name Lyndhurst (originally Lyndenhurst) comes from the large linden trees that grow on the property.

As the ongoing American dream of builder Jim Bishop, Bishop’s Castle is a fascinating, impressive and obsessive piece of architecture. Featuring twisting ironwork staircases, a 160-foot tall tower, a grand ballroom, and a dragon head sculpture that actually breathes fire, the fortress has a kind of wacky, unique charm quite unlike anything else.

Built as a home for Howard Gould and his wife, actress Katherine Clemmons, after a decade Gould Castle was demoted to the role of carriage house and servants’ quarters when Katherine decided the castle didn’t suit her. Subsequently, another home was built on the couple’s property just a few hundred feet away. As it stands today, the limestone structure is available for private events and hosts community yoga classes.

Once one of Long Island’s premier Gold Coast mansions, today Oheka Castle is a historic hotel and wedding venue with opulent interiors and vast, meticulously manicured grounds. A favorite spot for celebrities and film studios, Kevin Jonas of the Jonas Brothers was married at the castle, while the rooms and grounds have been featured in the TV show Royal Pains and Taylor Swift’s Blank Space music video. “Oheka” comes from the starting letters of the original owner’s name, Otto Hermann Kahn.