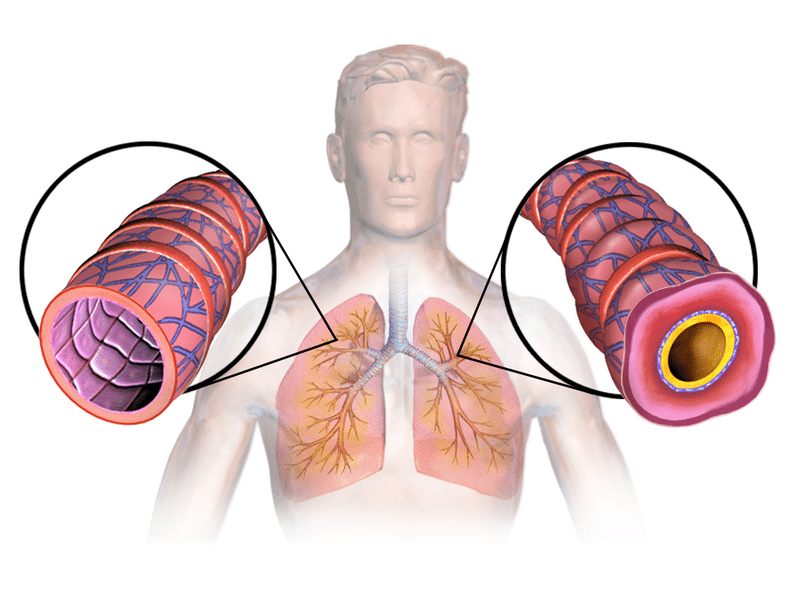 Asthma is a chronic (long-term) condition that can cause the lungs’ airways to become inflamed and narrow.

According to the CDC, 10 people in the United States die from asthma and asthma-related complications each day; that amounts to thousands of death a year. In other words, untreated bronchial asthma, or asthma, can turn into a deadly condition.

It is important to understand what causes the condition and some of the most common ways to treat it. It’s also necessary for people without this condition to know its tell-tale signs to possibly save the life of someone who has an asthma attack.

In order to understand asthma, it’s important to know a little anatomy first.

According to the National Heart, Lung, and Blood Institute, when a person is healthy, air can easily pass through the airways that stem from their lungs. The main two airways are called the “bronchus.” There are smaller airways that connect to them called “bronchioles.” Once someone breathes in air, it passes from their nostrils or mouth down the trachea and into both of the bronchus. Then, it branches into the smaller bronchioles, which fill the lungs with air.

But this process changes when someone becomes asthmatic. Specifically, these airways become inflamed. They swell and fill with mucus, so breathing becomes very difficult. All of the bronchus and bronchioles begin to spasm, so the airways are constricted, too. These events are all part of the condition known as asthma.

What Makes Asthma so Dangerous?

According to the American Lung Association, serious problems can occur if the bronchi stay inflamed for too long. Namely, airways can become damaged to the paint that a person will have precious little oxygen in their bloodstream. So not only will they struggle to breathe, but the brain and all of their vital organs will be starved of oxygen, too. If starved of oxygen too long, tissues and organs can shut down, leading to death in serious cases.

What are the Symptoms of Asthma?

The CDC states that asthma is a chronic condition that usually begins in children, although it can start at any stage of life.

Initially, there will be a persistent cough that doesn’t seem to go away and weakness and lethargy during any form of laborious exercise.

A whistling sound will come from the lungs as the person wheezes constantly. But the most dangerous symptom of asthma is repeat occurrences of asthma attacks.

It is common for a person having an asthma attack to clutch their throat or fall to their knees as their airways constrict and fill with mucus. They will gasp for air and struggle to breathe. The lips will turn blue, and they will look very anxious.

There are plenty of triggers, causes, and risk factors for this condition, including the following:

While modern medicine has siginficantly improved health outcomes for asthmatic people, this condition currently is only treatable, not curable. In other words, people can manage this condition, but they cannot be cured of it. So, while asthma attacks are not always preventable, there are ways to reduce their frequency and severity.

Ways to reduce the risk of asthma attacks include:

How is Asthma Diagnosed?

Most people who develop asthma later in life are able to fully describe their symptoms to a doctor to receive a diagnosis. But for young children who develop the condition, further testing is required, according to the American Lung Association.

Medical providers often perform chest x-rays to check for constricted bronchi and inflammation in the lungs. They will also have the child breathe into a tube that measures their oxygen input and output. Of course, the doctor will ask the parents of the child questions regarding any family history of lung conditions.

What are the Treatment Options for Asthma?

Fortunately, there are several medications available that can be used to treat and reduce the frequency and severity of asthma attacks.

An inhaler is an emergency device, which sends a puff of medication deep into the lungs. once there, this medication dissipates swelling and relaxes airways. Inhalers usually contain albuterol and steroids. Without them, someone could die from the starvation of oxygen.

Some of the most common medications medical providers prescribe besides inhalers are bronchodilators. A few of them (along with their producer and year of FDA approval) include:

According to Drugs.com, as of 3/12/19, the three most popular drugs used to treat asthma were:

Emergency Treatment for an Asthma Attack – What Everyone Needs to Know

People who have asthma usually know what to do if their symptoms suddenly flare up. They will keep their inhaler close by in their pocket, backpack, or purse. Sometimes, asthmatics store several inhalers, so they are always handy. But they have to find an inhaler fast, or they could pass out from the lack of oxygen.

What happens in such situations?

It is crucial that asthmatic individuals make it easier for other people to be able to locate their inhalers. Perhaps the most important method of doing so is for the individual to have an emergency medical bracelet. Another popular option is to have a labeled pouch or pocket on the person at all times. When an inhaler does not work, an abulance will need to be called. If a passerby is CPR certified, it might be necessary for this person to perform CPR until emergency medical help arrives.