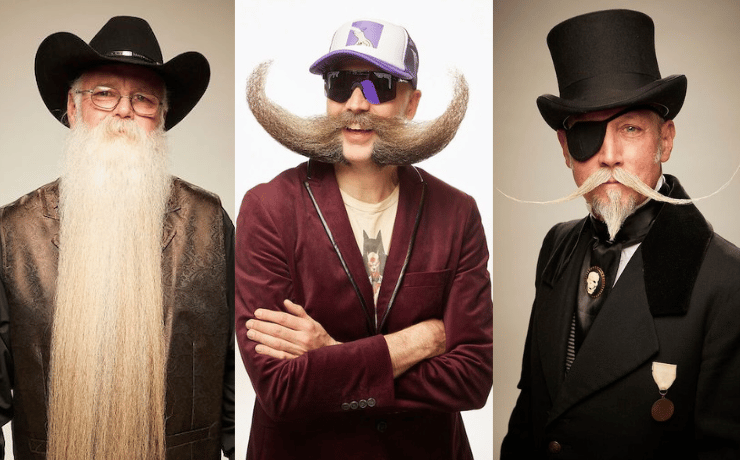 Facial hair isn’t for everybody. For some, it’s hard to grow. For others, it doesn’t grow in all the right places. Whether or not you can support a face full of whiskers, we all can appreciate the hard work and grooming time it takes to cultivate an awesome beard and a swoon-worthy stache.

Taken from facial hair championships (yes that’s a thing) and various strange corners of the Internet, here are just a few unique, beautiful, and sometimes bizarre pieces of facial hair.

This guy deserves an award of best doppelgänger. Those who watched the animated Japanese show, Dragon Ball Z will understand the reference. These red shades also an add a tint of modernity to this iconic character. On halloween this person could also receive an award for best costume, but maybe that’s how he always dresses himself.

The twirled mustache and old school vest makes him look like a young 21st century Sherlock Holmes. He’s modern take on this iconic character. If you always thought long twittered mustaches looked ugly, think again. This guy could be responsible for transforming it into a trend.

This guy could be Marvel’s new anti hero. The “complex beard man.” He could use his beard as a spider web to catch opponents and maybe eat them. In all seriousness, he is a probably a magician that distracts people with his beard/mustache and that’s why his magic tricks are always successful.

It is not evident that this person purposely decided to shape his beard exactly like a spider, but maybe he did. If he did or not is up to debate, but it certainly does look like an evil looking spider. He is a strong contender for scariest looking beard. Stay away from him if you have arachnophobia.

Some people do pony tails with their hair while others do it with their beard. It is a very rare sighting, but this man makes it look “cool.” Could he could be the second coming of Rapunzel? Yes, and instead of the long ginger hair it would be a thick long beard. That could work for him. Don’t be surprised if you see him on the big screens.

Say hello to the intellectual looking version of Gandalf, from the famous franchise, Lord of the Rings. It would be disappointing if he wasn’t as wise as he looks. He would not have any problems finding the ring. We can rest assure that he would figure it out by himself even if it got lost in his beard.

Who knew that so much could be said with a bearded mustache? This man certainly has a lot to say without even opening his mouth. At first glance, it is evident to notice his love for onion rings. After taking a closer look you can notice a rebellious statement of the an A that stands for anarchy. Hopefully he’s not running for president anytime soon.

If this guy opened a store it would be called The Bald & Bearded. In this store you would be able to buy beard products, combs for your beard, but nothing for the hair because he has none. The products would surely sell well if he was the face of the company (literally). With beard like that, many people would surely buy these products.

Ladies and gentlemen, this guy is the winner of the 2022 beard and mustache championship. Besides accomplishing this accolade, this is probably the longest mustache ever seen, which makes it great for social distancing. With a multi use mustache, this man definitely deserved the trophy. Appearance is not all that matters.

Although this guy’s beard is not as remarkable as the others, he does look like the friendliest out of the bunch. Also, his shirt matches his looks. The shirt he’s wearing has an image of an evil hog that kind of resembles him. The only difference is his gentle smile and lack of long horns.

In case you wondering, Santa Clause changed a little bit. This is the contemporary Santa. Wearing a tuxedo with no reindeers, this Santa probably sends people presents digitally or maybe he has a startup that does exactly that. This Santa certainly is more efficient. He probably got tired of getting stuck down the chimney.

Here’s the perfect example of a good mustache and beard combination. Bonus point for a great beard trim. This man makes it all look neat. Without the beard the mustache, the beard wouldn’t look as neat. They go hand in hand like rice and beans. We can be certain that this is man is revolutionizing the beard and mustache combo.

Here’s another potential candidate who was part of the Sons Anarchy cast. If he wasn’t, you can be sure that he has seen the show and owns a motorcycle (maybe he’s too cool to watch shows.) His facial hair posses a curious debate. Is his mustache longer than his beard? Let’s make a pool to decide.

Here’s the town sheriff to voice all your concerns. With a soft smile and hypnotizing mustache, if this man was indeed and sheriff of an old spaghetti western film he would always win a face off. This man’s town would always prosper since he looks like he owns a ranch and works in the oil industry.

If this man was a cartoon, he would probably be a villain who’s beard is made out of flames and he would use it to set his opponents on fire. All jokes aside, it hard to find someone with a beard this long and with this tone of gingerness. He won first place in this tournament and will probably win more.

This man possesses the least “manly” of all facial hairs here. He surprisingly won first place. The judges were probably more impressed by his silver fox looks. This man has success written all over him and we expect nothing less from him. It’s probably not the first time he won something.

Captain Kangaroo’s older brother is still alive. Not sure how. This man’s beard stands the test of time. He surely looks like an old school British detective with a serious case in his hands. If he’s not, then he probably should probably practice his British accent and pretend he is. Who wouldn’t hire him?

If pirates still existed they would look exactly like this. This guy is the portrait of the modern pirate. Now, imagine being in open waters and a scary ship approaches with a bunch of guys looking like that. You would either think it’s an open water fashion show or something strange is going on. This modern pirate looking fellow does not scare anyone.

He is probably a DJ. Maybe his stage name is Long Horned DJ. He probably tried this style of beard, people started recognizing him at the clubs and he decided to kept it. Whatever happened there it is interesting to notice that this guy’s beard also looks like an extension of his smile. Does his beard points downwards when he frowns?

The award for this man, would perhaps be world’s longest beard. It is hard to find a beard that hangs as low as this. From chin to toe, this man has one of the most memorable beards. It makes us wonder if he was an actor on the show, Sons of Anarchy. Either way he most likely owns a Harley Davidson.