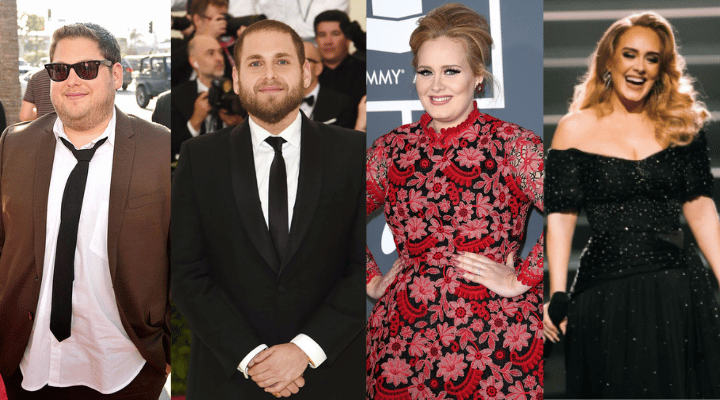 Talent comes in all shapes and sizes, but for some celebrities, the image-focused industry has been hard to navigate when they’re deemed too curvy for magazines, or “the funny, fat character” in every film. Regardless of fame’s demanding beauty standards, over the years a number of celebs have been inspired to get healthier and shed some serious pounds via exercise, better eating habits, and often, the funds to pay for personal trainers and dietitians.

Whether slimming down for health reasons or just to feel better about their bodies, these are the actors, musicians, professional athletes, celebrity chefs, and more who’ve experienced some stunning weight loss.

Singer and TV personality Kelly Osbourne used to be quite curvy, yet years ago she decided to get healthier and lose some weight. Through a combination of exercise and various diets, Osbourne lost 85 pounds, and has been rocking a slimmer figure ever since.

In addition to cardio, hiking, and yoga, Osbourne went on a number of diets including intermittent fasting, a plant-based diet, and a mushroom based diet known as the M-Plan.

For actor John Goodman, a combination of too much alcohol, too much sugar, and often eating late at night lead him to an unhealthy lifestyle where he kept piling on the pounds. Eventually fed up with seeing the numbers on his scale increase, Goodman gave up alcohol, enlisted the help of a fitness coach, and took up online workout classes in order to lose weight.

So far, Goodman has lost over one hundred pounds and has maintained a healthier diet and exercise for the last few years.

Jennifer Hudson worked hard to achieve her goal of being an actress and singer. Unfortunately, Hudson’s hectic schedule caused her to constantly ignore her health which led to weight gain.

Eventually, Hudson found the time to prioritize her health, and with a combination of diet and exercise including long daily walks, she lost 80 pounds and went from a size 16 to a size 6.

Comedian Rosie O’Donnell became unhealthy and overweight over time, which eventually resulted in a 2012 cardiac arrest. Physicians informed Rosie that she had come very close to losing her life, and needed to make some serious lifestyle changes to avoid future health problems.

After recovering from the attack, Rosie started the path to a healthier life with professional help from a therapist and a personal trainer. Since then, O’Donnell has lost more than 60 pounds and has had a much cleaner bill of health.

Jimmy Kimmel wasn’t always the sleek, bearded TV host we’re used to seeing our screens. Struggling to lose a few extra pounds, Kimmel went on a diet of just 2 protein shakes and a small dinner per day, and then gradually worked his way back up to a 2000 calorie per day diet, thus teaching his metabolism to burn calories more efficiently.

Afterward, the television host discovered the 5:2 diet, also known as the Fast Diet, where a person does intermittent fasting for 2 days a week (consuming just 500 calories each day), and then eating normally for the remaining 5 days of the week. It seems to have worked well for him so far!

Charles Barkley is definitely not the first person who comes to mind when you think of obesity. But once he left the court, the former NBA player wasn’t putting in enough time at the gym, and soon he began putting on some weight. The former athlete got back on track a few years ago via an intense exercise regimen, and lost over 40 pounds.

Barkley has also stated that eating lots and lots of vegetables aided him in losing his extra weight, and keeping it off.

Blogger and media personality Perez Hilton made a name for himself by writing about celebrities’ lives, and sometimes created controversary along the way. Deciding he wanted a healthier life and a slimmer waist, over the course of four years, Hilton put in the work to lose an impressive 70 pounds.

Reportedly, Hilton lost the weight the “old fashioned way” by eating better and working out regularly.

Once dubbed the “fat sister” of the Kardashian-Jenner clan, Khloe Kardashian decided to silence her critics and embrace her best self. With the help of a trainer and nutritionist, the socialite and media personality lost a reported 40-60 pounds after the birth of her daughter.

Lately, Khloe has commented on her love for her regular workouts, where she enjoys chiseling her body’s muscles into shape. The star has clearly been empowered by her slimmer yet far stronger frame. You go Khloe!!!

Those fortunate enough to have children know that parenthood is a life-changing experience. For comedian and TV show host Drew Carey, being a good parent to his stepson Connor was so important it became the catalyst for him to start living a healthier life.

By cutting carbs and gradually working his way up to intensive workout sessions, Carey lost an impressive 80-100 pounds.

Once much more on the curvier side, model, media personality, and former adult film star Mia Khalifa has worked off some excess weight in recent years, slimming down into a trimmer hourglass shape she’s very proud of.

Talking about her weight loss journey, Khalifa said she strives for balance when it comes to her body, claiming to “work hard and eat carbs.” Eating right and exercising often, Khalifa still holds a passion for food and living life to the fullest.

Award-winning celebrity chef Graham Elliot became well-known for being one of the original judges of MasterChef USA. Surrounded by food every day, Elliot struggled to maintain a healthy weight, and eventually reached almost 400 pounds.

Realizing health complications were just around the corner, the chef decided to put his health first and focus on losing some weight. With the aid of a sleeve gastrectomy surgery, Elliot has lost 150 pounds and continues to live a healthier life today.

Music industry legend Dr. Dre rose to fame in the 80s and 90s as a rapper and later record producer. Known in the past for his lavish lifestyle full of unhealthy food, drugs, and expensive items (among other things), Dre started to put on some weight.

Later realizing it was time for change, the musician gave up drugs and started exercising and eating healthier, which led him to lose an astonishing 50 pounds in just two years! Due to these modifications, this legend has been able to live a life free from diseases or health complications…

Susan Boyle is most well-known for impressing judges and audiences alike during the popular Britain’s Got Talent show. At the time, Scottish singer was not overly concerned with her appearance, instead focusing on her blossoming singing career.

In the years since, Boyle also found time to work on her health, adopting a strict diet plan and hiring a fitness trainer to help her establish a better exercise regime. Since then, the singer has lost more than 50 pounds and is living a much healthier life.

Sasha Pieterse has always been known for her role on the show Pretty Little Liars. Unfortunately, the actress was often made fun of by others because of how curvy she is, yet people close to her knew that this weight was caused by Pieterse’s PCOS (Polycystic Ovarian Syndrome).

When Sasha joined the cast of Dancing with the Stars in 2017, the exercise helped her lose more than 20 pounds. Continuing on the path to better physical health, Pieterse changed up her diet, increased her time exercising, and has lost a total of 70 pounds since.

Due to her size, actress Melissa McCarthy was often cast in supporting roles instead of as a leading lady. Yet as her fame grew and she started gaining more prominent roles, McCarthy’s health started to effect her mobility and overall energy.

Deciding to make some lifestyle changes, McCarthy changed her diet and starting working out a lot more. Having lost 75 pounds and counting, McCarthy is reportedly feeling the best she has in years.

Actor and comedian Anthony Anderson absolutely loves food (he did host Carnival Cravings with Anthony Anderson on the Food Network, after all). However, once Anderson developed type 2 diabetes, he realized it was time for a change in lifestyle – one that included healthy eating habits and regular exercise.

Watching Britney Spears parade around in a schoolgirl uniform singing “hit me, baby, one more time!” you’d never imagine the singer-superstar struggled with her weight. Yet over the years, Britney had gained some unwanted pounds.

Making her physical health more of a priority starting in 2020, Spears started eating better and working out more frequently, resulting in a few less pounds and better muscle tone.

After her amazing performance in Precious, actress Gabourey Sidibe was met with a tremendous amount of love and admiration. Once her career was established with additional acting roles, Sidibe’s focus shifted to her health when she was diagnosed with type 2 diabetes.

Sidibe underwent weight loss surgery and has lost an estimated 150 pounds since. To maintain her health, she avoids junk food and soda, and watches her portion sizes.

When Matthew McConaughey was cast in the film Dallas Buyers Club, his character had contracted HIV/AIDS. Playing such a terminal patient who would naturally look thin and sickly, it was necessary for the actor to drop some weight to portray the role more accurately. Following an intensive ninety percent diet, ten percent cardio regiment, McConaughey managed to lose 38 pounds.

Unfortunately, such drastic and rapid weight loss took its toll, shrinking McConaughey’s muscle mass and stomach for a time. Thankfully after finishing filming, McConaughey regained all of the lost weight again.

Well-known actor Jonah Hill has always been known for his pleasant demeanor and his comic timing. But when Hill gained too much weight to maintain a healthy lifestyle, his doctor advised him to have gastric sleeve surgery.

However, Hill decided against it and instead opted for the traditional way of losing weight by simply following a strict diet plan and taking up physical activities such as Brazilian Jiu-Jitsu. Using these tried and true methods, Hill lost over 40 pounds.

Perhaps one of the most successful singers in the music industry today, Adele has also had her fair share of bad luck when it comes to health. For much of her life, she battled weight problems, which only worsened during her pregnancy.

Thankfully, this talented artist does not give up so easily. Instead of resorting to unhealthy methods such as starving herself or constantly exercising (which would leave no time for singing!), Adele chose an alternative that would allow her body to recover from being pregnant: following a low-carb diet and completing simple, daily workouts, which resulted in her dropping one hundred pounds!