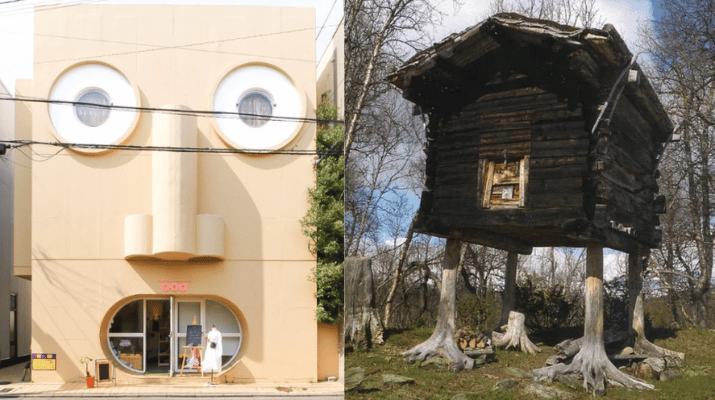 Oftentimes, architecture follows form over function, with new constructions built in the sleekest, most efficient styles possible. Yet sometimes designers get to have a bit more fun with their work, creating unique, eye-catching buildings that range from gaudy to impractical to just plain weird.

From high–tech, engineering marvels to structures shaped like mammals, reptiles, and man’s best friend, these are some of the strangest buildings around the world.

Kids don’t always like school, but what’s not to like about Kindergarten Wolfartsweier, an adorable cat-shaped school in southwest Germany? It’s fun, whimsical, and the “tail” at the back of the building doubles as a slide. Cutest. School. EVER.

Located in Paris’ eastern suburbs is Picasso’s Arenas, a set of residential buildings constructed in a spherical shape to evoke sunrise and sunset. While we can’t help but marvel at the perfect, circular symmetry, the gold, medalion-like design also brings waffles to mind.

This apartment building is full of trees.

Green, sustainable architecture is one building trend on the rise, as seen here at Condominio 25 Verde, an apartment building home to more than 150 trees. It’s beautiful, it’s lush, and it’s a glorious urban forest.

Also known as “The Big Basket,” the Longaberger Basket Building was once home to the headquarters of the Longaberger Company. While the company still makes its trademark baskets, the iconic building currently belongs to other parties, with talks of either keeping the basket interior as office spaces, or turning it into a hotel.

Afraid of bears? Try a cabin on stilts!

Tucked away in a Norwegian forest are two sleek, elevated structures known as the PAN Treetop Cabins. Designed by Espen Surnevik, both cabins sit over 25 feet in the air, and were fashioned with tall windows to better view the wildlife and surrounding scenery.

Built in 1927, this concrete coffee pot has been everything from a diner to a drive-in to a speakeasy to a dance club. Now considered a historical landmark, portions of the restaurant can be seen in the 1990 film I Love You to Death, starring Kevin Kline and Keanu Reeves.

Why go for sturdiness when you can be stylish?

When you think about skyscrapers, the word “top-heavy” probably doesn’t come to mind. While this Vancouver building is an impressive feat of design and engineering, it’s still a bit terrifying.

Nestled in a quiet Boston neighborhood is a rare, dodecagonal home, or a house with 12 sides. This geometric marvel is over 100 years old, with hexagon shapes repeating throughout the home’s interior and exterior. Our favorite detail, other than the playful honeycomb siding, has to be the “crown”-topped cupola on the roof.

Who knew a hotel modeled after such a dangerous predator would be so delightful? Located in Kakadu National Park (one of the largest national parks in Australia), the Mercure Kakadu Crocodile Hotel is definitely one of the more unique vacation getaways you’ll ever come across.

Um, you forgot to fill out the bottom of the building?!

This building seems like a kind of mullet: business on the top, terror on the bottom. Know for its impressive pedestal base, this Seattle skyscraper is often called “The Beaver Building” by locals, as it looks like a beaver chewed away at the bottom.

Call us chicken, but we’re not going in that house!

Based on Slavic folklore, this structure is inspired by Baba Yaga, a supernatural witch woman who lives in a forest hut that stands on chicken legs. While this tipped-over chicken hut is pretty amusing to the average eye, we hope Baba Yaga wasn’t too annoyed with her house being turned over like this.

Just a giant stone pineapple in the Scottish countryside…

Of all the fruits you could put on top of a building, a pineapple probably wouldn’t have been our first choice. The Dunmore Pineapple, a hothouse built in the 1700s, is ranked as “the most bizarre building in Scotland.” And yes, the building did in fact grow pineapples when it was in full operation.

Sleek and stunning, Singapore’s first professional art school skillfully blends the line between natural beauty and deliberate design. Made of three sloped, intersecting arcs, the school’s grassy roof helps insulate the building and cool the surrounding air, making for a stylish and eco-friendly college of the future.

Surprisingly, this is not a seafood restaurant…

Name: Unknown, though often referred to as “the Ecology Center”

Yangcheng Lake is known for its mitten crab, a delicacy so famous that China decided to construct a larger-than-life version of the tasty crustacean. Complete with hairy claws and white pincers, the building is three stories tall and roughly 250 feet long. For comparison, an actual mitten crab is about the length of a human hand.

Why’s there a cruise ship parked on top of those buildings???

There’s impressive, and then there’s Marina Bay Sands. A resort quite unlike any other, atop the hotel’s three 55-story towers is the world’s largest rooftop infinity pool. If the building looks similar, you might recognize it from the ending of the 2018 film Crazy Rich Asians.

Psst, Mr. Building, your fly is down!

Name: A Sprinkle of Night and a Spoonful of Light

UK sculptor Alex Chinneck blended elements of art, architecture, theater, and engineering when creating one of the most interesting art installations at Milan Design Week 2019. The architectural illusion drew over 200,000 visitors, with its mind-bending appearance of a building unzipped at the seams. Though the design is no longer standing, photos from the event attempt to do justice to this impressive visual feat.

What knockoff Star Wars ship is this?

Serving as a control tower and lighthouse for ships navigating throughout Yokohama Port, Yokohama Port Symbol Tower certainly stands out from your typical lighthouse with its unique, futuristic design. From the observation platform, tower visitors can watch ships and take in the panoramic views of Yokohama Port, Toyko Bay, and Mount Fuji.

Over 300 pieces of blue-tinted glass were used in constructing this larger-than-life glass slipper, which stands at just over 55 feet high and currently holds the Guinness World Record for the world’s largest high-heel shoe-shaped structure. A popular wedding venue and Instagram spot, all are welcome to witness the beauty of this big, blue shoe.

Instead of brick or siding, this building went with bushes.

Perhaps one of the most prominent features of the CaxiaForum museum is its striking Vertical Garden, standing at 78 feet tall and housing over 250 different species of plants. Designed by botanist Patrick Blanc, the hydroponic wall is a living piece of art and is home to an estimated 15,000 to 17,000 individual plants.

Currently under construction in rural, eastern Spain is this concrete marvel of engineering. Part of the Solo Houses project, this inverted pyramid is one of several unique vacation homes being built in the area, with each home boasting its own elements of innovative, sculptural architecture.

Why ride an elephant when you can tour one instead?

Imagine the chicken needed to lay this egg…

Artsy? Yes. Unnecessary? Also yes, but we dig it!

New life goal: retire in a cottage shaped like a giant pickle barrel.

This building has curves for days.

Love beagles? Then we have the bed and breakfast for you!

Name: Sci-Tech Complex, or the Science and Technology Park

Imagine telling your friends and family that you work in the big fish.

This carpet-shaped carpet museum is genius.

Is that a church, or just a really elaborate spinning top?

Name: Device to Root Out Evil

Belgium has been living in the future for a couple of decades apparently.

How…unique. Uniquely terrifying that is.

This house has seen some things!

That’s one way to keep the mice out…

Built in the 1700s, this strange log cabin is believed to have been a stabbur, a storehouse once used in rural Norway for storing food. A typical stabbur was often constructed on top of stilts or pillars to keep pests out. In addition to storing a farm’s meat, cheeses, and other foods, a stabbur was sometimes used to store valuables.