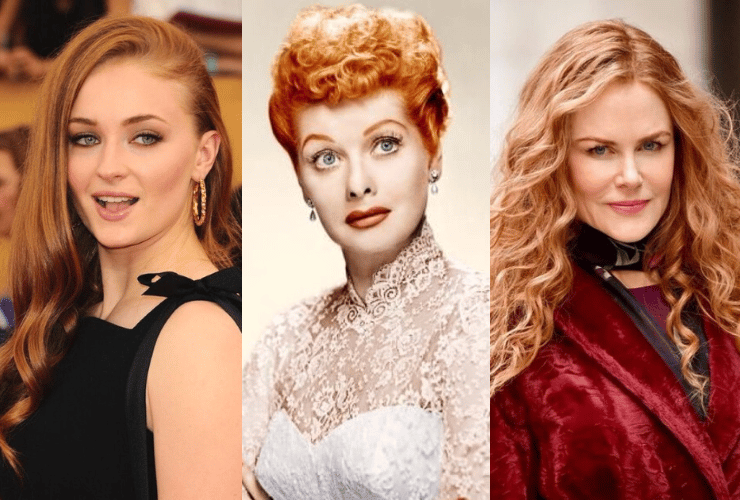 Red hair is pretty rare, yet the red carpet is known for sporting a variety of redheads, whether they’re natural or not.

From talk show hosts and Oscar winners to comedians and Harry Potter favorites, here are just a few celebrity redheads.

Oscar winning actress Emma Stone’s trademark is her red hair, but  it wasn’t always like this. She adopted this hair color in the beginning of her career and kept it like that for the most part.

The young actress first came into picture when she played Jules in the comedic movie, Superbad. Consequently, she went on to play bigger roles and her performance and dazzling red locks on the movie La La Land shook Hollywood.

Since then, her career skyrocketed and her performances are quite noticeable in any movie she stars (not only because of red hair).

Even though it may look like Jessica Chastain spends hours in the hair salon, she doesn’t. The actress’s silky ginger hair is completely natural. She refuses to dye her hair any other color and uses wigs instead when the role calls for something else.

In her case, what you see is what you get, which is a reflection of her personality. Interestingly, she is able to bring this authenticity to the big screen which has proven to work. The Academy Award-nominated actress shows that authenticity can be a great quality.

On the same pedestal as the previous actros mentioned, Julianne Moore has played a range of characters throughout her career without changing much of her natural red hair. At the beginning of her career she thought of her hair color as disadvantage, but kept anyways.

On the same note, Julianne has won an astounding number of awards (one hundred and seventeen to be exact) including one Academy Award for best actress leading actress in the movie, Still Alice.

For Amy Adams, dying her hair red was more than an aesthetic decision. It was also a strategic move because since her natural blonde could’ve gotten her casted exclusively as a dumb blonde. So she decided to do dye her hair red so she could be seen with a different perspective and her trajectory as an actress shows that it was worth it.

The multiple times award winning actress demonstrates us that sometimes taking a risk can save your career. This decision opened many doors for her to play a variety of roles.

Karen Gillan is another example of how authenticity can be rewarded in the long run. In a recent interview, the actress mentioned that even though she was bullied when she was younger due to her height and hair color. She still believed that her uniqueness would eventually pay off and it did.

Her self belief led her to land roles on blockbusters movies such as Guardians of Galaxy and Jumanji. Also, rumors say that she left everyone in awe during her recent appearance on the red carpet.

Conan O’Brien is differs from the previous celebrities mentioned. Coming from an Irish descendants, the show host and comedian is well known for his natural red hair and his dry sense of humor.

After 28 years, Conan ended his career as a show host and ventured into podcasting. He continues to infatuate his guests with his sense of humor and his iconic laughter will definitely be missed on the late night show.

Besides being a phenomenal actress, Christina Hendricks is also known for her voluptuous figure and flaming red hair, which has gotten Mad Men fans eyes glued to their TV screens. Certainly, her performance and scrumptious beauty was so remarkable on the show Mad Men, that she got nominated for various Emmy Awards.

One of the coolest redheads around, Ed Sheeran has made being Ginger cool. Known for his pleasing voice, Top Ten hits and passionate fans (to say the least). Ed was encouraged to dye his hair, but the singer stayed true to his roots (literally) and proved that staying true to yourself can be beneficial in the long run.

Even though she is a natural redhead, Bryce Dallas Howard loves adding a more vibrant touch to her hair. On top of being an outstanding actress, there a couple of interesting facts about her. She’s the daughter of the famous director, Ron Howard (already mentioned in article) and both her dad and her mom are gingers.

Besides having a famous dad her terrific performance playing Claire Dearing in the movie, Jurassic World Dominion is just a small glimpse of how good she is. Audiences and movie critics have noticed that. .

We all know her as Eric Forman’s tall redheaded girlfriend, Donna Forman from That 70’s Show. Laura Prepon entered in our lives as a redhead, but different from other naturally ginger actresses, Laura has changed her hair color multiple times according to what each role requires.

To her credit, Laura has broken away from that iconic red headed character and managed to pave her way into Hollywood. Her great acting on the show, Orange Is The New Black proves this her extraordinary range.

Ellie Kemper is mostly known as the quirky secretary on the show, The Office. Although she first appeared as a brunette, it’s shocking to know that she is actually a natural redhead.

Ellie mentions that she was treated more seriously as a brunette than as a ginger. This factor alone weighed in her decision to remain brunette.

Nicknamed “Red” by his friends because of his Ginger attributes, Ron Howard’s freckled face can oftentimes be seen behind the cameras. The director, producer, actor and writer has won a variety of award and doesn’t plan on stopping so soon.

In other words, Ron is a modern renaissance man and is most commonly known for directing the movie, A Beautiful Mind which won four Oscars including best director.

Isla Fisher’s ginger locks are something almost everyone women desires to possess. In addition, she is funny and good looking, she really is the complete package. Her role as Gloria Cleary in the movie Wedding Crashers showcases all these qualities mentioned and more.It surely must’ve been a treat to work with a professional like her. Her co-stars Owen Wilson and Vince Vaughn must’ve enjoyed it.

Even though her career is not quite as brilliant as some actors mentioned in this article, Deborah Ann Woll’s physical looks and acting qualities are truly underrated. Her strawberry blonde hair and deep blue eyes make her look like scandinavian princess, but more than that, Deborah’s charm and professional tenaciousness is visible on the big screen. These characteristics are particularly noticeable on the Marvel series The Punisher, where she plays Karen, The Punisher’s allie/potential love.

Imagine the stunning actress Debra Messing as a brunette. Impossible, right? A curious fact is that she is naturally brunette, but she dyed her hair red early on in her career. Word on the streets say that she loved it so much that the Will & Grace star decided to keep it like that.

Rupert Grint, is mostly known as Ron Weasley, the Ginger actor from the movie, Harry Potter. Rupert embraces his natural red hair when playing any character. Easy to be spotted in public, he does not shy away from his fans.

Despite being Harry Potter’s sidekick for the most part of his career, Rupert followed his own road and won numerous accolades. As you young adult, his incredible talent is most noticeable on the horror series, Servant.

Sophie Turner, is a another perfect example of an outstanding actress who has succumbed to the fiery red hair trend (or perhaps made red hair trendy).

Is there a more famous redhead in all of Hollywood? We think not! Lucille Ball has been an iconic redheaded ever since the success of the I Love Lucy show. Her other shows Here’s Lucy and The Lucy Show had similar success, and Ball has gone down in history as one of the funniest actresses of all time.

The award for most prominent and respected Hollywood redhead would go to Nicole Kidman (if such award existed). From Moulin Rouge to Eyes Wide Shut, Nicole has done it all. With an unprecedented longevity in the industry, the elegant actress is also known as one of Australia’s top imports. From down under to the top of Hollywood’s celebrity lists.