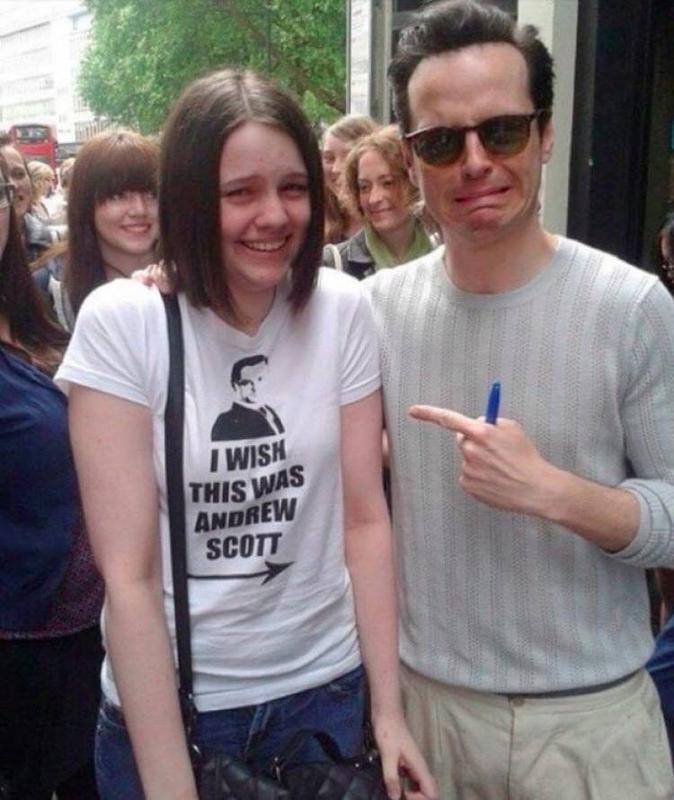 Everyone loves a good laugh, and sometimes, people can’t help but broadcast their senses of humor on the shirts they wear. Even celebrities sport this playful trend and wear some of the most hilarious, trendsetting statement tees around.

From funny quotes to TV and movie references, these celebrity statement t-shirts are guaranteed to make you want to buy one of your own!

When she was pregnant, Britney Spears wore this adorable tank top, which said “I have the golden ticket” and pointed to her stomach..

With this shirt, Jake Gyllenhaal makes a point to expresses his support to the gay community in the wittiest way ever. Reminiscing on his gay cowboy role in Brokeback Mountain, his shirt exclaims, “I was a gay cowboy before it was cool!”

Kit Harington paid homage to his award-winning show when he sported this North Face knock-off shirt with a fun twist on the logo. For a show as downright thrilling as Game of Thrones, it’s surely hard to forget.

We’ve all seen how convincing Tom Felton and Rupert Grint’s portrayal of enemies in Harry Potter was, but that’s just not the case in real life. As proof, here’s Rupert’s heartfelt confession of admiration of his co-star. Isn’t it adorable?

Ryan Gosling and Macaulay Culkin are friendship goals! They definitely set the bar high when they both decided to wear shirts featuring each other’s faces.

Veteran talk show host Kelly Rippa has been married to Riverdale actor Mark Consuelos since 1996. From what we see, she’s still head over heels in love, especially after posing with this shirt featuring photos of her husband’s head.

Couple shirts have become one of the most popular ways to show off being in a relationship. Modern Family actress Sarah Hyland and Bachelor in Paradise star Wells Adams did not shy away from showing theirs, which were both cute and witty.

How cute is this selfie of Major League Baseball player Justin Verlander beside a clueless fan? We bet the boy is as shocked and delighted as Verlander. What a lucky fan!

They say manifesting is one of the best ways to have make your dreams come true, and this guy did just that. Written out in specifics, this shirt helped this guy meet Stephen Spielberg in real life!

It’s one thing to meet your favorite celebrity, but to meet them while wearing a shirt that displays their face is entirely different. We’d like to think this fan wished for the groundhog day to keep this moment on loop, but at least it happened.

Living Up To Standards

This little boy had his standards set sky high when he decided to wear this shirt. He’s definitely living up to its text in this photo, as he’s pictured alongside Victoria’s Secret Angel, Rosie Huntington-Whiteley.

Actor Josh Peck is best known for playing Josh Nichols on the sitcom Drake & Josh. We bet this moment was an unforgettable throwback for both Peck and his fan.

This fan had the best timing in sporting his Hodor shirt. Kristian Nairn, most popular for his portrayal of Hodor in Game of Thrones, granted this fan a special moment of meet-and-greet.

This fan had one wish, and that was to meet actor Andrew Scott, best known for playing Jim Moriarty in the BBC series Sherlock alongside Benedict Cumberbatch. Whether it’s fate or the shirt, her wish came true.

Through Thick and Thin

Real talk: no matter how many fights you get into with your sibling, you will always have each other’s back. With Kourtney Kardashian’s shirt, it’s clear she lives by the same principle.

For whatever reason, Madonna proudly claims to be in a cult, according to her shirt. While we don’t know how accurate it is, we believe she meant to encourage everyone to celebrate their identity regardless of which organization they belong to.

It is no joke to run a fashion empire, and Victoria Beckham is dead serious about it. She’s so stern about it, that she literally became an embodiment of what her shirt says.

For all the guys trying to hit on her, Gigi Hadid had a simple message: don’t even try if you don’t wanna be compared to Zayn Malik.

While twerking involves provocative gestures, Cara Delevingne won’t accept the public’s critique of the dance. After all, it is a kind of modern dance and should only be seen that way, according to her shirt.

Samuel L. Jackson surely found the humor in wearing a t-shirt with two of his faces on it. The only thing missing are his glasses, but it’s still easy to tell that it’s him picture on his shirt.

Into the Woods actor Billy Magnussen is the instant mood booster we all need in our lives. Just take a look at that wide smile matching his very own facial expression on his shirt. Who wouldn’t instantly laugh at that?

A Little Heads Up

The Struggle Is Real

As a famous public figure, Jessie J knew people would always have their eyes on her especially with her fashion. Well, we admire her honesty and cleverness for sporting this look.

It’s no secret that actress and comedian Aubrey Plaza is a huge fan of Nicholas Cage. So, when she wore this t-shirt of his face zoomed in, her obsession only became more obvious and hilarious.

Rita Ora’s shirt has a bit of a deeper meaning than the rest on our list. Although her shirt isn’t talking about literal burning bridges, it’s likely referring to broken relationships that can actually pave the way to better ones.