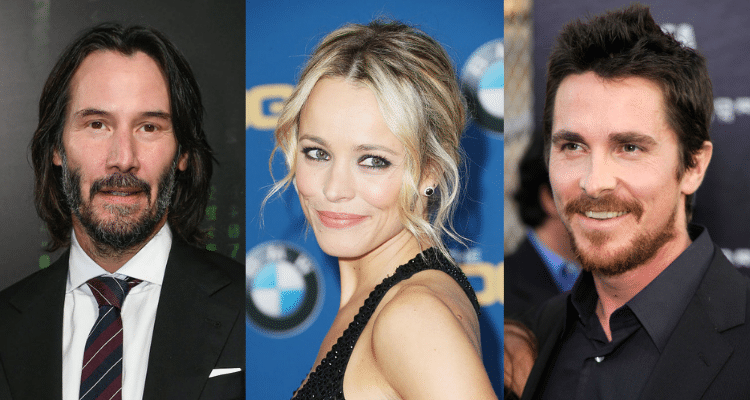 It happens more often than you’d think. You’re watching an interview with your favorite celeb, and suddenly they’re talking in a strange accent and it hits you: wait, they aren’t American?! One great talent many actors possess is convincing us that they’re from the United States, when in fact they might have been born in the UK, Canada, or even New Zealand. Despite our collective disbelief, these are the stars we all forget aren’t American.

Wisecracking actor Ryan Reynolds may have the biting wit associated with the average, ironic American, yet he was born in Vancouver, British Columbia, and didn’t move to the States until his early twenties. Reynolds is known for a number of rom-com films such as The Proposal and Definitely, Maybe. He also has lead roles in The Hitman’s Bodyguard and Deadpool franchises.

Sandra Oh is from Ontario, Canada

Born to Korean parents in Nepean, Ontario (a suburb of Ottawa), actress Sandra Oh grew up in Canada and attended the National Theatre School in Montreal. Oh is best known for her TV roles such as Dr. Cristina Yang in Grey’s Anatomy, and Eve Polastri in Killing Eve. Her film career includes movies such as Sideways and Under the Tuscan Sun.

Hugh Jackman is an Aussie

While you can hear the actor’s authentic Australian accent in none other than the aptly named 2008 epic film Australia, most people know Jackman for his American accent, used in films such as The Greatest Showman, Real Steel, and the X-Men franchise. Though technically in the X-Men universe, Jackman’s Wolverine character is originally from Canada and later becomes an American citizen.

Charlize Theron is from South Africa

Actress and producer Charlize Theron was born in Benoni, South Africa, and moved to the United States to pursue acting in her early twenties. Theron is known for several action-heavy roles such as Atomic Blonde and Mad Max: Fury Road, in addition to movies such as Tully, Hancock, and Snow White and the Huntsman.

Keanu Reeves was born in Lebanon and raised in Canada

Canadian actor Keanu Reeves was born in Beirut, Lebanon, and raised in Toronto, Canada, where he took up drama and ice hockey in school. From The Matrix, John Wick, and Bill & Ted franchises to individual films such as Speed and Point Break, Reeves is a well-rounded star currently living in Los Angeles.

Dev Patel is neither Indian nor American

Despite many of his Indian roles to date, ranging from Slumdog Millionaire to Hotel Mumbai and The Best Exotic Marigold Hotel, Dev Patel was actually born and raised in the United Kingdom. Patel’s parents are of Gujarati Indian descent, though before moving to England they were both originally from Naoribi, Kenya. Films featuring Patel’s natural English accent include The Green Knight and The Personal History of David Copperfield.

Cate Blanchett is from Melbourne, Australia

Interestingly enough, despite growing up in Victoria, Australia, many of actress Cate Blanchett’s starring roles feature her sporting a British accent. Some of Blancett’s notable films include Elizabeth, Blue Jasmine, and Ocean’s Eight. Additional roles include Galadriel, the elf queen in The Lord of the Rings franchise, and Hela, the goddess of death in Thor: Ragnarok.

Originally from Scarborough, Ontario, Canadian actor and comedian Mike Myers has been entertaining Americans and the rest of the world since he joined the cast of Saturday Night Live in the late eighties. His film career includes the Austin Powers and Wayne’s World franchises, in addition to other movies such as Terminal and Bohemian Rhapsody. He also voices everyone’s favorite animated ogre in the Shrek films.

Gemma Chan is from the UK

Born and raised in London, England, British actress Gemma Chan’s career started to take off with roles in TV series like Secret Diary of a Call Girl and AMC’s Humans. Chan is also known for her film work, including leading roles as Astrid Young in Crazy Rich Asians, and Sersi in Marvel’s Eternals. She also voices Namaari, one of the main characters in Disney’s Raya and the Last Dragon.

Drake is from Toronto, Canada

Originally from Toronto, Canada, Drake’s ascent to fame started when he played the Toronto-born teen Jimmy Brooks on the hit TV show, Degrassi: The Next Generation. While acting, Drake began to focus more on his music, eventually becoming the award-winning, Hotline Bling rapper, singer, and songwriter we know today.

Despite being best known for playing your friendly neighborhood Spider-Man in the Marvel Cinematic Universe, actor Tom Holland isn’t from Queens, but instead Surrey in the UK. Holland is so accustomed to speaking in an American accent for films ranging from Chaos Walking and the Spider-Man franchise to Uncharted, that he is known to slip out of his native English accent and into his American one during interviews.

Originally from Hamilton, Ontario, Canadian actor and comedian Eugene Levy is best known for his roles in classic American comedies like Best in Show and the American Pie films. Levy’s popular TV series, Schitt’s Creek, which he co-created, co-starred, and co-produced, was also filmed in Canada, though whether the fictional town is actually set in the US or Canada has been left intentionally vague for the viewers’ imaginations.

Lupita Nyong’o was born in Mexico and raised in Kenya

Oscar-winning actress Lupita Nyong’o was born in Mexico City, and then raised in her parents’ home country of Kenya, later attending the Yale School of Drama. Nyong’o’s films include Us, 12 Years a Slave, The 355, Queen of Katwe, and Black Panther. She also voices Maz Kanata in the Star Wars sequels.

He may have played Batman/Bruce Wayne in Christopher Nolan’s acclaimed Dark Knight trilogy, but fans often forget that actor Christian Bale is in fact British. Bale was born in Haverfordwest, UK, and moved to the United States in his teens. Many of his films, including American Psycho, Vice, American Hustle, and The Big Short, feature his perfected American accent. However, you can hear Bale’s real Brummie British accent in the film Ford v Ferrari.

Born in Alberta, Canada, and raised in British Columbia, Canadian actress Evangeline Lilly modeled in her teens to help pay for her tuition at the University of British Columbia. Lilly is known for playing Kate in the TV series Lost, in addition to starring in The Hobbit trilogy, Ant-Man, and Ant-Man and the Wasp.

Justin Bieber is from Ontario, Canada

Before he came to America and signed his first record deal, singer Justin Bieber was a young Canadian teen born and raised in Ontario. The former teen sensation and Grammy winner is known for several hit songs, including Baby, Sorry, Never Say Never, and As Long as You Love Me. Bieber and his wife Hailey currently own homes in both California and Canada.

Born in Oxford, England, actor and comedian Hugh Laurie was educated at Eton and Cambridge. Laurie is best known for his role in House, the 8-season, Emmy-winning series where he stars as a doctor with an astoundingly authentic American accent. Laurie’s other roles featuring his American accent include the TV series Veep and the Stuart Little franchise. You can hear his actual British accent in the live-action 101 Dalmations film.

Mena Massoud was born in Egypt and raised in Canada

Born in Cario, Egypt, actor and singer Mena Massoud moved to Canada with his family when he was just three years old. Massoud is best known for playing the lead role in Disney’s 2019 live-action Aladdin remake. He also has roles in the Hulu original series Reprisal and the Amazon Prime series Tom Clancy’s Jack Ryan.

Born and raised in London, England, actor Robert Pattinson has joined fellow actor Christian Bale on the very short list of Brits who’ve played Batman/Bruce Wayne. Though Pattinson did use his natural English accent as Cedric Diggory in Harry Potter and the Goblet of Fire, most fans know him as the American vampire Edward Cullen in The Twilight Saga films.

Nina Dobrev was born in Bulgaria and raised in Canada

Born in Sofia, Bulgaria, Canadian actress Nina Dobrev moved with her family to Toronto when she was just two years old. Dobrev’s acting career started taking off after appearing in Degrassi: The Next Generation, and she’d later go on to star as Elena Gilbert in The CW hit TV series, The Vampire Diaries.

KJ Apa is from New Zealand

Born and raised in Auckland, New Zealand, actor and singer KJ Apa started his career with the New Zealand soap opera, Shortland Street. Apa is best known for playing Archie Andrews in the CW series Riverdale, which is based on the Archie Comics. He has also acted in a number of films including A Dog’s Purpose, The Hate U Give, and I Still Believe.

Carrie-Anne Moss is from Vancouver, Canada

Canadian actress Carrie-Anne Moss is originally from Vancouver, British Columbia, and worked as a model in her 20s before landing the role of Trinity in The Matrix franchise. Moss’ other films include Memento and Chocolat, and she has starred in the recurring role of Jeri Hogarth in the Marvel Netflix shows Jessica Jones, Daredevil, Iron Fist, and The Defenders.

John Boyega was born and raised in London, England

Though both Star Wars actors John Boyega and Daisy Ridley are from the UK, only Ridley kept her English accent in the sequel trilogy, while Boyega sported an impressively authetic American accent as the defected-stormtropper-turned-resistance-member Finn. Boyega’s other films include The Circle, Attack the Block, and Pacific Rim: Uprising.

Though Marvel fans probably associate actor Chris Hemsworth with his trademark English accent used when playing Thor, the god of thunder, Hemsworth is originally from Melbourne, Australia. One of Hemsworth’s initial acting roles was in the Australian soap Home and Away. His other works include the films Rush, 12 Strong, and Snow White and the Huntsman.

Though the Baywatch star seemed born to run in slow motion on sunny, sandy beaches, in reality, actress and model Pamela Anderson was born in the northern Canadian town of Ladysmith, British Columbia. Anderson would spend her childhood in Vancouver before moving to LA in the 90s to start her acting and modeling career.

Margot Robbie is from Queensland, Australia

Margot Robbie may seem like the gorgeous American girl next door, but in reality, she’s originally from the Gold Coast of Australia. Most fans admire Robbie’s impressive knack for an American accent in films like The Wolf of Wall Street, Focus, and the cartoony version used when she’s playing Harley Quinn in the DC Comics films. One of the films featuring Robbie’s actual Australian accent is during her cameo in The Big Short.