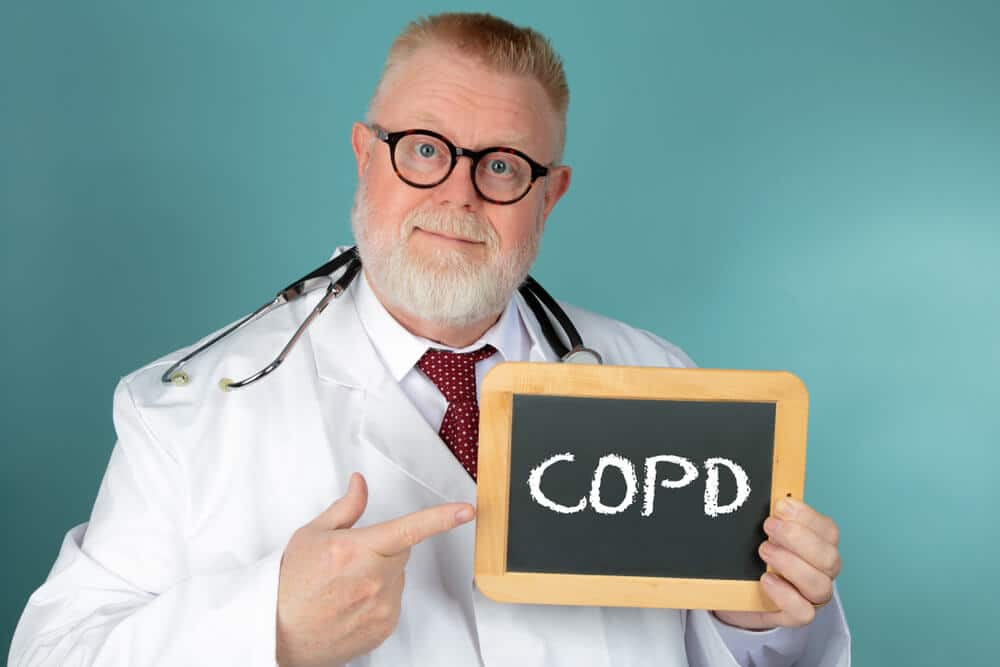 It is estimated that more than 16 million people are living with COPD (chronic obstructive pulmonary disease) in the United States. Unfortunately, approximately 40,000 out of every 100,000 deaths in the United States are associated with COPD, making the disease the fourth leading cause of death in the country; it is also the fourth-most prevalent cause of disability there, too.

The financial costs are great as well. In fact, estimated healthcare expenses associated with the disease cost the United States approximately $50 billion each year.

Yet, as common and as devastating as the condition is, most people don’t understand what COPD is and why this largely preventable condition kills so many people each year. So, gaining an understanding about what COPD is and how it manifests is the first step in managing it or even preventing it.

Generally, when people think about COPD, they think of it as one disease. COPD is actually a combination of diseases, however, which work together to obstruct airflow. The result is that it is much harder for people with the condition to breathe.

What are the signs of COPD?

There are four stages of COPD, ranging from mild to severe. How fast the disease progresses is dependent upon the person and the way they manage the disease after they receive a diagnosis. The first stage of COPD is Stage 1, or Mild COPD. Many people who are in this stage may not even be aware that they have the condition.

So, just what are the symptoms of this condition?…

People in the early stages of COPD may notice that they have a cough that just won’t go away on its own. Now, a cough that has endured longer than two months is considered chronic, which can indicate that a doctor’s visit is in order.

How does it develop?

Coughing is a mechanism for the body to protect itself from irritants that people breathe in. In other words, coughing helps the body clear itself of mucus or phlegm (which trap contaminants and irritants).

Commonly, coughing can be a reaction to environmental pollutants, such as chemicals or dust in the air. Cigarette smoke or other types of smoke can also cause coughing episodes.

People generally describe their cough as one that is coming from deep within the chest.

Of course, people who progress to the next stage of this condition can experience more advanced (and debilitating symptoms)…

8. Chronic Bronchitis and an Increase in Mucus Production

People who are in Stage 2, or Moderate Stage COPD, begin to see an increase in mucus production and that their cough becomes more frequent.

Now, medical practitioners describe the increase in the production of mucus using three terms: chronic sputum production, chronic mucus hypersecretion, and chronic bronchitis. The latter of these conditions can indicate COPD; a chronic cough which produces mucus at a minimum of 3 months in a row for 2 years is what doctors classify as chronic bronchitis.

How does it happen?

The increase in mucus results from COPD-related damage to the ciliated epithelium (thin tissues with tiny “hairs,” or cilia). When damaged, the cilia are unable to clear excess mucus, leading to buildup.

People may notice that their coughing episodes are more significant during the morning hours. It is possible that people may have a nagging cough with or without phlegm.

The mucus could appear colorless, or it could contain hues of white, yellow, or even green.

Now, the following sign of COPD can show up both in earlier or later stages of the disease…

Some people in the earliest stage of COPD notice that their breathing is slightly altered. As the disease progresses, breathing becomes even more difficult. When a person feels like they can’t get enough air, they are experiencing a shortness of breath known as dyspnea, the medical term for breathlessness.

Dyspnea occurs when air has difficulty traveling in and out of the lungs.

Most people notice that they are more winded than usual after completing some form of exercise. In the first stage of COPD, it’s common not to exhibit symptoms that are advanced enough to prevent daily activities. As the disease progresses, people find that it takes a significant amount of effort to breathe. They may gasp for air and have a heavy feeling in their chests.

People who are in Stage 2 specifically may notice that completing tasks is more difficult. Wheezing may occur during flare-ups and after exercise. Some people may simply find that they get tired a lot easier than normal. As the disease progresses to Stages 3 and 4, a person will have an even more difficult time completing tasks, and their ability to engage in normal activities are limited.

COPD or something else?

Shortness of breath and difficulty breathing alone are not sure signs of COPD, which is why a doctor’s visit is necessary in order to receive an accurate diagnosis. When looking at symptoms alone, COPD identification is much easier when the previously mentioned symptoms are paired with some of the following signs…

Sleep disturbances can occur at any stage of COPD; however, these disturbances are not as apparent in the earlier stages of the disease as they are in the latter ones. Most commonly, though, people begin to develop sleep disturbances in Stage 2.

COPD-related sleep disturbances result from the reduction of oxygen in the blood. Why the loss of oxygen? Breathing-pattern changes from COPD. Unfortunately, these changes can exacerbate other symptoms of the condition as well.

Medications used to treat COPD also cause people to have sleeping issues.

People with COPD see a reduction in the quality of sleep they get at night or may even experience insomnia. As the disease progresses, people tend to wake up frequently throughout the night and often fail to enter REM sleep, a restorative stage of sleep.

There are dangerous consequences of disturbed sleep.

Importantly, an inability to get adequate sleep reduces the body’s ability to function and heal properly. Sleep deprivation can also interfere with a person’s cognitive abilities, which can have an impact on their ability to think, reason, make decisions, problem-solve, and remember things.

People who have COPD are also prone to developing sleep apnea, where breathing randomly starts and stops throughout the night. Sleep apnea can be fatal in some cases.

Unfortunately, it isn’t uncommon for physicians to overlook sleep disturbances or the following symptom…

People should be aware that a diagnosis of COPD is only the beginning; there are a host of complications associated with the condition, including mental illness.

A large amount of those diagnosed with COPD will have issues with anxiety and depression. As COPD progresses, the symptoms will become more pronounced. Conversely, COPD attacks are also more prevalent in people who suffer with depression. Often, mental health conditions occur during the latter stages of COPD.

How does it happen?

Proper breathing—and proper amounts of oxygen to the body—is important for overall body function and basic mental health. So, COPD-related breathing difficulties can contribute to mental illnesses like anxiety.

People who have COPD should not ignore any feelings associated with anxiety or depression they’ve had for two consecutive days. These conditions can cause other symptoms associated with COPD to worsen, aiding in the progression of the disease.

People should therefore take note of common symptoms of mental illness, like:

4. Infections of the Lungs

An infection of the lungs is a common complication associated with COPD, and it can happen at any stage.

Pneumonia: What does it feel like and what can it lead to?

Pneumonia is quite common in those with this disease. In fact, studies have found that seniors who have COPD are six times more likely to develop pneumonia than those who don’t have the disease. The severity of pneumonia in people with COPD can’t be understated, as it can lead to life-threatening conditions like respiratory failure and sepsis.

People should look for symptoms associated with pneumonia, such as:

Acute Respiratory Distress Syndrome (ARDS): How does it happen and what does it feel like?

Another condition commonly associated with COPD is acute respiratory distress syndrome (ARDS). This condition is often the by-product of pneumonia and causes significant inflammation in the lungs. Unfortunately, it can be life-threatening as it causes fluid to infiltrate blood vessels in the airways. In fact, the rate of death for those who have COPD and develop ARDS is higher than those who don’t have the disease.

People should be on the lookout for signs of this condition, like:

During later stages of COPD, the cardiovascular system can be affected.

People with COPD should be aware that their risk of death due to a heart attack, arrhythmia, and congestive heart failure is higher than in people who don’t have the disease.

Some specific cardiovascular conditions associated with COPD include, but are not limited to, the following:

Flare-ups can occur at any stage, although people commonly begin to experience them in Stage 2. What is a flare-up? A flare-up is defined as the worsening of symptoms for several consecutive days. These periods can lead to serious medical complications, so it is important for people to be able to recognize when they are in one.

The following symptoms may indicate a flare-up:

People can mitigate their risks of getting COPD by eliminating the risk factors they have control over, like staying away from cigarette smoke and protecting themselves from environmental irritants and pollutants.

So, for example, people who work in facilities where they are exposed to chemicals should wear proper PPE (personal protection equipment) at all times. People who already have COPD should avoid extreme temperatures. After all, weather that is either too hot or too cold can exacerbate symptoms.

Being self-aware is key.

People should note how they feel on a day-to-day basis, as this will help them recognize when there are changes in their condition. Some people find it helpful to keep a diary to help them track and therefore manage their symptoms. This tactic can be particularly useful when flare-ups occur.

What’s most important to remember is that the key to living with COPD is understanding how the disease affects the body, and learning to recognize when medical intervention is necessary.

Celeb Facts - Celebrity Kitchens To Inspire Your Next Remodel