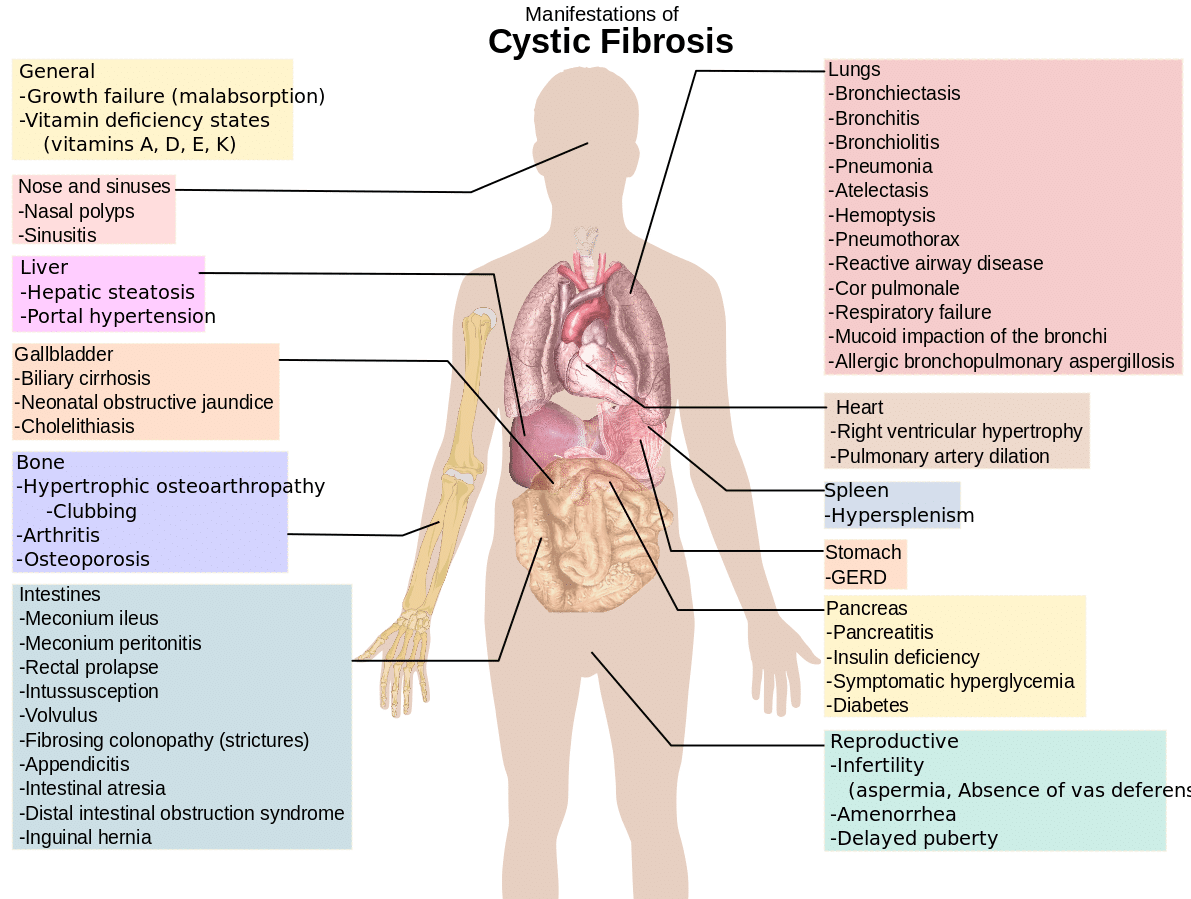 What Is Cystic Fibrosis? Who Gets CF?

In the United States, an estimated 30,000 people have been diagnosed with cystic fibrosis (CF), according to the Cystic Fibrosis Foundation. CF is classified as an autosomal recessive disorder. This simply means that for the disease to develop, two copies of the abnormal gene are necessary. When two people who are genetic CF carriers conceive a child, there is a 25 percent chance of the child having the disease. It is estimated that more than 1,800 CF mutations exist, according to an excerpt published on ScienceDirect.

What Does CF Do?

CF causes damage to the cells responsible for producing sweat, mucus, and digestive juices. This results in the accumulation of a sticky, thick mucus in the pancreas, lungs, and other organs. The mucus can trap bacteria and obstruct airways, which can cause lung damage and frequent lung infections. Over time, patients may experience respiratory failure.

Within the pancreas, the accumulation of mucus inhibits digestive enzyme release. This makes it much harder for the body to absorb critical nutrients and break down the food the patient eats.

Newborn babies are routinely screened for this condition in the United States. Adults and older children can also be tested if they start to display CF symptoms, however. This typically involves a sweat test and genetic testing.

Symdeko – This is an oral medication prescribed to patients age 12 and older. This drug focuses on CFTR protein defects and strives to essentially correct them. This can help create a better balance of water and salt in the lungs, making it easier to breathe due to less mucus accumulation.

Kalydeco – This is a targeted CF drug designed for those with specific CFTR gene mutations. This accounts for approximately four to five percent of patients with cystic fibrosis. This medication allows more time for chloride ions to get out of cells and into them. This helps to ensure a better balance of water and salt in the lungs. This helps to reduce mucus accumulation in the lungs so that patients may breathe easier. Patients who are at least two years old may be prescribed this drug.

Pulmozyme – This drug works like a type of synthetic protein to break down the pulmonary secretion’s excess DNA in CF patients. By thinning these secretions, patients can be put at a lower risk for lung infections and may able to breathe easier. CF patients who are at least five years old may be prescribed this drug. Efficacy and safety is still being tested in patients under five.

The list price is $4,096 monthly. Coupons can cut this cost to $3,432. The official Pulmozyme site also offers discounts for eligible individuals via a Co-pay Card Program, and can cover up to $10,000 per year after certain conditions are met.

Orkambi – This drug may be prescribed to those with CF age two and older. This drug is designed for those with specific gene mutations associated with CF. The purpose of this medication is to target the underlying cause of this condition. The goal is to correct the CFTR proteins that are defective to help to reduce how much mucus is produced.

The list price is $30,695.75 monthly. Coupons can reduce this cost to $20,781.35. The HealthWell Foundation Copay Program offer discounts for those who meet its requirements.

Creon – This drug contains three pancreatic enzymes, including protease, lipase, and amylase. They play an integral role in protein, sugar, and fat digestion. When the pancreas of CF patients is not producing sufficient amounts of these enzymes, this drug may be prescribed to help replace them. This is an oral medication that should be taken with food.

The average retail price is $661.70 monthly. Coupons can cut this price to $518.97. Those with commercial prescription insurance coverage may qualify for a copay card that could bring the cost of this drug to as low as $5 per month, once certain conditions are met.

Cayston – This drug is an antibiotic that is prescribed when patients have bacterial infections that are considered to be life-threatening or severe. It is an inhaled medication that kills the bacteria while helping to improve breathing. Patients age seven and older can use this medication.

This article should not replace the advice of a licensed medical professional. Only a doctor should diagnose a condition and create a treatment plan.