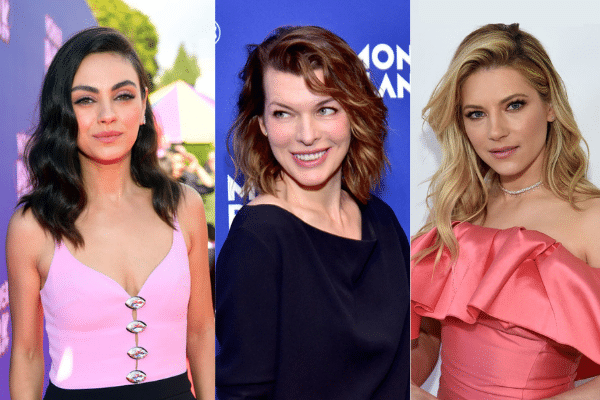 It’s not every day that you meet a famous Ukrainian, yet Europe’s second-largest country has quite a few amazing people that call the nation home. Whether they were originally born there, or have clear Ukrainian roots, these are some of the top famous people from Ukraine.

The late and great Star Trek actor Leonard Nimoy was born in Boston, MA, to Ukrainian Jewish parents. Nimoy is best known for playing the half-human, half-Vulcan Mr. Spock in the original Star Trek series, as well as in subsequent films and spinoffs. Throughout his life, Nimoy also worked as an author, film director, singer, and photographer.

Best known for her roles in films like Heathers and Little Women, actress Winona Ryder is of Ukrainian descent, with grandparents who immigrated to the US from Kharkiv, Ukraine. Ryder’s other films include Beetlejuice and Edward Scissorhands, and she also stars in the hit Netflix original series Stranger Things.

As one of the biggest names in Hollywood, we have director, producer, and screenwriter Steven Spielberg to thank for many notable films such as Jaws, Indiana Jones, Jurassic Park, Saving Private Ryan, and many more. While Spielberg himself was born in Cincinnati, Ohio, his Jewish grandparents came to the United States from Ukraine in the 1900s. With his family having lost several relatives in Poland and Ukraine during the Holocaust, Spielberg took great care when directing and producing Schindler’s List.

Born and raised in a Ukrainian American community in New Jersey, actress Vera Farmiga learned English at age six and was a Ukrainian folk dancer in her teens. Her film work includes Up in the Air (for which she was Oscar-nominated for best-supporting actress) and The Conjuring franchise, while her TV work includes Bates Motel and the Disney+ original series Hawkeye.

Canadian-born actress Katheryn Winnick is of Ukrainian descent. Winnick cites Ukrainian as her first language and that she didn’t start learning English until she was eight years old. Winnick is best known for her role as Lagertha on the hit TV series Vikings. She also stars in the ABC crime drama Big Sky.

Ukrainian-born model and actress Milla Jovovich was born in Kyiv, and then moved to London and later California during her childhood. In addition to films such as The Fifth Element, Ultraviolet, and Monster Hunter, Jovovich is best known for her starring role as Alice in the Resident Evil franchise.

Oscar-winning actor Leonardo DiCaprio’s grandma was born in Ukraine in 1915, though at the time the country was under the domain of the Russian Empire. DiCaprio’s grandmother emigrated to Germany during her childhood and this was where Leonardo’s mother was born. DiCaprio is widely regarded as one of Hollywood’s most talented stars, with an impressive resume of films including Titanic, Inception, The Wolf of Wall Street, and The Revenant.

Former That ’70s Show star Mila Kunis was born in Chernivtsi, Ukraine, and moved to the United States with her family during her childhood. As an actress, Kunis has started in several films including Black Swan, Jupiter Ascending, and the Bad Moms franchise. Kunis also voices Meg on Family Guy.