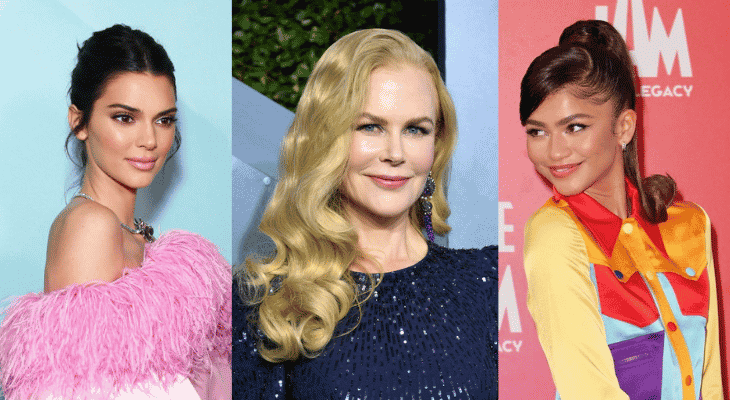 People typically look up to celebrities due to their talents. Yet for a number of female celebs taller than most men, people actually have to look up to them! With the average male reaching heights of 5′ 7″ to 5′ 9″, and the average woman at 5′ 4″, these towering famous women truly stand out.

From runway models and movie stars to Game of Thrones cast members, these lofty, legendary ladies don’t need high heels to stand out in a crowd.

Yep, Taylor Swift is 5′ 11″. Who knew that in addition to topping charts, this singer-songwriter superstar is taller than the good majority of her fans? From Shake It Off to Love Story, Blank Space, and Bad Blood, Swift is sure to stay at the top of the music industry in both talent and stature.

Supermodels are typically taller than the average person, and then there’s Karlie Kloss at 6′ 1 1/2″ (the average female model is a couple inches shorter at 5′ 9″). The former Victoria’s Secret Angel has served as a brand ambassador for companies such as Coach, Nike, and Dior, and has been a host and an executive producer for Project Runway.

Standing at 5′ 10″ is Tyra Banks, the larger than life supermodel-turned-star known for films like Coyote Ugly and Life-Size. Banks’ other onscreen projects include serving as creator, executive producer, and judge on America’s Next Top Model, and hosting Dancing with the Stars as well as her own talk show, The Tyra Banks Show.

Brazilian-born model Gisele Bündchen is 5′ 11″ and has graced the covers of Elle, Cosmopolitan, Forbes, and many more. Though her work typically stays in magazines or on the runway, Bündchen has also starred in a couple of films including Taxi and The Devil Wears Prada (where she notably cameos as a fashion magazine employee instead of a model).

At 5 feet and almost 11 inches, Karen Gillan is perhaps the tallest redhead around. The Scottish actress is best known for her roles as Nebula in The Guardians of the Galaxy, Ruby Roundhouse in the Jumanji franchise, and Amy Pond in Doctor Who. Some of Gillan’s other projects include the film Gunpowder Milkshake, and her beloved, yet short lived sitcom Selfie.

At 5′ 9″, Gemma Chan is a rising, radiant Hollywood star with one of her breakout roles as Anita/Mia in the AMC sci-fi series Humans. From playing Sersi in Marvel’s Eternals to Astrid Young in Crazy Rich Asians, Chan is gracing the silver screen more and more.

This just in: Gossip Girl star Blake Lively is 5′ 10″. As an actress, Lively is known for several films, including A Simple Favor, The Shallows, Green Lantern, The Age of Adaline, and The Sisterhood of the Traveling Pants. Carrying over from her Gossip Girl days, Lively is also known for many glamorous looks both on and off the red carpet.

Standing at exactly 6 feet tall, actress and comedian Aisha Tyler has already had quite the prolific career in Hollywood. Most know Tyler from her roles in Criminal Minds and Ghost Whisperer, while others might recognize her as the host for Whose Line Is It Anyway? Tyler also voices Lana Kane in the animated series Archer, co-hosted The Talk for two seasons, and directed her first film, Axis, which premiered in 2017.

Standing at 5′ 10″ is Gal Gadot, the former Miss Israel turned actress and model. Gadot has most notably played Amazon princess Diana aka Wonder Woman in the Wonder Woman and Justice League films. She has also starred in films such as Red Notice, the Fast and Furious franchise, and Death on the Nile.

Hollywood legend Brooke Shields is 6 feet tall. As an actress and model, Shields got her start in films like Pretty Baby, The Blue Lagoon, and Endless Love, as well as modeling for Calvin Klein jeans. Some of Shields’ more recent projects include voicing Mrs. Goodman in the TV series Mr. Pickles, and starring in the Netflix holiday film A Castle for Christmas.

There’s tall, and then there’s Gwendoline Christie at 6′ 3″. As one of the tallest female talents of Hollywood, Christine is best known for playing Brienne of Tarth in the HBO series Game of Thrones. Christine also played Captain Phasma in the Star Wars sequels, and Commander Lyme in The Hunger Games: Mockingjay – Part 2.

At 5′ 10″, rapper and actress Queen Latifah’s commanding presence is made that much more impressive by her tall frame. Sometimes referred to as hip-hop’s first lady, Latifah has starred in several successful films and TV shows in addition to her impressive music career. Her most popular shows include The Equalizer and Living Single, while some of her most-known films include Chicago, Hairspray, and Bringing Down the House.

Among the tallest sisters in the Kardashian-Jenner family, Khloé Kardashian stands at 5 feet and 9 inches tall. Apart from her time spent starring on the reality show Keeping Up with the Kardashians and later The Kardashians, Khloé is a successful model, media personality, and socialite.

Before becoming one of Hollywood’s favorite blondes, Cameron Diaz used her 5′ 8 1/2″ height to work as a model. Diaz later broke into acting with her role as Tina Carlyle on The Mask, which led her to additional acting projects ranging from There’s Something About Mary to Charlie’s Angels, Bad Teacher, and The Other Woman.

At 6 feet tall, Leslie Jones was one of the taller Saturday Night Live cast members during her five year stint on the show from 2014 to 2019. Jones has kept up with her comedic roots by starring in films such as Ghostbusters (the 2016 version) and Coming 2 America. She also currently hosts the Supermarket Sweep game show.

In addition to multiple chart-topping hits, Adele towers over several fellow singers with her 5′ 9″ frame. With fifteen Grammy Awards and counting, some of Adele’s most popular songs include Hello, Rolling in the Deep, and Someone Like You. She also sung the titular track for the 2012 James Bond film, Skyfall.

At 5 feet and 9 1/4 inches, model and TV personality Gigi Hadid had her first modeling gig at just two years old. Since then, Hadid has walked countless runways, become a spokesmodel for Maybelline, and even founded her own clothing line called Guest In Residence.

Six-foot-tall model and business women Kimora Lee Simmons has been involved in the fashion industry for over thirty years. Initially starting out as a model for Chanel at thirteen years old, Simmons would go on to model for fashion house such as Yves Saint Laurent before founding her own global brand, Baby Phat.

Who knew actress Sophie Turner was almost 5′ 9″? Best known for playing Sansa Stark in HBO’s Game of Thrones and Jean Grey in the X-Men prequel films, some of Turner’s more recent projects include the TV mini series The Staircase and the Netflix film Do Revenge.

At 5′ 11″, actress Uma Thurman is one of the tallest leading ladies in any of director Quentin Tarantino’s films. Among Thurman’s top films are the Kill Bill franchise and Pulp Fiction, though she also had a noteworthy performance as Poison Ivy in the film Batman & Robin. Thurman has also worked in Hollywood as a producer and fashion model.

Best known for playing Tahani Al-Jamil in The Good Place, actress Jameela Jamil stands at an impressive 5 feet and 10 and a half inches tall. Jamil hosts the TBS game show The Misery Index, and her additional acting work includes the Disney+ show She-Hulk: Attorney at Law, films such as Marry Me, and voicing Wonder Woman in the animated film DC League of Super-Pets.

At 5′ 9″, many people recognize Gwyneth Paltrow as an actress in films ranging from Shakespeare in Love and Emma to playing Pepper Potts in the Marvel Cinematic Universe. Others know that after the successful start of her acting career, Paltrow branched out into other projects, including being the founder and CEO of Goop, a popular wellness and lifestyle brand.

Jurassic Park legend Laura Dern stands at an impressive 5 feet and 10 and a half inches tall. Though not as towering as the dinosaurs she starred with on camera, this actress has had a number of successful projects throughout the years, including Star Wars: The Last Jedi, HBO’s Big Little Lies TV show, and Greta Gerwig’s Little Women.

At 5 feet and 9 and a half inches tall, singer and rapper Lizzo has become a hip hop sensation in recent years. Some of Lizzo’s biggest hits include Truth Hurts, Good as Hell, and About Damn Time. Lizzo is also a classically trained flutist, and often plays the flute during her concert performances.

Actress and singer Zendaya is 5′ 10″. The former Disney Channel star rose to fame in shows such as Shake It Up and K.C. Undercover. Her film work includes Dune, The Greatest Showman, and the Spider-Man franchise. Zendaya is also in HBO series Euphoria.

Actress and producer Nicole Kidman is 5′ 11″, and known for a number of films ranging from Moulin Rouge! and Cold Mountain to Eyes Wide Shut, Aquaman, and Being the Ricardos. Kidman has also done some TV show work, including the series Nine Perfect Strangers and Big Little Lies.

At 5 feet and 10 and a half inches, Kendall Jenner is one of the tallest women in the Kardashian-Jenner clan. As a model, socialite, and media personality, Jenner rose to fame through her family’s reality show, Keeping Up with the Kardashians, and later became a highly paid supermodel in her own right, modeling for Chanel, Vera Wang, Michael Kors, and many more. Jenner also has her own tequila company, 818 Tequila.