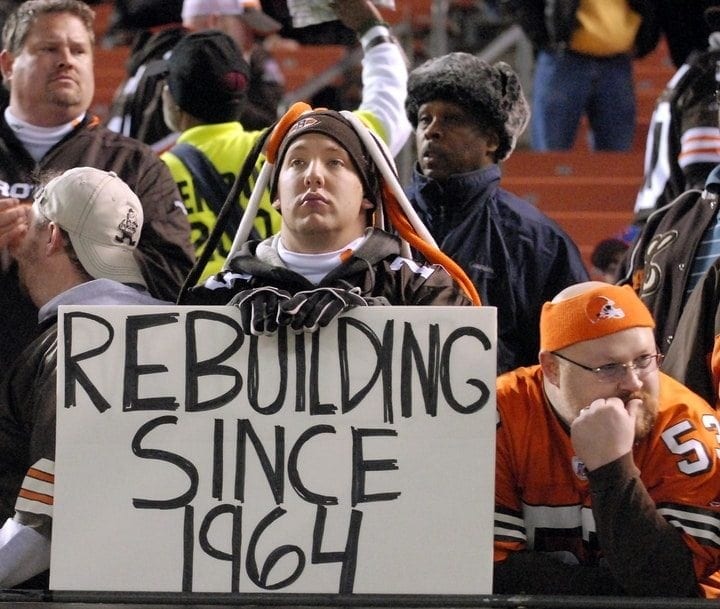 How else are you going to stand out in a crowd and be the real star of game day? All you need is some cardboard, a marker, a sense of humor, and a pair of . . .guts. Here are some hilarious game day signs we wish we thought of first!

Nice double team, ladies. We love it when a joke comes together.

That’s cold, man. She’s buying her own nachos next time.

This guy’s got a firm grasp on how to show the ladies he’s well-rounded. Take notes, single gentlemen.

Poor Hunter Pence has been the subject of hundreds of game-day signs. We like this one because the guy who made it is putting his money where his mouth is. Way to show up!

So, you have the poster board, the marker, and the will, but no ideas. We’ve been there, and we appreciate the effort!

How did this union even take place? How long will it last? Who has to sleep on the couch every Sunday night? So many questions . . .

The Gaunlet Has Been Thrown

This Dad knows how to motivate the next generation; with bribery, sadness, and a great sense of humor!

It’s good to have a goal, man.

Way to take an iconic line from The Office and turn it into a real-life roast. Well done. We applaud you, friend.

When you’ve got friends who will go the distance to speak up and stand out in a crowd, you’ve found a good thing. Someone buy these truth-tellers a beer; they’ve got more signs to make.

There’s always a bright side.

Nice shot across the bow, ma’am.

It’s good to remember where you came from so you don’t get too cocky.

A Healthy Dose of Disrespect

Boys will be boys.

Neither Rain Nor Snow

This flex is brought to you by puns and the letter L.

Way to turn that frown upside down!

Sometimes you just gotta look at yourself in the mirror.

Walked Right Into That One

We applaud the guys who took advantage of their tunnel seats.

When you’re making a list, and checking it twice, only to realize your team’s naughty, not nice.

When you’re a Broncos fan you have to make your own fun at the game . . .

So, this guy is sacrificing his flesh to the frigid air in Green Bay while his brother is chillin’ on the beach in CA. That’s some admirable joke completion right there.

When Two Wrongs Do Make a Right

If I were this kid’s parent I would tell him to go to his room. Since I’m not, way to stick it to the man, kid!

Ransom Note for the Win

This one is really clever! What it lacks in artistic flair it makes up for in messaging.

We love a clever sign maker. We also love not running for a good cause. Good work, ma’am.

What’s that old saying? “The enemy of my enemy is my friend.” At least we all have one thing in common with almost every other NFL fan in the country. Sorry, Tom.

This guy was fined so many times all he could afford was this small, orange sign.

Does This Make Me Look Fat?

This guy is all in on the joke! Our question is, did he buy the shirt specifically to make the joke, or is this one of his kids’ shirts that inspired the idea? Either way, hilarious!

At least both these cans enjoy the great weather while they watch cry in the stands.

What we love about this one is the commitment to the message–she’s wearing goggles. Point made, point taken.

Sometimes you have to leave the jokes behind and get straight to the point. This fan isn’t even asking for a playoff or a championship. Just a win. Even one will do.

This one took us a minute . . .the payoff was worth it.

Win or lose, you gotta Shake It Off. (See what we did there?)

What do the Church Lady from SNL and these fans have in common? . . .

Sometimes we have to choose between a strong GPA and going to all the big games. In the end, it’s a matter of priorities.

You know what that is? Loser talk.

With this kind of ingenuity and risk-taking, Bradley Drew is going far! Also, don’t forget to ask him how to spell, “You’re hired.”

This is an eye-catching game day sign. Well, done, fans.

Hunter Pence can’t seem to catch a break. But he’s good at catching balls; so much for breaks!

The funny thing is these guys anticipated they wouldn’t be able to feel their faces far enough out to make this sign . . . and they showed up anyway. These are true fans!

When You Want Attention But You Don’t Have Any Ideas . . .

She couldn’t have thought of any way to cheer on her team? Not even a “Go, team, go!”?

Between the Tooth Fairy, birthday gifts, and Christmas cash, this might be worth it.

A Message From Above

If Cameron Wake is God, then who is Morgan Freeman?

Is This a Compliment?

We’re not sure if this was a result of the rampant Kanya puns on Twitter, but we’re for it either way.

Great, now that song is in our heads. Also, we’re assuming they didn’t really get lost on the way to a Nickelback concert, but if they did, how old is this sign?

An All Around Sports Fan

This young man isn’t discriminating. He’s a sports fan, through and through. Don’t even challenge his love of sports–he’s got the sign to prove it.

We wonder if these ladies got confused when he knelt down during the game. He wasn’t proposing ladied. Better luck next time!