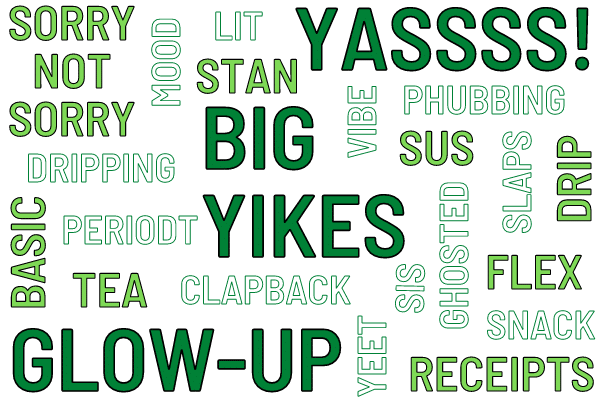 No matter how much we all attempt to keep up with the times, there’s always a new word or phrase being used by the younger generations. Millennials and Gen Z have their many quirks, and that includes some interesting new slang words. You’ve probably heard someone say “that slaps” or “big yikes,” but do you still have no idea what they’re talking about?

If you want to stay hip (keeping in mind no one really says “hip” anymore), these are some words and phrases you’ll need to know.

If someone has “drip” or “is dripping,” it means they are incredibly stylish, cool, and/or confident.

“That outfit is dripping.”

“He’s so cool and confident. Definitely has some drip.”

Asking for “receipts” is just asking for proof or evidence, or to call someone’s bluff.

“You said you didn’t text her? Let me see those receipts.”

To “phub” someone is to snub or ignore them by being on your phone.

“She was phubbing me all night on our date. I don’t even think she looked up at me once.”

You: “I just drove my car through my garage door.”

Similar to how a bodybuilder might flex their muscles to impress someone, to “flex” is to brag by showing off one’s status, wealth/possessions, or well-being.

“Look at her flexing so hard, sharing all those photos of her fancy new car.”

“No cap, that was the best pizza I’ve ever had.”

“Stop capping about your feelings. We know you like Becky.”

“Tea” (rarely spelled “T”) is just another word for gossip, whether it’s about someone you know or a random celebrity internet scandal. It’s most often used in phrases like “spill the tea” or “serve the tea,” usually meaning “give us the scoop” or “share the news.”

Her: “I missed last night’s party. Did I miss any tea?”

Her friend: “Absolutely. I have so much tea to spill.”

Everyone is a little basic here and there, but even if you are basic, you never, ever want to be called that because it’s an insult. If you’re basic, it means you’re interested in what’s mainstream and popular, often to the degree that you’re unoriginal and not unique in any defining way. Guys are referred to as basic bros, while girls are called basic b*tches.

“Grant is so basic. He and the last five guys I’ve met all have the same haircut.”

“Look at those basic b*tches all wearing UGG boots and talking about Starbucks and pumpkin spice.”

No, Millennials didn’t forget how to spell “yes.” It’s just that “YAS” conveys so much more enthusiasm, and the more S’s you add on the end, the more excited you are.

You: “YASSS they’re the best!”

To “yeet” is to throw something with a ton of force. You can also say yeet as a kind of exclamation or battle cry when you are yeeting something.

From fifteen feet away, David yeeted his trash into the garbage can as hard as he could.

David, while throwing the trash: “YEET!”

You know when you say “no offense, but…” and proceed to say something offensive? “Sorry not sorry” is pretty similar, as you’re apologizing but you don’t actually mean it.

“I’m just going to stay it: I don’t like Beyoncé. Sorry not sorry.”

If you’re a stan, you’re a super fan, obsessed and excessively enthusiastic about a sports team, celebrity, or movie/song/tv show. It can also be used as a verb meaning “to love, idolize, or support.”

“You’ve been to Graceland 10 times? You’re such an Elvis stan.”

A vibe is a distinct mood that you perceive radiating from a person, location, or experience. As a verb, to vibe means “to have a good time, usually by relaxing, hanging out, or listening to music.”

“I get a bad vibe about that old, abandoned house. I think it’s haunted.”

“We have snacks and some good tunes. We’re definitely going to be vibing tonight.”

Sus is just an abbreviated version of “suspicious” or “suspect.” It’s typically used to point out something that seems false or questionable.

When you’re ghosted, it means someone stopped talking to you, essentially disappearing without explanation or vanishing like a ghost. In most cases, it happens over text, especially between people who are flirting, though friends and family can also ghost each other.

“I got ghosted. We were texting nonstop for a couple of weeks, and then she just stopped talking to me one day.”

Short for sister, “sis” is a term of endearment for a close female friend.

As another way to say really, very, or truly, “highkey” is used to strongly emphasize your enjoyment or approval of something.

“I highkey love that purse. Where’d you buy it?”

“Fam” is short for family. While it can apply to actual relatives, it’s typically used to refer to close friends who are like family.

“Going to the mall with my fam today.”

A snack is someone you find attractive.

Sometimes a threat, sometimes a promise, if someone says “catch these hands,” they’re getting confrontational. Often it’s a warning that the person is getting ready to fight you, i.e., put their hands on you.

“You don’t want to catch these hands.”

“Lit” pretty much has the same meaning as if something were “fire” or “on fire.” If something’s lit, it’s cool, fun, and completely awesome.

“There’s an open bar and the bride and groom hired circus performers. This wedding is going to be so lit!”

“Dead” or “I’m dead” is a response when you’re laughing so hard, you could die. It can also mean you’re in huge trouble.

If a song is so good it makes you want to dance, it’s a bop. Similarly, if you’re bouncing and dancing around to music, you are bopping.

“This new song is such as bop.”

“Bet” is short for “you bet” and is a positive response meaning “yes, absolutely, or of course.”

You: “Are you coming to the barbecue this weekend?”

Very similar to how the word “period” is used to state something is final, “periodt” adds an extra bit of emphasis at the end of a statement when someone’s making a point.

“This is the best chocolate I’ve ever had, periodt.”

A clapback is just another word for a sassy comeback, quip, or retort.

The attempted insult: “You’re an idiot.”

The clapback: “And you would know from experience.”

If something “slaps” it’s not abusive, it’s amazing! Slaps is typically used to describe really amazing music, but can also be applied to something you’re obsessed with, like a favorite food or movie/book/tv show.

“This new song slaps! Turn it up.”

Unlike growing up during puberty, a glow-up can happen at any time. While it can be applied to mental and emotional improvements, most people use it to indicate that someone has made a positive, attractive change to their physical appearance. Common glow-ups include getting in shape, trying out a new wardrobe, and getting your teeth fixed.

“Wow, Stacy really had a glow-up! She looks so much better as a blonde.”

“Mood” means “I feel the same” or “that’s relatable/I can relate to that.” It is most often used to reply to someone stating a feeling, or seeing someone perform an action. “Big mood” is used when you especially relate to something.

Your friend: “I’m so tired I could lie down on the floor and sleep for a year.”

If something “hits different,” it stands out for being significant, unique, or better when compared to other things. It can also mean that while under various circumstances, something is perceived as better, worse, or just distinctly not the same.

“I’m not a big Madonna fan, but this one song of hers hits different.”