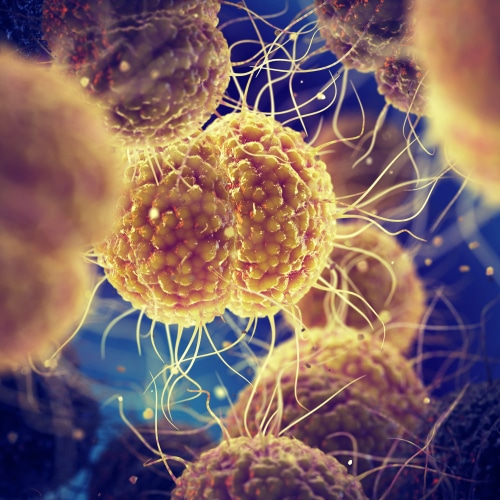 Gonorrhea is an infection caused by bacteria, transmitted through sexual contact and occasionally through sharing needles. This infection, commonly known as the clap, can be treated with antibiotics if it’s caught early enough. But if left untreated, gonorrhea can spread throughout your body, causing painful complications and infertility in men and women alike.

Gonorrhea can infect body parts that are not typically associated with STDs, such as the eyes and throat, read on to learn all of the symptoms of gonorrhea.

When the fallopian tubes are affected by gonorrhea, it can lead to pelvic inflammatory disease (or PID), which is when the pelvis gets inflamed. PID then causes fevers, cramping, pelvic pain, and potentially infertility.

Is pelvic pain an automatic symptom of an STD?

Not necessarily, as most cases of PID are not triggered by STDs, but by other causes. But if a woman with an asymptomatic STD neglects to get tested and treated, the infection may spread further and cause more visible conditions, such as PID.

For males, penile discharge is one of the prime symptoms for STDs like gonorrhea. A strange cloud-like discharge will often form at the tip of the penis, oftentimes with a mucus or pus-like texture and a yellowish color.

This symptom often appears two weeks after getting infected. But penile discharges are often accompanied by irritating or painful sensations…

Like chlamydia, gonorrhea can also cause epididymitis for men. Epididymitis is caused when the epididymis, the duct where sperm passes through to get to the vas deferens, becomes inflamed. As a result, either one of the testicles will feel swollen and increasingly sensitive, often causing pain at the slightest touch.

While vaginal discharge is normal, it becomes a problem when the color or texture changes. These changes are concerning especially if discharge starts to have a greenish or yellowish color and pus-like viscosity, as these are usually indicators of STDs like gonorrhea and even chlamydia.

Is it gonorrhea or something else?

Changes in vaginal discharge could indicate other problems, such as vaginosis, yeast infections, or even cervical cancer. So, it’s important to see your doctor, get tested, and receive necessary treatment.

Unfortunately, other uncomfortable symptoms can emerge, too…

Using the restroom will be more grueling for any infected person, regardless of their anatomy. Not only will they experience frequent urges to urinate, urinating will also become especially painful. Both symptoms, however, are also common with urinary tract infections, not just gonorrhea.

Is it gonorrhea or a UTI?

Gonorrhea and UTIs share many similar symptoms; the only way to be sure of what you have is to get tested by a licensed medical professional. Remember: anyone can get a UTI, regardless of biological sex.

Unfortunately, strange discharge does not only affect one sex…

STDs like gonorrhea cause vaginal tissues to become sensitive and inflamed. These events make sex particularly painful and, in turn, often cause mild to heavy bleeding after intercourse. Immediate medical help must be sought when this happens to evade possible complications.

Unfortunately, this symptom isn’t the only instance of pain associated with the clap…

Problems With The Rectum

While we typically think of STDs as localized in the pevlic and genital region, other parts of the body can develop gonorrhea, too…

Gonorrheal throat infections happen as a result of having oral sex with an infected partner. Its symptoms include a sore throat, a recurring redness around the throat, swollen lymph nodes in the neck, and fever.

Our penultimate symptom is definitely hard to miss…

Gonococcal conjunctivitis, or pinkeye, is contracted through contact of the eyes with infected genital secretions. It usually starts to manifest a few days after getting infected.

Our final symptom, however, is an unlikely consequence of gonorrhea…

Who knew that the clap could give you arthritis? This a rare complication of gonorrhea where tissues become inflamed. The affected areas will appear to be warm, red, swollen, and feel extremely painful during movement.

Gonococcal arthritis can affect the following parts of the body: