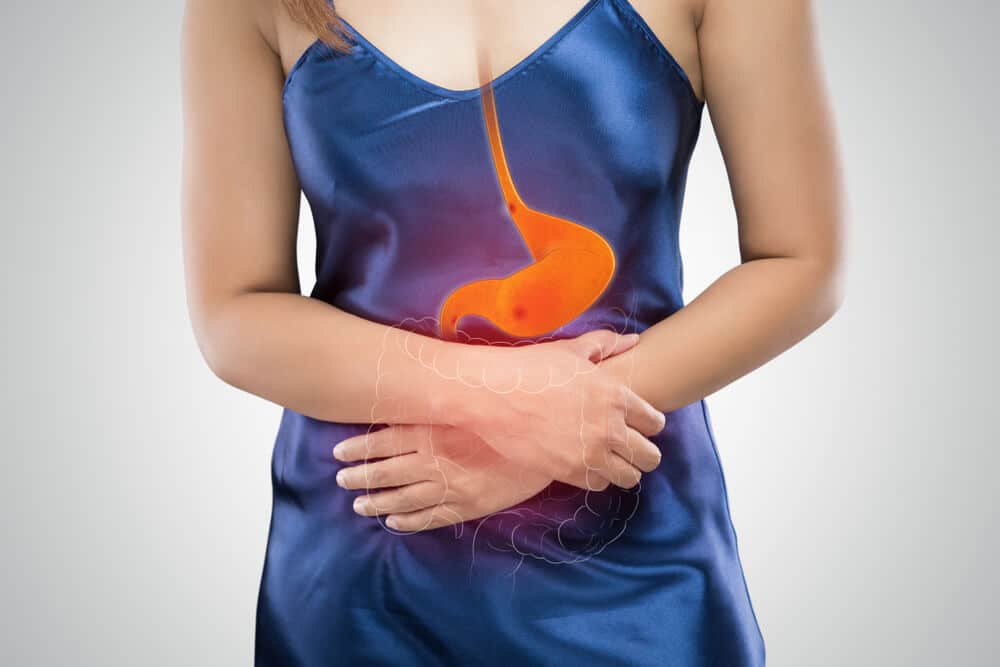 Ulcers affect millions of people in the United States each year, resulting in plenty of hospital visits. The best way to treat an ulcer? Identifying its root cause. In order to find that root cause though, you first have to identify the ulcer in the first place.

So, what exactly are ulcers, and what are the signs that someone may have one? The first symptom is by far the most noticeable…

Sharp pain may be present in some ulcer cases. Most of the time though, a blunt or dull ache in the abdominal region will plague the ulcer sufferer.

Dull stomach pain is an uncomfortable feeling that can appear anywhere between the belly and breastbone. It is not a piercing or sharp pain, but a constant discomfort that resembles a cramp.

When you suffer from an ulcer, the lining of your digestive tract is compromised. So, a stomachache is the body’s way of informing the nervous system (and you) that something is wrong.

The next symptom is one that’s a little trickier to spot, though…

Appetite loss is common when a medical condition interferes with the ability to comfortably digest food, and ulcers are no exception.

If you realize you are not wanting to eat as much as usual, it might be time to talk to your doctor.

Now, appetite loss can naturally lead to the following sign of ulcers…

Weight loss is directly related to the previous symptom, as appetite loss can directly lead to weight loss. Unintended weight loss is weight loss that is not the result of deliberate diet and exercise, and it’s a common sign of ulcers.

When someone doesn’t eat enough calories to meet their energy requirements, the body goes to the next best source of energy: body fat. In other words, the body starts burning up body fat as fuel, and the result is usually weight loss.

Creating the feeling of feeling full—even though someone hasn’t eaten—is a survival mechanism. Specifically, there are times when either someone can’t eat (e.g., lack of food) or shouldn’t eat (e.g., ulcers). To dissuade someone from eating, the body creates the sensation of feeling full.

Refraining from eating despite normally possessing a healthy appetite or stopping midway through meals can be signs of this symptom.

Unfortunately, the following unpleasant condition is yet another sign that ulcers are to blame…

Other than through loss of appetite, ulcers can contribute to weight loss by inducing vomiting. Even if the sufferer attempts to consume food, the inflammation caused by the ulcer can cause the digestive system to respond violently (i.e., vomiting).

Ulcer irritation is enough to block the digestive pathway to food. Now, one way or another, food needs to exit the body. If the food cannot continue its journey through the intestines as waste, it comes back up the way it entered the body—through the mouth. Vomit that is bloody or looks like coffee grounds can point to an ulcer.

Of course, someone doesn’t just have to vomit to lose weight; merely the thought of potentially throwing up can be enough to dissuade someone from eating in the first place…

Nausea is no fun. It is an ominous feeling of uneasiness and discomfort that may or may not be accompanied by the pain associated with vomiting. Either way, nausea can be debilitating.

Specifically, nausea is a response to let the body know that it needs to reject things that could lead to illness or discomfort, such as food poisoning, excessive consumption of alcohol, or, in the case of ulcers, stomach irritation.

Now, sometimes someone won’t bring anything up when they attempt to vomit, which can lead to the following symptoms of stomach ulcers…

Heartburn and burping are related to the body’s attempts to combat ulcer discomfort. When the digestive tract is blocked (as a result of the body’s inflammatory response to the ulcer), acid builds up. As a result, it has nowhere to go but towards the esophagus. This process can result in sensations like heartburn. It can also lead to burping if the air is trapped.

Ulcers can cause bleeding in the stomach. That blood can wind up in stool, giving it a dark and tar-like appearance.

Dark stools alone cannot indicate ulcers. After all, black-colored stool can result from something as simple as consuming too many iron supplements. Whatever the cause, stool that remains consistently dark or at any time shows visible blood should be discussed with a doctor right away.

Depending on the severity of the ulcer, a temporary or long-term case of anemia may occur. Anemia is a condition where the body doesn’t have enough red blood cells. Stomach ulcers can cause bleeding, which can result in a deficit in red blood cells, or, anemia.

Common signs of anemia include fatigue, pale skin, shortness of breath, dizziness, and hair loss. Talk to your doctor if you notice any signs developing.

So, just what is the most uncomfortable ulcer symptom of them all? It might just be the following…

Indigestion, or dyspepsia, is a classic symptom ulcer sufferers experience. Indigestion is a medical condition characterized by abdominal discomfort or pain that’s often accompanied by other symptoms. When bacteria enter the body, the immune system ramps up and often inflames, which can exacerbate ulcers.

So, what’s most important for someone who thinks they have a stomach ulcer to know?…

Take Charge of Your Digestive Health

The best way to treat ulcers is to treat their underlying cause. However, this process first involves identifying an ulcer in the first place.

Because ulcers show symptoms so similar to many other conditions, it’s important to look for the previously mentioned signs clumped together. In other words, when these symptoms travel in packs, the case for ulcers strengthens.

There is no one way to 100% prevent ulcers. There are, however, plenty of ways to effectively reduce the risk of developing ulcers in the future. Some of these methods include:

The only sure-fire way to know if you have ulcers is to see a doctor. Once there, you can list your symptoms, which will help the practitioner make a more accurate diagnosis.