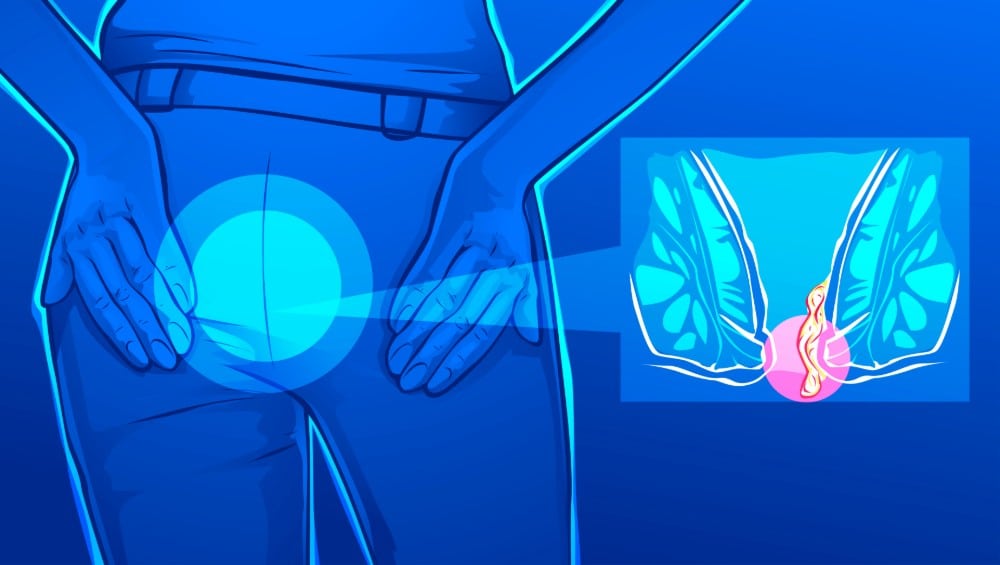 With over 50% of all adults experiencing hemorrhoids at some point in their lives, it’s a medical condition that’s all-too common. Despite how common it is, many people don’t quite know all that much about this condition, from the signs of hemorrhoids to potential treatments.

Let’s break it all down, so you can kick hemorrhoids to the curb.

So, just what exactly are hemorrhoids, anyway?

How are hemorrhoids treated?

Luckily, preventative measures, home remedies, and over-the-counter medications are often enough to treat the irritation and mild pain that result from this condition (don’t worry; we’ll discuss these in greater detail later on).

What are the symptoms of hemorrhoids?

Not sure if you are suffering from hemorrhoids? Consider the following symptoms before contacting your doctor…

An early indicator of hemorrhoids? Itching around or even in the anus.

How severe is the itching?

This itching may be mild to extreme in nature, depending on the size, number, and severity of the hemorrhoids present.

Itching is generally the result of internal hemorrhoids that protrude through the anus due to straining or prolonged sitting. Also known as prolapsed internal hemorrhoids, these protrusions produce mucus that can irritate the sensitive lining of the anus, causing itching and, in more severe cases, the following…

Intrinsically linked to the itching sensation produced by prolapsed internal hemorrhoids, irritation is also a common symptom of those suffering from this condition.

How severe is the irritation?

As with itching, the size and number of the hemorrhoids present will often dictate the severity of the irritation, as will the individual sufferer’s unique skin sensitivities.

The following sign of hemorrhoids? It’s easily spotted with the naked eye…

Although not all hemorrhoid sufferers will have visible physical symptoms, many do. These physical manifestations are often lumps of various sizes that can be found in or around the anus.

Remember: hemorrhoids are the result of swollen or strained blood vessels. So, any visible or palpable lumps are simply these enlarged blood vessels protruding from beneath the skin.

Unfortunately, these protrusions can also lead to the following…

Less common than either itching or irritation, some people suffering from hemorrhoids will experience pain or discomfort inside the rectum or in the general region of the anus.

Although this pain is not always a symptom of hemorrhoids and may indicate other concerning issues, moderate pain in conjunction with itching, irritation, or lumps could indicate that this irritating condition is to blame for your discomfort.

This pain may be the result of swelling of the blood vessels themselves or additional swelling in the immediate vicinity of the hemorrhoids.

Additionally, pain may occur at the site of intense irritation, where the raw skin is most susceptible to additional abrasions from clothing or from scratching to alleviate itching.

In severe cases, the following visible sign of hemorrhoids may occur…

In some cases, those who suffer from hemorrhoids will not experience significant pain or irritation, but may experience bleeding from the anus.

How severe is the bleeding?

This blood loss is generally minimal and rarely poses a significant health threat. However, the sight of blood may cause concern for sufferers who are not expecting it.

Bleeding due to hemorrhoids usually manifests as small spots of blood on toilet tissue after wiping or as dark red streaks present in passed stools.

Furthermore, external hemorrhoids can be abraded by forceful cleaning or scratching, which may also lead to bleeding.

If the bleeding is constant or profuse, a physician should be consulted to rule out other possible causes.

Unfortunately, the following sign of hemorrhoids may further worsen bleeding…

A direct result of significant swelling, some hemorrhoid sufferers may experience painful bowel movements in addition to general pain and/or bleeding.

How severe is the pain?

This pain can range from mild to relatively moderate, and will depend on the amount of swelling and number of hemorrhoids present.

Additionally, swollen tissue around the anus may be tender or raw from itching and irritation, which can make bowel movements even more painful as the stool comes into contact with the inflamed tissue.

If the pain is intense or constant, a physician should be consulted to rule out other possible causes.

In turn, this leakage can further irritate the skin surrounding the anus, leading to further pain, irritation, and potential infection.

While this symptom is largely just annoying, that cannot be said of the following alarming symptom of hemorrhoids…

Also reasonably rare, hemorrhoids can develop a blood clot inside the swollen vessel or lump.

Hemorrhoids are effectively engorged lumps caused by swollen blood vessels. Sometimes, when the blood contained in these lumps is not allowed to flow freely, clots form.

In rare cases, this symptom of hemorrhoids can lead to the following…

What is iron deficiency anemia?

Anemia refers to a condition in which someone lacks healthy oxygen-carrying red blood cells. When anemia is the direct result of an iron deficiency, it is known as iron deficiency anemia.

What are the symptoms of iron deficiency anemia?

Symptoms of anemia include:

Iron deficiency anemia is generally associated with blood loss. So, hemorrhoids rupture or otherwise bleed, anemia could be a possibility.

However, the blood loss must either be significant in volume or occurring over an extended period of time to put hemorrhoid sufferers in any true danger of anemia. If significant bleeding occurs, consult a physician to ensure that no other medical conditions are present.

Hemorrhoids are a real pain in the behind. Fortunately, there are plenty of ways to fight this condition, such as the following…

The best defense against hemorrhoids is prevention. After all, the fewer hemorrhoids that develop, the less amount of treatment is needed.

Stop constipation in its tracks.

One way to reduce the occurrence of hemorrhoids? To limit instances of constipation. Why? Because constipation can generate stress, which leads to hemorrhoids. Essentially, the less stress put on the anus by straining to pass a hardened stool, the less likely hemorrhoids are to develop.

To prevent or reduce constipation bouts, people can do the following:

What are some high-fiber foods?

Foods high in fiber include:

What about fiber supplements?

However, if constipation still occurs, various over-the-counter fiber supplements are available that can soften the stool and make bowel movements easier. Psyllium and methyl cellulose are common fiber supplements.

Of course, there are plenty of other non-medicated ways to find relief from hemorrhoid pain…

One of the most common complaints surrounding hemorrhoids? Pain. Therefore, because hemorrhoids are generally harmless and often resolve on their own, one of the most important aspects of hemorrhoid care is pain relief.

What are some non-medication methods for dealing with hemorrhoid pain?

For those wishing to avoid medication, soaking in a warm bath for 10-15 minutes every day.

Patients suffering from hemorrhoid pain should continue to practice good hygiene, cleaning the affected area regularly with warm water during (and even between) regular daily baths or showers to relieve itching and prevent infection.

However, soap should generally be avoided, as the harsh chemicals in soap can aggravate hemorrhoids and cause additional pain.

Finally, people with this condition should avoid using rough, dry toilet paper during wiping; instead, consider using baby wipes or other soft, moist wipes after each bowel movement.

Many people don’t want to wait for pain relief. That’s why the following treatments for hemorrhoids are incredibly popular…

If the pain doesn’t go away or worsens, hemorrhoid sufferers may consider over-the-counter (OTC) pain relievers.

What are some popular OTC remedies?

One of the most common forms of over-the-counter hemorrhoid relief is topical treatments, such as hydrocortisone or hemorrhoid ointments or creams. They are used to relieve the itching and burning associated with this condition. The hope is that by doing so someone will be less likely to scratch the area, a behavior that can lead to further irritation.

If creams or ointments are not desirable, medicated suppositories offer a more convenient alternative. These suppositories are, as the name implies, inserted into the anus and left there to deliver medicated relief directly to the source of pain.

If the pain persists, patients should consider oral over-the-counter pain relievers like ibuprofen, aspirin, or acetaminophen.

When is a doctor necessary?

If the hemorrhoid pain persists or increases, it is important to discuss the condition with a physician to rule out other, more serious, medical conditions.

It is also important to never begin a pain-relief regimen without express permission from a doctor.

In some cases, the following treatment may be necessary to banish hemorrhoids…

Ideally, hemorrhoids should resolve on their own with only minimal need for pain relief or additional treatments.

However, if the hemorrhoids:

a physician should be consulted.

What surgical interventions are common?

Depending upon the size and severity of the hemorrhoids in question, the doctor may recommend either a rubber band ligation or sclerotherapy.

What is rubber band ligation?

Rubber band ligation is a procedure that cuts off circulation to the hemorrhoid through the use of a rubber band placed around the protrusion. Once placed, this band reduces the blood flow to the hemorrhoid, causing it to shrink.

A relatively simple procedure, ligation can cause some discomfort at the sight of the band, and should only be performed by a licensed medical professional.

Sclerotherapy, also known as injection therapy, may be an option for patients who cannot undergo rubber band ligation. For sclerotherapy, the doctor injects a chemical compound directly into the blood vessel feeding the hemorrhoid, causing it to shrink in size.

What’s most important for those who think they have hemorrhoids to know?…

Kick Hemorrhoids to the Curb

Ultimately, hemorrhoids are common and often require little treatment as they generally resolve on their own without significant medical intervention.

When are hemorrhoids a problem?