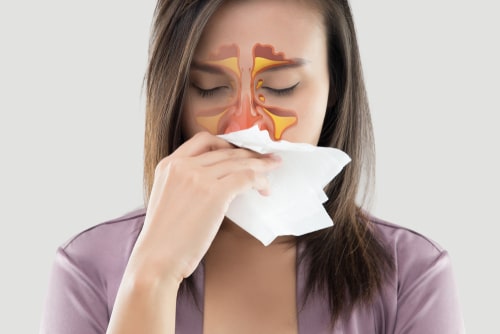 Also known as allergic rhinitis, hay fever is an all-too-common allergic condition that affects 19.2 million people in the United States alone, based on the results of the 2018 National Health Interview Survey.

What are the symptoms of hay fever?

Hay fever happens due to an allergic reaction in response to various kinds of allergens. These allergens include dust, pollen, tiny bits of animal fur and skin, and the like. It usually lasts for as long as the person is exposed to the sources of these allergens.

Scroll down to learn more about hay fever’s symptoms…

A person tends to suffer constant sneezing when stricken with hay fever. Instant exposure or inhalation of allergens and other irritants is enough to make you start sneezing profusely.

As sneezing occurs more, expect the following symptom to come by more often as well…

The loss of smell is formally known as anosmia. Anosmia is often a result of an allergy and studies have shown that it is caused by allergies or nasal disorders. What happens is that when the nasal passages get inflamed, it hinders us from being able to smell properly.

Does it affect my taste buds as well?

Yes, because the senses of smell and taste are closely linked to each other. Therefore, if smell is affected by anosmia, the taste buds will be too.

The following is another all-too familiar symptom of allergies…

There’s nothing more uncomfortable than having both a runny and clogged nose. Like sneezing, these symptoms are often triggered and exacerbated by irritants like smoke, pollen, or even being around pets like dogs and cats. Such conditions usually last about 3 to 5 days at a time.

Your nose won’t be the only thing dripping, though…

Experiencing red and watery eyes is a normal symptom of hay fever. Some people’s eyes can be a bit more susceptible to allergens than other people are. This heightened sensitivity causes the eyes to become itchier, redder, and have blurrier vision.

Swollen eyes, on the other hand, are caused by the accumulation of fluid below your eyes. Unfortunately, this symptom can take awhile to subside.

Wiping your eyes every now and then can be vexing, but having watery eyes is actually a natural bodily response to allergens. Namely, the eyes produce excess tears to flush out irritants.

Let’s go further south to our next symptom…

When our nasal passages are clogged, we usually tend to breath through our mouths instead. The result is that our mouths can’t filter air the same way our noses do. As a result, the throat becomes easily affected and becomes drier and itchier.

And having a dry, itchy throat can make you prone to the following…

This sign is a direct consequence of our previous symptom. When the nasal passages can’t filter air properly, it creates more mucus that flows down to your already dry throat. This event causes a tickling sensation that will eventually lead to coughing.

7. Sinus Pain In The Temple Area

That dull pain in the sinuses is often a troublesome effect of hay fever. Here, your sinuses tend to get swollen and inflamed, causing you to feel an aching pressure in your temple area. This area includes your forehead, the area between your eyes, both sides of your nose, and your upper jaws.

Is it any different from sinusitis?

While hay fever and sinusitis share a couple of common symptoms, they likewise have some differences. The color of nasal discharge, for example, is a good indicator. Specifically, if it’s clear, it’s a sign of hay fever, while having green or yellowish-colored mucus can indicate sinusitis. When in doubt, you can always consult your doctor.

As pressure is felt in the temple area, it causes the following symptom…

Hay fever headaches are a result of the above-mentioned sinus pressure in the temple. These headaches are characterized by an intense, throbbing sensation, causing an overall unbearable pain that is further worsened by head tilts and movements. The pain is usually felt upon waking up, gradually disappearing hours later.

Having considered the last few symptoms, it’s not surprising that this next symptom is on our list…

Experiencing fatigue while having hay fever is caused by several factors. One is the fact that allergic reactions produce certain chemicals that, while they help fight allergies, may worsen other symptoms as well. This event causes more discomfort and makes sleep difficult, leaving you even more tired and unwell than before.

This next symptom, like headaches, is likewise a result of sinus pressure…

With hay fever, a lot is going on in the temple area: clogged and runny noses, sinus pressure, and watery eyes. These symptoms all take their toll on the ears. Not only can you feel soreness in your ear, but some patients even report a temporary weakened sense of hearing. Ringing in the ears and lightheadedness can also be felt at times.

Our last few symptoms are mostly felt by asthma sufferers…

Although a lot of people may not know this, the symptoms of hay fever can trigger flare-ups for asthma sufferers, particularly difficulty in breathing. This is because asthma patients already have inflamed airways, and having hay fever can make them swell up more, causing them to suffer shortness of breath.

And this brings us to our final symptom…

12. Tightening of the Chest

This symptom is caused by the narrow flow of air through the already narrowed nasal passageways. As it goes, wheezing also occurs, which is the sound of air traveling through them. Coupled with the aforementioned shortness of breath, this can cause serious problems for people with asthma, so they must seek medical help as soon as possible.

While one might dismiss hay fever as harmless allergy attacks, it can cause serious problems for some people, especially those with existing health problems. Should anyone experience such problems regarding hay fever, it’s important for them to contact a physician to access proper care and treatment.