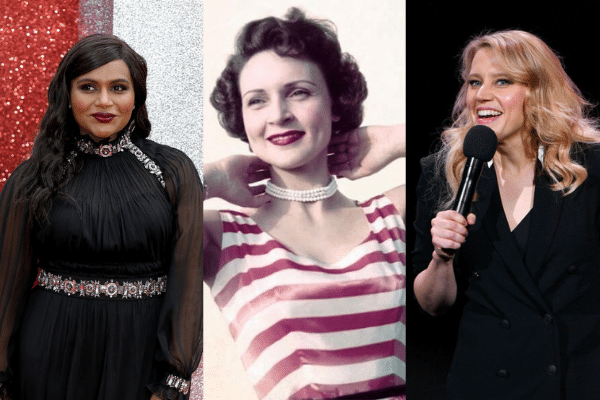 Hollywood is home to some pretty talented women. Some can sing, some can dance, and many can act, yet among our absolute favorite stars are those gorgeous women with an unparalleled talent for comedy. In showbiz, there’s a collection of gifted ladies who not only have good looks, but also a great sense of humor.

From veteran comedians who paved the way for women in comedy, to beloved sitcom stars and Saturday Night Live cast members, these are the lovely ladies who make us laugh.

Bombshell beauty Sofía Vergara is a force to be reckoned with. The Colombian-American actress, television producer, and model is a four-time Primetime Emmy Nominee and a two-time winner of the People’s Choice Award (once for Favorite Comedic TV Actress, and once for Favorite Comedy TV Star). For eleven seasons of ABC’s hit sitcom Modern Family, Vergara brought both the gorgeous looks and the giggles to our TV screens as Gloria Delgado-Pritchett, and has lent her comedy skills to many other projects over the years.

Fox’s hilarious and critically acclaimed sitcom New Girl ran for seven successful seasons, with Zooey Deschanel at the forefront starring as the lovable, quirky school teacher Jessica “Jess” Day. In addition to acting in a number of comedic films such as Yes Man (costarring famous funnyman Jim Carrey) and The Hitchhiker’s Guide to the Galaxy, Deschanel models and is a successful singer and musician.

After a brief stint on NBC’s The Office, actress Rashida Jones would switch over to the network’s other workplace-based comedy series, Parks and Recreation, where she entertained all as nurse Ann Perkins for seven seasons. Jones has used her comedic charms in movies such as I Love You, Man, and has also worked as a writer, producer, and director.

Never forget that before Lucille Ball’s I Love Lucy days, she was already a successful actress in a number of Hollywood films. But I Love Lucy was the show that catapulted Ball’s career into the heavens, making her one of the funniest famous women of all time. Behind the famous red locks was a brain hardwired for comedy, and following the success of her first sitcom, Ball would go on to star in other series such as The Lucy Show and Here’s Lucy.

Fans of The Office know the talented Mindy Kaling for her role as the bubbly, often boy-crazy Kelly Kapoor. Kaling doesn’t just have comedic talents onscreen, however. She wrote over twenty episodes of The Office, and then went on to create The Mindy Project, the Fox-turned-Hulu series where she was the titular star, as well as one of the show’s writers and an executive producer.

Actress Constance Wu is best known for starring in the ABC comedy series Fresh Off the Boat as the sharp, no-nonsense wife and mother Jessica Huang. Wu also starred as Rachel Chu, the main character in the beloved rom-com Crazy Rich Asians (whose sequel is currently in preproduction). With Wu’s various roles in Hollywood, in addition to her advocacy for Asian Americans offscreen, she has helped pave the way for further Asian American representation in both comedic and dramatic roles.

Actress, writer, and comedian Chloe Fineman has been one of the breakout cast members of Saturday Night Live during the past few years. Armed with a wide range of accents and spot-on celebrity impressions ranging from Carole Baskin to Drew Barrymore and Britney Spears, Fineman has brought a fresh dose of humor to the famed sketch comedy show.

We have actress, writer, and producer Issa Rae to thank for creating and starring in the heartfelt, comedy-drama HBO series Insecure. From some of the show’s funny, sweet mirror moments and freestyle raps to Rae’s other comedy roles in films such as Little and Netflix’s The Love Birds, Rae is a proven comedic queen with six Primetime Emmy Nominations to her name.

For ten seasons, actress and producer Jennifer Aniston entertained TV watchers worldwide by starring as Rachel Green in Friends, which is widely regarded as one of the greatest sitcoms of all time. Besides Friends, Aniston has acted in a fair share of romcoms and comedy movies, from Horrible Bosses and We’re the Millers to The Bounty Hunter.

Funnywoman Tiffany Haddish is a triple threat as an actress, stand-up comedian, and author. She has two stand-up specials, She Ready and Black Mitzvah, currently on Netflix, and rose to fame in the acting world when starring in the NBC sitcom, The Carmichael Show. Some of Haddish’s funniest films include Girls Trip, Like a Boss, and Keanu.

Over the last ten to fifteen years, Iliza Shlesinger has risen to fame as perhaps one of the funniest women of the new millennia. In 2008, she became the first woman to win NBC’s Last Comic Standing, which cemented her status as a funny, feminine icon in stand-up comedy. Prolific and hilarious, she has five stand-up specials and counting, four of which are currently available on Netflix. She has also acted in a number of films.

As a comedienne, actress, and writer, Ali Wong keeps the laughs rolling whenever she’s writing or onscreen. Wong has two stand-up specials (each filmed while she was pregnant), in addition to the beloved Netflix rom-com Always Be My Maybe, in which she starred, wrote, and executive produced. She also showcased her comedy skills as a staff writer for ABC’s family sitcom Fresh Off the Boat.

Starring in over ten seasons and counting on Saturday Night Live, Kate McKinnon is a talented and downright hilarious actress, writer, and comedian. When not performing on the sketch comedy series in various wigs, costumes, and with an impressive array of accents, McKinnon has starred in comedy films such as Ghostbusters and The Spy Who Dumped Me.

Best known for her role as April Ludgate on NBC’s Parks and Recreation, actress and comedian Aubrey Plaza has acted in several comedic shows and films throughout the years, from Portlandia to Dirty Grandpa, Ingrid Goes West, and Mike and Dave Need Wedding Dates. She also has had a number of voice-acting roles.

The late and great star Betty White had talent and a sense of humor that kept us all entertained for over eight decades. From her work on The Mary Tyler Moore Show to her own The Betty White Show, and then her iconic role as Rose on The Golden Girls, White was a babe with beauty and gut-busting wit. In addition to her TV work, White had plenty of humorous, show-stealing parts in comedy films such as You Again and The Proposal.