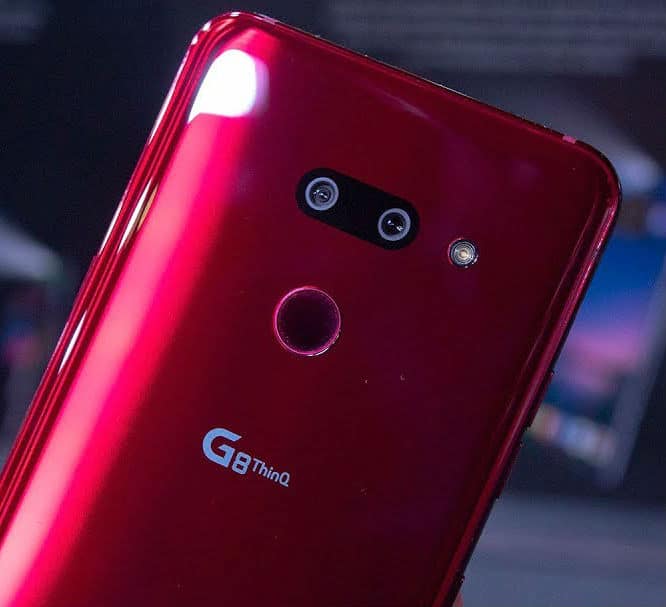 The LG G8 ThinQ was officially announced in February 2019, and the specifications look promising and attractive as technology is pushed a notch. It is set to revolutionize 2019 with its stunning design, powerful dual-lens camera, and many more aesthetically pleasing features.

The phone is elegantly designed, equipped with a 6.1-inch, edge-to-edge AMOLED touch screen using Gorilla Glass 5. The front and back are clear glass with an aluminum frame. It goes to show that LG has gone all out with this model, bringing it an air of opulence. The display is picturesque with a resolution of 1440 by 3120 pixels, and 16M combined with Dolby vision to give users a clear image.

The front display is notched at the top to provide space for the cameras, rather than the speaker, which is integrated into the screen through LG CSO (Crystal Sound OLED) technology. These advances, coupled with the boom box, provide loud stereo sounds with the screen reportedly vibrating on higher volume. The back is imprinted with the G8 ThinQ logo and consists of a fingerprint sensor over the glass. The cameras lie behind the glass rather than being located on a separate panel. The bottom consists of a USB type-C port and a headphone jack with active noise cancellation to complete the outer presentation of the phone. Color options include Carmine Red and the new Moroccan Blue and Aurora Black.

The phone is fitted with a Qualcomm Snapdragon 855 chipset with an octa-core processor and GPU Adreno 640. It runs on the latest Android version 9.0 (Pie) and has 128 GB ROM and a RAM of 6GB. As such, the G8 ThinQ promises to be a beast of a machine in terms of performance. The phone comes in two options—the dual SIM and single SIM—with the memory card slot being a dedicated slot in the single SIM and as one of the options in the dual SIM. Expandable capabilities provide up to 512GB.

Additionally, the battery is a non-removable Li- Po 3500mAh. It comes with fast-charge capability and also the ability to charge wirelessly. Combined with other high-tech connectivity features, users will get a top-notch experience.

The back is equipped with two camera sensors, with the standard 12-megapixel f/1.5 sensor coupled with the 16-megapixel f/1.9 full range sensor. Fitted with LED flash, HDR, and panorama, the phone can give a maximum of 2160p image quality. This proves that LG means business on the camera front.

The front camera carries most of the juice in applicability. The front “Z” camera is equipped with an 8-megapixel sensor with infrared and is capable of recognizing facial and air gestures.

The front camera can assess air motions without touching the phone. For example, the Hand ID lets the phone recognize the user through the vein patterns on the hand with the help of infrared technology. In other words, a user can simply hold a hand over the phone and lift it slowly; the phone opens up instantly through recognition.

During the official release, the prices were not mentioned; however, it’s probably going to cost almost the same as the G7 ThinQ. This phone was priced at $749. According to speculation, the G8 ThinQ will be slightly pricier at an average of $900.

If you’re ready to take everything to the next level, check out the LG G8X. It includes a 32MP front camera, ultra-wide rear camera, and standard rear camera. It’s all powered by a 4,000 mAh battery to last longer. You’ll want that extra power if you purchase the additional LG Dual Screen.

The Dual Screen allows you to turn your smartphone into a sort of high-tech flip phone. You’ll get a phone with two fully functional 6.4″ screens, ideal for working or playing.

The LG G8 ThinQ is a phone worth owning in the future. As updates appear, the phone might surpass expectations through performance, design, and appeal.

Travel Facts - Things to know when going to the Czech Republic