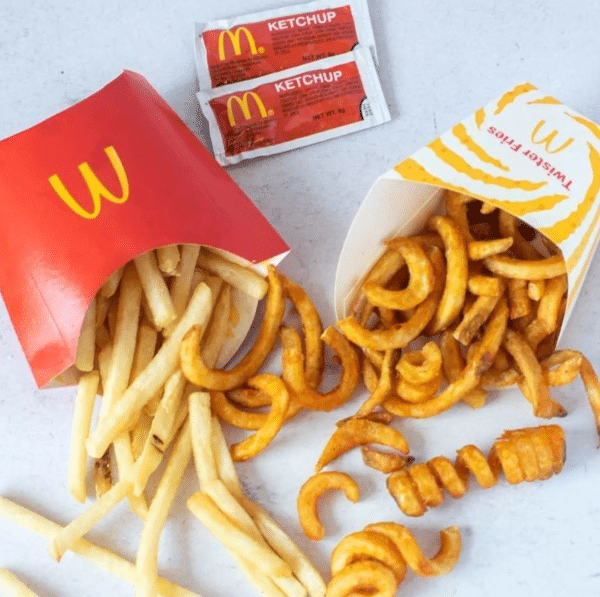 Known for its Big Macs and McFlurries, Happy Meals and McMuffins, most foods on McDonald’s menu are familiar, tasty, and (usually) best enjoyed in moderation. But beyond the famous American hamburgers and fries, the fast-food giant has many fascinating offerings abroad.

Have you ever thought the McRib or Shamrock Shake were weird? You won’t after seeing what these international McDonald’s have on their menus! From pouring some questionable condiments on fries, to unconventional buns and a hand pie that’s definitely not stuffed with apples, these are some of the most unique McDonald’s menu items from around the world.

Note: As some of these are seasonal and/or special promotional dishes, they may not currently be available at the locations listed.

What it is: A classic Canadian dish of French fries topped with cheese curds and brown gravy

Where you can get it: Canada

We know what you’re thinking: McDonald’s French fries covered in gravy? Ick! However, keep in mind that if you love mashed potatoes and gravy, poutine isn’t that different, and there’s an added bonus with all those delicious cheese curds mixed in.

What it is: A McFlurry with blue bubblegum flavoring and marshmallows

Where you can get it: Australia

No, no one’s putting pumpkins in McFlurries. “Squash” is Australian slang for marshmallows, so this is really just a bubblegum marshmallow McFlurry. Personally, that still doesn’t sound too appetizing to us, but maybe that’s because the bubblegum syrup is such a bright shade of blue!

What it is: A sandwich with buns made from sticky rice patties

Where you can get it: Singapore, Indonesia, Taiwan, and the Philippines

We could argue which is actually healthier, buns made from bread or buns made from rice, but we’re more interested in what the texture of a Big Mac or Filet-O-Fish would be like between two rice patties. Soft? Or more crunchy, like if it were between two hashbrown patties? We want to know!

What they are: Curly fries!!!

Where you can get them: the Philippines and Singapore

How is it humanly possible that Singapore and the Philippines get McDonald’s curly fries (or Twister fries, which sound even tastier), while the rest of us worldwide suffer without them? We didn’t know we needed these, but now they’re all we can think about!

What it is: A hand pie stuffed with taro root (which is basically a purple sweet potato)

Where you can get it: Hawaii and Singapore

McDonald’s Baked Apple Pies are pretty famous and pretty delicious. The colorful taro pie is much less well-known, but it’s apparently pretty tasty. We already like sweet potato pie, so why not make a purple, handheld version?

What it is: A grilled, bacon-infused mac and cheese sandwich

Where you can get it: Hong Kong

If grilled cheese and mac and cheese got together and had a baby, it’d probably look like this. Unfortunately, while this McDonald’s dish sounds delicious in theory, in reality, it seems like a greasy mess!

What it is: A lobster roll sandwich

Where you can get it: Canada

While Red Lobster may have made this tasty red crustacean a bit more accessible to the general public, we’re not sure McDonald’s should have followed suit. Also, “getting lobster from McDonald’s” just doesn’t sound quite right.

What it is: McDonald’s French fries drizzled in white and milk chocolate

Where you can get it: Japan

For lovers of sweet and salty foods, this certainly unique French fry dish might be for you. Is it really that different than dunking your fries in your milkshake? Well, kind of, but who cares if it’s delicious?

What they are: Sticks made of corn

Where you can get them: Israel

What initially looks like mozzarella sticks or oddly-shaped chicken nuggets turns out to be deep-fried corn sticks. With a warm, creamy filling, they’re typically served in a Happy Meal or as a breakfast item. The concept seems a little strange to us, but technically they’re not that different from corn fritters.

What they are: Two small burgers, one black and one white

Where you can get them: China

Now, this is some fancy lookin’ McDonald’s! The black burger, topped with black pepper sauce and onions, gets its dark hue from a squid ink-dyed bun. Meanwhile, the white burger (which is actually a fried chicken sandwich) has a pale bun topped with black sesame seeds.