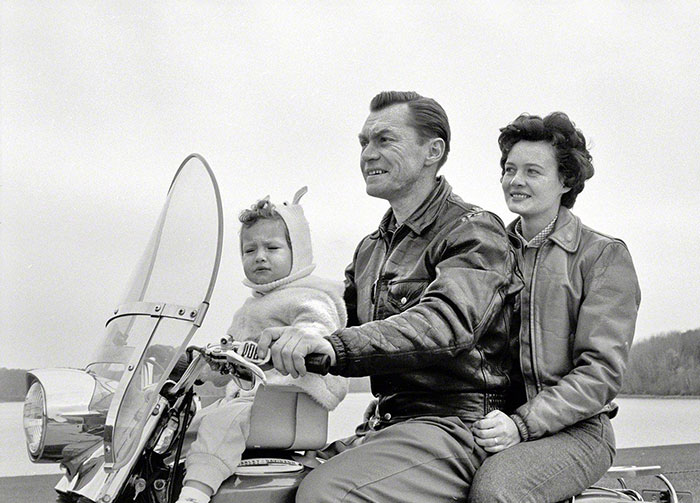 “Today’s youth is being coddled! Smartphones, seatbelts, and snow days when it’s just a little cold out are conspiring to spoil you kids!” Older relatives everywhere remember the “good old days” with a gleam in their eye.

That’s because the good old days were a free for all when it came to parenting! To be fair, our parents couldn’t Google parenting tips, and most of the safety standards we have today were not yet in place. Kids were expected to make their fun and learn the ups and downs of life as they went.

This article is a loving nod to the Moms and Dads who did the best they could, and all of us kids who survived and live to tell the tales!

Throwin’ One Back While Holding a Baby Alligator

It would appear that three-year-olds living in Australia in the 1980s needed a little liquid courage to capture deadly animals. It would also appear that neither of the adult nearby–the one taking the photo or the one watching from behind–was concerned.

Mom’s Arm is Basically a Seatbelt

Most of us have been in a car with our Mom or Dad when they had to break a little too quickly. You know what happens next–that arm shoots out to the side to save us from all danger. We hope this particular Mom had a powerful arm.

We’re assuming this kid’s Mom told him she would do “anything” for him, and he took her up on it. Also of note is that kids only wore clothes when they absolutely had to in the 1980s. Bike riding was a no clothes required activity.

Take Your Baby to a Rally Day

This Mom and Dad thought they’d put their baby in a box and bring him to a Marijuana Initiative Rally in 1972. I mean, it was basically in a park, and he did have her pacifier to keep him cozy—nothing more to see here.

Once upon a time in 1959, this Mom, who was a veterinarian, brought a lion home from work. She raised it, along with her family, for two years. The young boy pictured got to tell his friends, “Come over to my house, we have a lion!” We’re lowkey jealous.

Just a Prince and Princess Taking a Load Off

These kids lived in Germany in 1955. Apparently, most everyone who lived there during that period needed a drink and a cigarette.

Some people wait to go ice skating until they’ve lined up a babysitter. In 1937, this couple figured, “Eh, the baby will be fine rigged between us with underwear and strips of elastic. Time to hit the rink!”

Hittin’ the Bar After a Long Day of Playing

Back in the early 80s, parents used to bring their kids everywhere. People smoking cigarettes? No problem. Guys drinking and getting into bar fights? Well, just watch out for the baby. After all, you know the old saying, “The family that barhops together stays together.”

They Don’t Make Fishing Poles Like The Used To

In the 1930s, Moms and Dads knew the importance of multi-tasking, so they would teach their kids to fish and swim simultaneously. Also noteworthy is that this photo was taken in Florida, where there were undoubtedly alligators and other “surprises” awaiting the children if they didn’t learn to swim QUICKLY.

Just Prop the Baby Up and Drive, Mom

We’re assuming gravity worked differently in 1958. Otherwise, this was always a horrible idea. The baby isn’t strapped into anything, and the seat itself is precariously propped up in a way that wouldn’t withstand even the slightest bump in the road. Even the baby seems to realize it’s up to him to hold on for dear life.

This young man became a man at his Bar Mitzvah in 1972. It’s a tale as old as time–boy becomes a man while his Mom, brother, and Father look on. We can’t help but notice his Dad remains unimpressed. Apparently, he’s seen it all.

They made Harleys a little differently in 1962. Not only could you customize your ride with a stylish headlamp, but you could also add a baby seat to the front for your convenience. All without having to worry about those pesky, life-saving helmets: now, let’s turn our attention to the suction cups that attached to the gas tank for safety . . .

When this Dad dressed his son up just like him, he opted to add a real-life cigarette to give the costume authenticity. He could have given him a candy cigarette or a bubblegum cigar, but this Dad goes all in, and so does his boy.