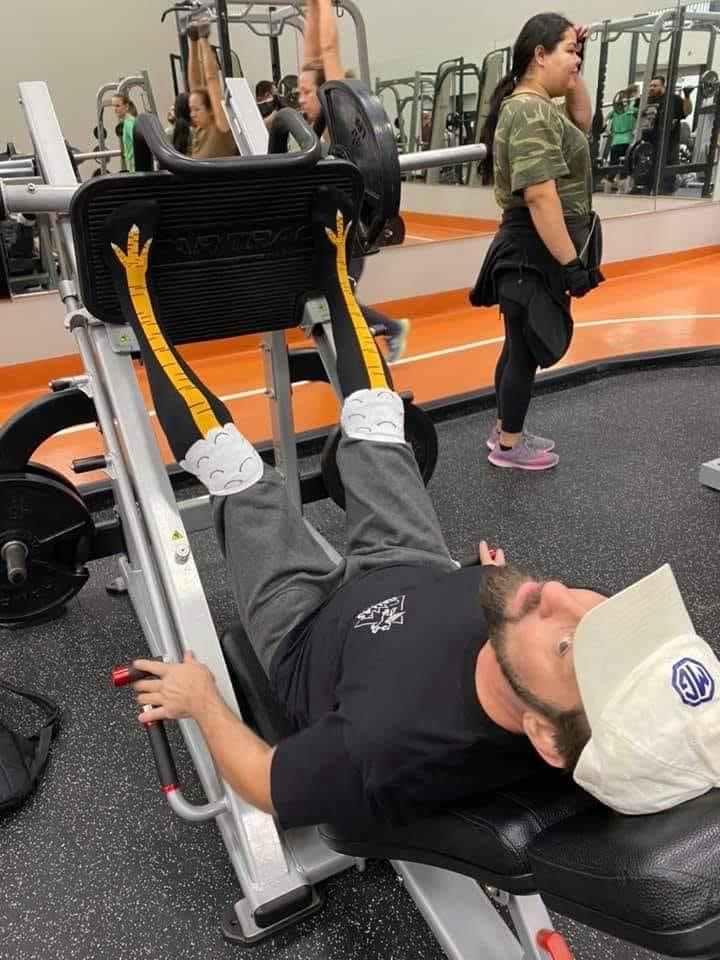 Some of us love the gym. Some of us avoid it like my dog avoids the vacuum cleaner, or like I avoid crying babies on airplanes (just kidding, your kid is adorable . . . ).

One thing I can confidently say we all love is when we’re mid-workout and something entertaining happens. Maybe your favorite show airs on the TV right in front of you. Maybe your earbuds start to blast your favorite song! Maybe that guy who takes selfies stands in the perfect spot for you to photobomb his Instas. Score!

We salute those moments and people who make the gym more entertaining and enjoyable. Like this guy with the chicken leg socks–thank you. This is the kind of thing we need to finish our treadmill sesh with flair. Well, that and some of these other next-level gym shots . . .

Some people love to go the extra mile when it comes to fashion. This gym instructor took leotard outfits to the next level when he wore a feline printed one during a client’s session. What’s extra hilarious is the photographer’s reaction!

How hard is it to find a gym buddy that is as enthusiastic about exercising as you? Lucky for this guy, he didn’t have to go through the trouble of finding one. His dog was a willing companion and even has great form!

We love hardworking people because they inspire us to work hard, too. But how good must you be in order to inspire a parrot? We think you should be as excellent as this guy, who not only led this bird to exercise but even to copy his exact move.

New Year’s resolutions typically involve fitness goals. But, at the rate these two people are moving inside the gym, we wouldn’t be surprised if the resolution never happened!

Krispy Kreme donuts are loaded with sugar, carbs and calories, and they are definitely not the snack one would take to the gym. Interestingly, this fitness center set up a booth inside that totally defeats the purpose of working out. Seriously, if gym-goers eat donuts, what’s the point of even working out?

Before signing up at a gym, it’s important to check all the benefits and facilities that come with them. Unfortunately for this guy, despite finding a gym, he’s too tall. At least he’s still getting a work out?

We can’t help but laugh at this man’s logic of being one step ahead at the gym. He probably anticipated a shower so much he decided to do away with gym clothes.

Being cheered on while going through a difficult situation is surely one of the best feelings in the world. But what if a band literally showed up at the gym to cheer you on while you exercised?

Wasting time is not something this woman wants to do, it seems. Instead of idly waiting on the couch for her hair to be done, she went to the gym! Now that’s wise time management!

Who says you can’t bring your hobbies to the gym? This man is also on another level of productivity when he decided to knit a scarf while walking on a treadmill.

While it’s hard to believe that creativity also manifests in gyms because of the fixed routines, this guy is a living exception. Just take a look at how he managed to work out while enjoying his favorite show. Very clever!

One of the perks of a gym membership is the use of advanced equipment, which not only offers health benefits but also entertainment. This man made sure to maximize this privilege, although a little bit exaggerated, we think. Still, he made it to the gym so we guess it’s a good motivator, then.

Hitting Two Birds With One Stone

To work or to work out? Why settle for one if you can do both at the same time? This guy surely has the clever idea of making the most out of his chair by working and working out.

It is of utmost importance that we prioritize safety in all situations. However, this man must have confused the workout equipment with a real bike!

For heavy gym equipment, an instructor is necessary to guide users on proper usage and to prevent accidents from happening. Unfortunately, this watchman chose to look at a different subject, causing misery to this guy lifting weights. Ouch!

Some gym-goers try all sorts of things in order to hasten the process of achieving their weight goals. While some are successful, others seem to have a less fortunate conclusion to their causes, like this guy. We don’t exactly know what happened after this shot, but we’re certain it’s not looking good.

Finding a good life balance is one of the greatest challenges for new parents. Amusingly, this dad had no problem juggling both his father duties and fitness goals. However, we don’t recommend doing the same, as it looked particularly dangerous holding heavy weights above his head and his baby’s.

Music aids in setting the mood for a good workout, so it’s not surprising to find that most people at the gym have devices to listen to songs. This guy probably believes it’s a must even if it means awkwardly playing from his tablet!

Looking for hilarious inspiration to finally hit the gym? This photo is all you need. If a couch potato managed to pull his legs and head to the gym, then you can, too!

We know superheroes have massive strength and good physique. Here, Batman proudly displays his strength as he passionately works out to maintain his condition. While the concept is entirely bonkers, it seems like the girls in the back are enjoying it.

This lady truly gave a new meaning to the saying that age doesn’t matter. Her ultimate display of strength is truly inspiring and proves that passion knows no bounds as long as we keep going.

Who ever thought a baby couldn’t lift weights? His facial expression got us laughing really hard!

They say the truth sets us free, and this gym-goer couldn’t have done it better! While it certainly feels good to achieve a certain weight goal, it definitely feels better to accept and love yourself as you are.

There are some people who wouldn’t miss putting in extra effort to look their best no matter where they go, and this woman is clearly an example of that. We’re not sure how comfortable the heels felt during her workout, but hopefully it was worth the effort!

Ever thought someone with chicken legs could work out? Well, this guy is definitely the one to show it!