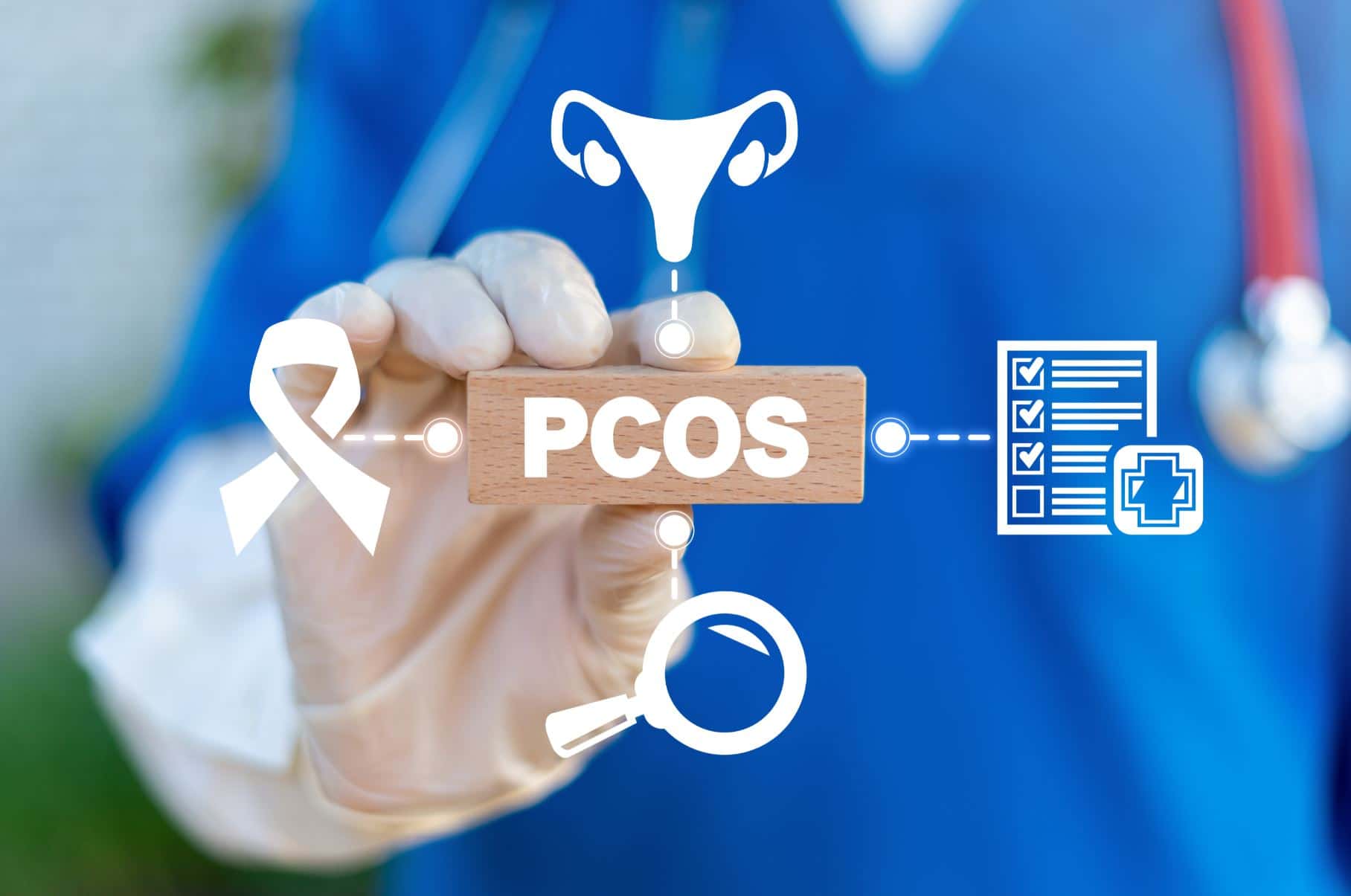 Polycystic ovary syndrome (PCOS) is a severe, painful medical condition that affects many women. The name, however, can be misleading, as many women who have PCOS don’t have ovarian cysts. Because of this, many women experiencing PCOS go undiagnosed until serious symptoms appear.

If you think you might have PCOS, continue reading to learn about potential symptoms and how to combat them!

The first symptom of PCOS for many women is an irregular period. Often, women with PCOS will have cycles that are longer than normal and vary from light to heavy bleeding.

The average menstrual cycle lasts 28 days. However, a menstrual cycle lasting 21-35 days is still considered normal from a medical perspective. If a woman has cycles of irregular intervals or the frequency of those cycles falls outside this normal range, PCOS could be the cause.

The following sign of PCOS also presents in those with diabetes…

Insulin resistance is one of the more serious underlying symptoms of PCOS. Unfortunately, many people go through life with the condition without realizing they have it.

When your body becomes insulin resistant, your cells are less receptive to the hormone insulin, which is crucial for regulating blood sugar levels. In order to keep your glucose (blood sugar) at a healthy level, your body produces more of this hormone. Unfortunately, this excess insulin affects the balance of other hormones in your body; that’s why this resistance is a significant factor in the hormone imbalances that characterize PCOS.

In addition, your pancreas beings to work overtime to keep your glucose levels down. Eventually, this becomes more difficult and the pancreas can’t keep up with demand. This exhaustion is why many people with insulin resistance develop type II diabetes.

Ovarian cysts are normal in all women of reproductive age. Every month, when an egg is maturing before being released, it forms a cyst on the ovary. Once the egg matures, it is released from the cyst and enters the Fallopian tubes.

However, in women with PCOS, the egg may not fully mature or enough hormones may not be produced for its release. This process can result in many cysts that should go away on their own over time.

Ovarian cysts are normal and typically go away on their own. However, if your ovaries are swelling or a cyst is enlarged, your doctor may take a wait-and-see approach.

Women with PCOS often discover they have the condition after having difficulty getting pregnant (infertility). Infertility is identified by a couple attempting to conceive for 12 months without pregnancy.

It’s important to note that just because someone has PCOS and/or experiences difficulty getting pregnant does not mean that they won’t ever conceive.

With PCOS affecting hormones so significantly, it isn’t surprising that the following symptom often develops in those who have this condition…

Women with PCOS often gain weight and struggle to take it off and keep it off. This struggle can occur even in very athletic individuals with a healthy diet.

Diet and exercise play an important role in weight loss with PCOS. Cutting back on processed sugars, increasing the intensity of workouts with high-intensity training exercises, and weight lifting are beneficial to all women. But with PCOS, they are essential for weight loss.

Unfortunately, PCOS makes it easier to shed hair than a few pounds…

Thinning hair and hair loss are possible symptoms of PCOS. Not only are these symptoms signs of underlying hormone imbalance, but they can also be very damaging psychologically, affecting one’s self-esteem.

One of the most common signs of PCOS is acne. If a woman is past the age of 25 and has cystic or hormonal acne occurring on the lower third of her face, there is a possibility that PCOS is the cause.

With hormonal irregularities, it is not uncommon for women to develop cystic acne, which are hard bumps under the skin. These knots are painful and often occur on the jaw, chin, and around the mouth.

However, making a trip to the doctor’s office might be challenging if the next sign of PCOS develops…

One of the most commonly reported symptoms among women with PCOS is fatigue. This common side effect may be the result of many factors related to PCOS.

The primary symptom of B12 deficiency is—you guessed it—fatigue. If your thyroid is causing fatigue, there are many medications available to treat an under-active thyroid that can improve this symptom.

PCOS can affect different people in different ways. Some might lose their hair while others have the complete opposite problem…

Another common symptom of PCOS is unwanted body hair, typically in a male-growth pattern. Unwanted hair growth, while not harmful physically, can damage a women’s self-esteem and body image, affecting mental health.

This symptom is often accompanied by hair loss and acne because, like those symptoms, it is caused by androgens. Male hormones tend to cause problems that have male characteristics and excessive hair growth, or hirsutism is one of them.

Unfortunately, PCOS can take a toll on someone’s mental health as well as their physical health…

Anxiety and depression are common symptoms of PCOS with over a quarter of all women with PCOS reporting it. Although the connection is not fully understood, these conditions are treatable.

Not only are many of the symptoms of PCOS treatable, but so too are depression and anxiety. If someone is struggling with depression, she should speak to her doctor or a therapist. Both can provide care for depression or anxiety and give the patient the tools she needs to overcome them.

The following symptom of PCOS? It’s a real pain…

When you develop multiple cysts or have an enlarged cyst, the ovaries may swell and become inflamed. Typically, ovarian cysts are asymptomatic and resolve on their own. However, if the pain is intense or accompanied by bleeding, seek emergency medical attention.

If all of these symptoms sound exhausting, that’s because they are… which can lead to the following classic PCOS symptom…

In women with PCOS, estrogen tends to dominate the cycle and weaken progesterone levels; this balance is important for avoiding headaches, among other unwanted side effects. This process means that when hormone changes happen, the drop of estrogen can be severe and cause headaches more frequently.

PCOS is no fun, and the following might just be the most tiring symptom of them all…

Sleep problems, particularly sleep apnea, are more common in women with PCOS. There are several theories for why women with PCOS have sleep apnea and other problems sleeping, including obesity, diabetes, stress, anxiety, and depression. Obesity and diabetes significantly increase your chances of developing sleep apnea, too.

What’s most important for someone who suspects they have PCOS to know?…

PCOS and Its Symptoms are Treatable

PCOS doesn’t have to be a scary diagnosis. Often all it takes is a healthy diet, and exercise to drastically improve your symptoms. Your doctor can advise you on which diet is healthiest for you and even give you exercises that are proven to help people with insulin resistance lose weight more efficiently.

Regular blood tests and following up with your doctor regularly will help you maintain your health and prevent many of the side effects caused by PCOS. Don’t be afraid to ask questions to better understand your health and treatment.