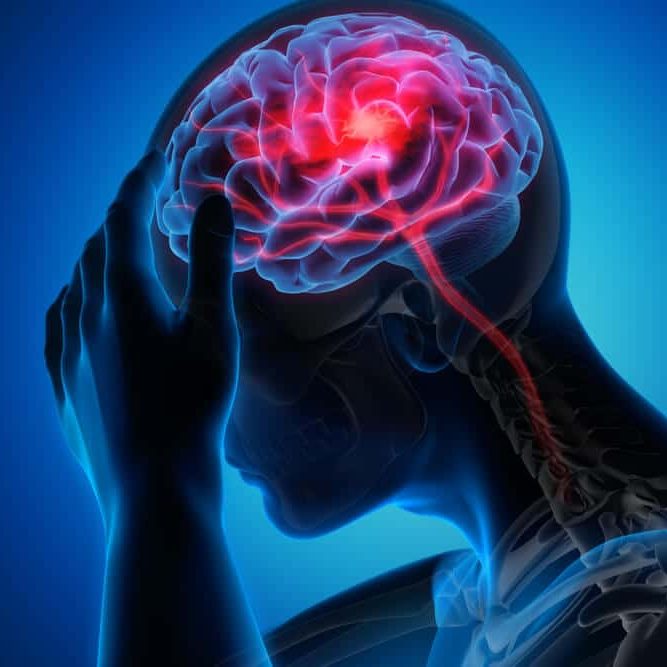 A migraine is a headache that can cause severe throbbing pain or a pulsing sensation, usually on one side, often accompanied by nausea, vomiting, and extreme sensitivity to light and sound.

According to the National Headache Foundation, approximately 28 million Americans suffer from migraines. When a migraine occurs, overactive nerves emit signals that cause the brain’s blood vessels to constrict and then expand. This rapid adjustment produces a painful sensation that throbs or pulsates.

Considering how debilitating these headaches can be, it’s no wonder millions of Americans are searching for ways to stop migraines in their tracks.

One of the first ways to mitigate the pain of a migraine? To know when one is about to hit. Migraines come in two basic varieties: with or without an aura.

Symptoms of an aura include:

One of the most common signs of migraines is a headache starting out as a dull aching sensation that develops into a throbbing sort of pain. This pain might start on one side of the head and migrate to the other, it might be isolated to the front of the head, or it could feel as if it were impacting the entire head. Typically a migraine headache is exacerbated by physical exertion.

Migraines are often accompanied by other signs and symptoms as well, including:

In much rarer cases, a migraine can also be accompanied by fever.

While doctors are unsure of the precise causes of migraines, they have observed a relationship between migraines and certain changes in the brain. Typically, what causes or “triggers” a migraine can vary by individual.

Many factors can trigger migraine headaches. Among them, the most common are stress and fatigue. Sudden or extreme weather changes, such as strong winds, storm fronts, and changes in altitude or barometric pressure, are also common migraine triggers.

Certain foods can trigger migraines in some people. Common food triggers include aged cheeses and foods that contain additives like MSG (monosodium glutamate) and nitrates (found in foods such as hot dogs, pepperoni, and lunch meats). On the flip side, a lack of nutrition, such as skipping meals altogether, can be triggering as well.

Alcohol and caffeine are other known dietary triggers of migraines. In the case of caffeine, migraines can be triggered by either too much caffeine or withdrawal from caffeine. Interestingly, caffeine can be an effective treatment for an acute migraine headache as well.

Other common triggers of migraines include:

The best way to treat a migraine, of course, is to prevent one from occurring in the first place.

The best way to do that is to avoid your known triggers. The best prevention technique is to learn what factors trigger your migraines and keep track of them. Discipline yourself to avoid these triggers, including managing your stress levels and making sure to get enough sleep.

For example, if a woman knows that she tends to get migraines around the time of her period, she can plan to take preventative medication around those times.

While migraines cannot be cured, they can indeed be quite effectively treated.

Treatment can include medicine for relief of pain as well as nausea. Pain relief medication for migraines can include over-the-counter drugs containing aspirin, acetaminophen, ibuprofen, and caffeine.

One danger with taking OTC medicines for migraine pain relief is that they can have the opposite effect: exacerbating the pain instead of relieving it, especially if too much is taken. Migraine sufferers can become dependent on such medicines or develop rebound headaches from taking them.

If you’re taking OTC medicines for migraine pain relief more than three times in a given week, your doctor may be able to prescribe you a different medication that works more effectively. Doctors can also prescribe medicines to combat nausea associated with migraines.

More holistic approaches to treating migraines include biofeedback and magnetic stimulation. With biofeedback, the individual learns to identify the stressors that trigger migraines and use special techniques to thwart the migraine before it fully develops.

Magnetic stimulation uses a transcranial magnetic stimulator (TMS) placed on the back of the head at a migraine’s onset and delivers a magnetic pulse to the brain that can reduce or halt pain altogether.

Prescription medications are also available to help treat migraines. Some of the most popular include:

Also known as erenumab, the FDA approved this medicine in 2018 for the prevention of migraines. It’s a group of CGRPR antagonists, which means it can prevent CGRP receptors from connecting with CGRP, which is thought to be a major factor in causing migraines.

Also known as fremanezumab, this option is an injection that may help prevent migraines for some people. Patients can either receive these shots from a physician or take them at their homes (after a doctor first explains the procedure properly).

Also known as galcanezumab-gnlm, this medication is taken once a month via injection. It also targets CGRP in the brain and binds to them—rather than the CGRP receptor, as is the case with Aimovig—to prevent them from binding with receptors. This reception is thought to play an important role in the creation of migraines.