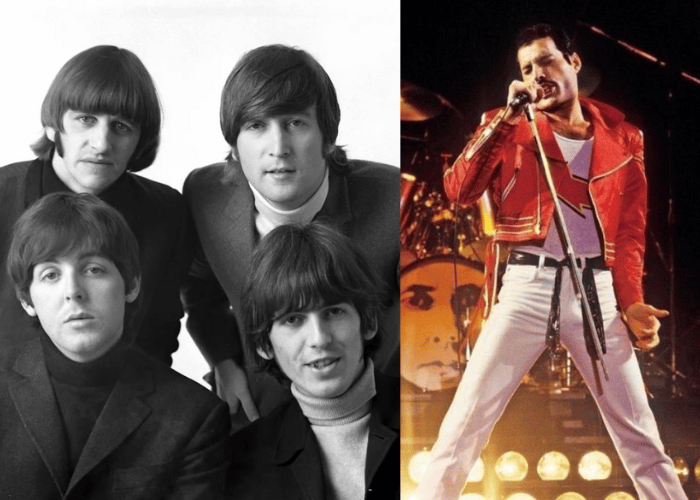 Without a doubt, rock and roll has changed the world, and remains one of the most popular music genres of all time. Over the years, countless rock bands helped rock achieve its legendary status with their rapid tempos, epic drum and guitar solos, and talented lead singers.

From the British Invasion to the glory days of the 80s hair bands, here are just a few of the greatest rock bands of all time. See if any of your favorite bands made the list!

The Beatles came into the music scene right when the world needed  exhilarating rock music the most.

You can’t talk about rock bands or music in general without The Beatles finding their way into the conversation. These guys broke records, topped charts, and sold millions of records worldwide.

The Beatles are undeniably one of the greatest rock bands in human history. They experimented with different genres of music, started different pop culture trends, and inspired other rock bands who took inspiration from their work. Their hit songs are; Come Together, Let It Be, Hey Jude and Something.

When Keith Moon from The Who claimed that The Yardbirds will fall like a lead balloon, he didn’t know his words would spur them to become one of the greatest rock bands of all time. Despite the ups and downs, the Yardbirds became Led Zeppelin and showed Keith and the entire world they had what it took to be superstars.

Whole Lotta Love, Stairway to Heaven, Black Dog and Kashmir are some of their best selling songs.

The Rolling Stones have seen good and bad times, and they are still standing strong. They are one of the most popular rock bands that are as relevant today as they were in the 90s. What can we say, we still love having them around.

Some of their remarkable songs include Gimme Shelter, Sympathy for the Devil, Paint It, Black and  Wild Horses.

They weren’t just a band, they were pacesetters and agents of change. They used their music to address issues in the society and they were fearless. They made psychedelic space-rock and blues-based progressive rock popular.

They were inducted into the Rock and Roll Hall of Fame in 1996. Their best albums are The Dark Side of the Moon, Wish You Were Here, and Animals.

When people talk about rock bands, they picture weird-looking guys in weird outfits, living life on the edge. But U2 came and showed the world you could be a rock artist, break records, and top charts, without being outlandish. They raised money from their concerts to help millions of people around the world. Their catalog of music boasts of songs exploring romantic love, spiritual faith and social justice. Songs like One, I Still Haven’t

Found What I Was Looking For, Beautiful Day and Sunday Bloody Sunday are  classics that age well like fine wine.

Aerosmith came into the rock music game and made fans fall in love with their style of music – blue-based hard rock. They truly earned their “America’s Greatest Rock and Roll Band ” by selling more than 29 million copies of their Toys in the Attic and Get Grip albums alone. Their song I don’t Wanna Miss a Thing was even featured in the 1998 film, Armageddon.

Aerosmith has numerous awards and accolades to their credits including Grammy, VMA, and Billboard Music Awards. There is no stopping this band who are still putting out music and going on tours.

They did not just lay down a blueprint for a new hard rock sound, their work ethics made them one of the best in the game. And their chemistry was so inspiring. You see, they were so dedicated to their crafts that they played in venues other artists looked down on, including a high school. They influenced other popular bands like Metallic, Foo Fighters, Guns N’Roses, and many others.

They sold over 50 million copies of their popular albums Highway to Hell and Back in Black, making them one of the best-selling bands. They were inducted into the Rock and Roll Hall of Fame in 2003.

While most English bands tried to be like The Beatles, at least better than them, The Who took an entirely different path. Their music focused on teenage crises. The Who is one of the legendary bands with impressive instrumental skills and electrifying live performances. Their songs like Baba O’Riley, Love, Reign O’er Me, A Quick One, While He’s Away, and Won’t Get Fooled Again are some of their best songs. And in 1990, this badass band was inducted into the Rock and Roll Hall of Fame and in 2005, the UK Music Hall of Fame.

Guns N’Roses did not just pioneer the hard gritty sounds we have come to know as hard rock, their music, lifestyle, and attitude became an important part of rock and roll culture.

Despite their chaotic history, the impact Guns N’Roses has on rock music is undeniable. They are so addictive that you can’t get enough of them or their music and they were duly dubbed ” The Most Dangerous Band in the World”.

November Rain , Sweet Child O’Mine, Estranged and Rocket Queen are some of their popular songs.

At a time when glam rock was the rage of the moment, Metallica entered the scene with fast tempos, aggressive sounds of distorted electric guitars, and energetic singing. They completely changed the heavy metal rock genre and made it incredibly popular today.

They have 8 Grammy awards to show for their influence on the metal music we know today.

Their popular songs are One, Master of Puppets, Fade to Black, Orion and a host of others.

Nirvana made alternative music popular at a time when metal rock was stale. They hopped on the scene with a style different from what was in vogue. Their sound was a dynamic contrast between quiet verses and loud choruses, fusing pop melodies with noise. They were known for their songs About a Girl, Smells Like Teen Spirit, Come as You are, All Apologies, and loads of others.

You’ve got to admire the Eagles- in the age where hard rock and heavy metal were the raves of the moment, they made the country rock genre popular.

They have amazing songs like; Hotel California, Desperado, Take It Easy, and many others in their catalogs.

Songs like Casey Jones, Truckin, Touch of Grey and Friend of the Devil are some of their highest charting songs.

Like their name, they are hot stuff, selling over 120 million records worldwide, having 13 songs top the Billboard charts,and winning 6 Grammy Awards.  RHCP know their stuff, thrilling us with their amazing sound that is a fuse of elements of rock, pop, punk, and psychedelic genres.

Their famous works are Under the Bridge, Blood Sugar Sex Magix, and Carlifornication .

While other bands sang about love, sex, money, and fame, Black Sabbath’s lyrics were horror-inspired.  Their occult themes and down-tuned guitars made them stand out from the rest of the bands. Their dark music didn’t stop them from garnering fans from all over the world and selling over 70 million records.

They are ranked as the “Greatest Metal Band” of all time by MTV and were inducted into the UK Music Hall of Fame in 2005 and the Rock and Roll Hall of Fame in 2006. And in 2019, they were awarded  the Lifetime Achievement Grammy Award. Some of their notable songs are War Pigs, Paranoid, Iron Man and Sweat Leaf.

There are so many reasons why Rush is on this list – their songwriting skills and musicianship were one of the best, they were down to earth despite their huge success and they had a unique bond that is absent in other bands.

Songs like Tom Sawyer, 2112, Limelight and Working Man are some of their commercially successful songs.

Deep Purple, Black Sabbath, and Led Zeppelin are the godfathers of British hard rock and heavy metal. One thing about Deep Purple, they were so loud that they were cited as the loudest band in the world by the Guinness Book of World Records in 1972. And boy, did they know how to get the guitar riffs. Some of their hit songs are Hush, Space, Perfect Strangers, Burn, and many others.

A sports event is not complete till you hear Queen’s “We are Champions” blasting from the speakers. That is how legendary these guys are. They were and still are the kings of arena rock music. Songs like Bohemian Rhapsody, We are Champions, We will Rock You, are popular arena rock anthems.

With their painted faces, weird costumes, and superhero names, Kiss became a force to reckon with in rock music. However, the best thing about them are their concerts. You are sure to have the most exhilarating time of your life at a Kiss concert. They sold over 100 million records, earning membership into the Rock and Roll Hall of Fame.

Their best songs like Rock and Roll all Nite, Detroit Rock City, Deuce and God of Thunder have become famous rock anthems.

They brought the swagger, the shredding guitars, and the long-haired aesthetic that came to define heavy metal band artists.They improved heavy metal rock with catchy melodic hooks and brilliant production. They were the most successful of the heavy metal British bands in the early 1980s. Photograph, Rocket, Foolin, and  Animal are some of their best works.