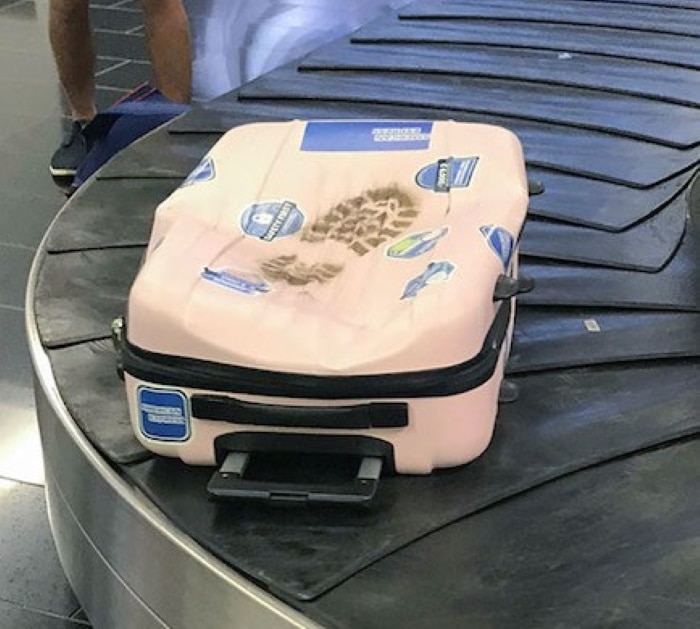 There are few things worse than going on a trip and having an airline lose your luggage. However, in the event that your bag gets misplaced, having it returned can be both a happy and horrible experience. Though baggage claim employees do their best, accidents happen, and sometimes items are returned ripped, ruptured, or worse.

From busted laptop screens to damaged dry goods, here are just a few times people got their luggage back in pretty bad shape.

Traveling is always exciting, but when traveling by plane always be ready for what the airlines can do. This person got their suitcase back patched up in “one piece” with none of his/her clothes inside. If you are wondering what happened, there’s no answer or any reasonable explanation from the airline.

Working remotely also has its risks. We all know that when working remotely laptops are of outmost importance. It’s an integral part of a remote working office space and the worst thing to happen is putting it in jeopardy. This is exactly what happened here. His laptop and luggage got run over and so did his remote working situation.

When going on a surf trip your surfboards are carefully selected and always taken good care off when packing them. But the airlines don’t seem to have that same mentality. This is the worst case scenario. The person’s wetsuit, surfboard, and board bag got damaged all at once. Hopefully the boards are still rideable.

The most suspenseful moment when traveling and arriving at your destination is waiting for your luggage at the luggage carousel. It takes a long time for it to arrive or sometimes it doesn’t even arrive. But in this case only the handle arrived. Unfortunately, you can’t do much with that.

Bags are packed, tickets are booked, ready to travel. And now you’ve arrived at your destination and you get your luggage from the carousel. Well, you gotta make sure it’s your luggage. In this case it kinda looks like your luggage and it is, only in much worst conditions. If you are thinking it only happens once, it doesn’t.

Seeing the bright side of things is rare and even rarer under these circumstances. This guy’s clothes and bag look like they were put under a shredder. We are all asking what happened there, but this guy was able to make the most of this horrible situation. Designers would pay a million bucks for this style.

If you ever wondered what’s the purpose of a hard luggages. Then here’s your answer. Not sure what this bag went through, but it was not strong enough. From the looks of it, it also appears that the clothes inside the luggage went missing. It appears that someone put that luggage to test.

Let’s the say you plane is about to leave and you happen to get a window seat. Naturally, you’re starring out the window as the plane is about to fly and you encounter a luggage in the tarmac. You take a closer look and it’s your luggage. Warning: It also looks like the driver is circling around to run it over. Road rage exists even in the tarmac of an airport.

Bags out in the rain

You packed your bag with some fragile things. In case you weren’t worried, you should be worried after seeing it under the rain. It’s a hopeless sight to see, especially if you are sitting in the window seat. But at least your not alone. It’s apparent that basically everyone’s bag is under the rain. Not much to do there.

Another one bites the dust

Delta Airlines can be blamed for ruining this person’s luggage. It’s always the airline’s fault. To worsen the situation, the airline had the guts to ask the passenger for the receipt. That’s one way to ruin the airlines reputation. If this person didn’t file a claim at least this picture does the justice.

Everyone wants to travel to California. Specially San Diego, where the sun is ever shinning. If you thought people in California were relaxed, think again. This baggage inspection didn’t go as expected after this passenger received his/her bag completely destroyed. It was more of a bag destruction than a bag inspection.

In this case, it could be considered a theft rather than an airline carelessly dealing with people’s belongings. This is probably ilegal and we can only hope that everything is still intact inside his/her bag. If not, then this situation should be resolved on a court. Hopefully, this person lawyered up. After a long flight, that’s the last thing we could imagine.

More claims and no answer

It’s become a trend of customers using social media to expose their complaints. Specially when the complaints are related to the airline’s irresponsibilities. This scenario is overplayed, another tarnished bag and another unhappy passenger. This women did everything possible to resolve the issue. Yet nothing came out if it. Sometimes persistence is useless.

You’re excited for a snowboarding trip with your friends. Tickets are booked, snowboards are packed and now it’s time to go. Then, you arrive at your destination only to get your bags back looking like Freddy Kruger got mad at it for some reason. This is one way to put a board bag to test.

Your luggage was lost while traveling, don’t worry Sprit will assume it was their fault by giving you a set of toothbrush, toothpaste and a razor. Just the basics. Compared to other examples here, it’s better than nothing and the little note makes you feel even better (or not). That person is probably still wondering where the bag went, but it’s there in spirit (pun intended).

This is another example of the dangers of remote working. Checking your laptop in your suitcase is a common mistake done by many travelers (as seen before). This serves as a lesson to never do it again. This traveler’s Macbook looks like it got stabbed a few times by Michael Myers, perhaps he got jealous at it.

The ashes are gone

This is perhaps the most disrespectful situation of them all. TSA thought something was odd with this traveler as he’s traveling with his mother’s ashes in his bag, but forgot to seal the bags with the ashes after checking them. This is an unbelievable scenario and this person should’ve also lawyered up.

This suitcase looks like it was thrown inside the airplane’s engine or someone tried to cut in half using a chainsaw. Maybe the Texas Chainsaw Murder got mad at this bag for looking so ugly. On the bright side, the zippers are still working, so maybe patching it up might save this guy some money.

Where did the games go?

Moving to a different country is a very exciting time in someone’s life. In this situation, this person made sure to bring a videogame along for the trip. To her disappointment, neither her games nor videogame arrived with her. Apparently, the “airport people” stole it all. There goes her childhood dreams.

There’s a saying “a good traveler never leaves footprints.” Here, things got a little out of control. The traveler in fact didn’t leave any footprints but someone else did leave a footprint in his bag. There’s proof that an “airport person” did that, the footprints don’t lie. And maybe a toothbrush kit would make this person feel better.