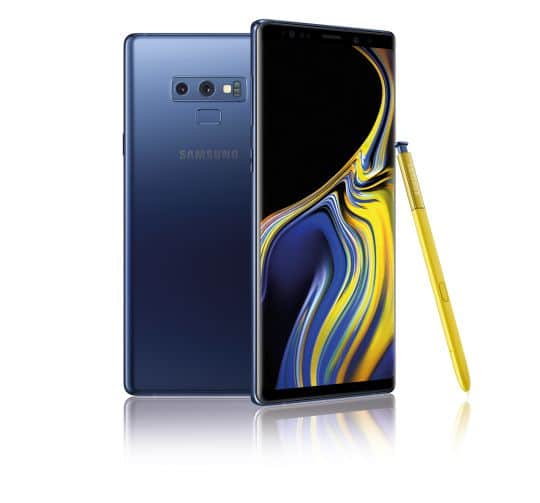 Samsung officially unveiled their latest smartphone, the Galaxy Note 9 in New York on August 9 at their Unpacked event. As UK and US consumers wait for the official August 24 release, here are a few things to know about this smartphone.

This phone has a 4000mAh inbuilt battery, designed to last for up to 24 hours. This is an improvement over the Note 8’s 3300mAh power battery.

This new smartphone has a 6.4 inch screen, slightly larger than the Note 8’s 6.3 inches, although the two have a similar aspect ratio. The Note 9 also maintains the Super AMOLED Infinity Display.

As for screen resolution, the Note 9 has Quad HD+ display with 561ppi pixel density and Mobile HDR.

The back camera has a dual lens with 12 megapixels. It also comes equipped with a telephoto, 12 megapixels, both with 2X optical zoom and digital zoom. The front camera is 8 megapixels.

During a photo shoot, its camera uses intelligence to optimize the subject and scene after identifying them. Simply put, this camera can detect flaws like blurriness in an image and inform a user of such shortcomings, giving the photographer a chance to take a better shot. Its dual aperture lens adjusts itself as light changes.

When it comes phone security, the Note 9 keeps it local with the Knox-security platform and security options like fingerprint identification and iris scanning, as well as other facial recognition technologies.

This phone has two storage options: 128GB and 512GB. The latter is an upgrade from the Note 8’s 256GB. Individuals who require more storage can use an SD card with as much as 1TB expandable memory.

There are some slight differences with the S Pen from the Note 8 to 9, with the biggest change being that this new S Pen is a remote control and Bluetooth enabled. Some of the enabled controls including music playing, app launching, and photo taking.

The S Pen in the Note 8 used power from the phone’s display while the 9’s comes with its own battery. This upgrade allows users to do much more with the S Pen than in earlier versions.

This smartphone uses the Android Oreo (version 8.1.0) and also has Experience UX. It also has a 10nm processor with up to 1.2 gigabits of speed. It also has an in-built, performance-adjusting AI-based algorithm and water-carbon cooling system.

Samsung has stated they will release the phone in four different colors: metallic copper, ocean blue, lavender purple, and midnight black. The S Pen will be yellow. The initial releases will only be available in blue and purple.

Those who would like to pre-order can do so from Samsung’s official website and enjoy specific discounts.

Confirmed carriers and retailers of the Samsung Galaxy Note 9 in the US include Verizon, AT&T, T-Mobile, Sprint, US Cellular, Xfinity Mobile, and Best Buy (and, obviously, Samsung). With at least Verizon and AT&T offering buy one Note9 get one Note9 free, and incredible deal for this high-end phone.

Every carrier and retailer has a different offer attached to this phone. Generally, though, the device will go for around $999 for the 128GB option and around $1249 for the 512GB option.