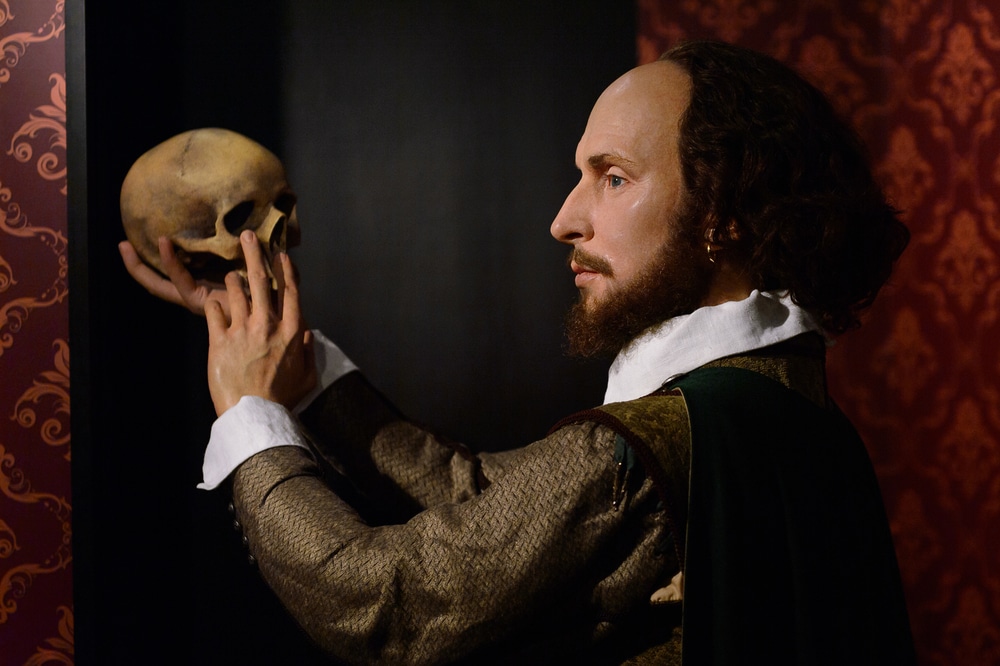 When you think of Shakespeare you probably think of Romeo and Juliet, Hamlet holding a skull while he says, “To be or not to be,” and a photo of the Bard himself wearing some ruffles around his collar.

You may also remember trying to read his plays in English class and thinking, “What the heck is this guy talking about?”

What if we told you you’re currently fluent in the Shakespearian language? If you don’t believe us, no problem. We’ll prove it to you. When we do, you are free to walk confidently in the direction of academics and theatre artists around the world by announcing your newfound kinship with Shakespeare. You might as well say you are as smart as he was because thou dost hold steady to the command of his lexicon!

Here are 10 words Shakespeare invented that you’re using every day!

That’s right! One of the most common words you use daily–bedroom–was invented by Shakespeare. He first used it in the comedic play, A Midsummer Night’s Dream.

Before good ol’ Will came along, people were calling the rooms where they slept their sleep spaces or bedchambers. We think bedroom does the trick just fine. If you’d like to add a little something extra to the experience of using this word, maybe you could hold a skull when you say it.

Picture it, Lord Capulet learns of his daughter Juliet’s death and he feels something stirring deep within his soul. It’s sadness, grief, dispair, and the opposite of comfort. We wish there was another adjective for that feeling.

Oh, wait. There is! It’s “uncomfortable.” Shakespeare coined this word when he wrote, “Uncomfortable time, why camest thou now / To murder, murder our solemnity?” This sentiment basically personifies time and asks him why he came to ruin the lives of the Capulet family.

Remember that sentence next time you want to be overdramatic about why your start time at work murdered your time spent sleeping in your bedroom a little longer.

The next word is also one you’ve used hundreds of times, you lofty scholar you.

When Brutus addresses the crowd in the play Julius Caesar, he says, “Romans, countrymen, and lovers, hear me for my cause.” In this usage, the word lovers means companions, comrades, and dear friends.

While that may not be the way you’re using the word, we’re certain you’ve used it with a slight variation.

Perhaps, you describe yourself as a lover of coffee. Or you call your partner your lover. Either way, when you speak this word you’re partaking in Shakespeare’s famous ability to encapsulate a whole mood into one word.

We invite all lovers of vocabulary to discover the next Shakespearian verbiage you doth use oft!

Hopefully, you don’t have need for this word very often. But we’re sure you’ve had to utter it at least once or twice in the past year.

Constance of Penthièvre, the mother of Arthur, says this word in the play, King John. She’s addressing a bunch of traders who said they would help her and then refuse to do so. We imagine she could have just said, “I am so mad at you guys right now because you’re weak and I can’t trust you!” Instead, she says this:

Thou cold-blooded slave,
Hast thou not spoke like thunder on my side?
Been sworn my soldier? bidding me depend
Upon thy stars, thy fortune, and thy strength?

In this case, the word means “without emotion or excitement, unimpassioned, cool; without sensibility, unfeeling, callous, deliberately cruel” (OED).

We call the fact that there are calories in delicious foods like pizza and tacos cold-blooded. Calories are cold-blooded servants of carbs.

Let’s move on to a much nicer word!

Shakespeare used this word as an adjective to mean well-bred, mannerly, and noble-minded.

In the play Othello, Desdemona says to her husband, “Your dinner, and the generous islanders / By you invited, do attend your presence.”

This basically means, “Hey, the guests are here.”

We enjoy using this word to describe kind-hearted people who give to others in a manner and/or amount that stretches the commodity given–whether that be time or money.

Imagine a young woman coming into a crudely made jail to lay fresh hay on the floor of the cells of two new prisoners. There in the dirty jail her father discusses the terms of her marriage with one of the prisoners. If that isn’t romantic, we don’t know what is.

In the play Two Noble Kinsman, Gaoler says to his hay-carrying daughter, “Your friend and I have chance’d to name you here, upon the old business. But no more of that now; so soon as the court hurry is over, we will have an end of it.”

In this context, the word means commotion, excitement, activity. He’s basically telling his daughter, “We’ll talk about you marrying this prisoner after the court stuff settles down.”

Next time someone wants to marry your daughter don’t be in a hurry to send her into a jail cell carrying hay. That’s just solid advice right there.

We don’t want to boss you around, but we do want to “manage” your attention by sharing the next word . . .

Shakespeare used the word “manage” to create the verb “manager.” That isn’t a super far stretch, but none of us thought of it first so he gets the credit.

He used the word to mean employer, user, handler.

In the play Love’s Labours Lost, Armado is in love with a lady named Jaquenetta. As in most of Shakespeare’s plays, love makes Armado lose his mind and start talking to inanimate objects. He says to his rapier and drum, “Your manager is in love.”

When we hear the word manager we usually think of Michael Scott saying, “Conference room, five minutes!” Or that time he got Toby busted for bringing a Caprese salad to work. We don’t start talking to inanimate objects though.

While we’re sure you’ve used the next word plenty of times in your life, we’re guessing you’ve not used it the way Shakespeare did.

When we use this word we’re usually using it to convey the idea of needing to give something to somebody. For example, “I borrowed $10 from my friend yesterday, so I owe her $10.” Shakespeare used it as a verb to mean the opposite.

In the play All’s Well That Ends Well, Helena says to Bertram, “I am not worthy of the wealth I owe.” In this sentence, the word owe actually means own, possess, have.

Going back to our example, we could say, “I owe $10 but I don’t really owe it because I have to pay my friend back.” Or something like that.

Let’s move on to a word that’s a little more fun!

Shakespeare was anything but silly. Even when he was writing comedy, he wasn’t silly. In Shakespeare’s lexicon, silly means helpless, defenseless, vulnerable.

In the play Henry IV, Part 3, the King says to himself, “Shepherds looking on their silly sheep.” We would share the lines that come before and after this line, but we’d be silly to explain it because the full context is confusing.

When we say something is silly today, we usually mean it’s sort of dumb, or nothing to be taken seriously. Good ol’ Shakespeare really knew how to take a word and make it his own. If intelligence is a “virtue,” he had it . . .

It’s Shakespeare’s world and the rest of us just live in it. In his world, the word Virtuous means potent, powerful, efficacious.

In the play Othello, Cassio (who was a friend to Othello) says to Desdemona (Othello’s wife):

I do beseech you
That by your virtuous means I may again
Exist, and be a member of his love
Whom I, with all the office of my heart
Entirely honor.

Put in plain terms this means, “Hey, since you’re his wife and he’ll listen to you, help me get back on his good side.”

Remember in the show Parks and Rec when Leslie used virtuous means to get some lights put in at the park where Jerry fell into the pond after he dropped a burrito? If so, you get the idea.

Let’s stop “gossiping” about Jerry and his burrito, and get to the next word.

In the play Midsummer Night’s Dream, Titania (a fairy) says to Oberon (another fairy), “Full often hath she gossiped by my side.” She’s talking about one of her servants. Long story.

The point here is that Shakespeare’s use of the word gossip is a verb meaning to be a close companion, talk together.

We think it’s much nicer to talk together with people instead of gossiping about people. Shakespeare agrees with us!